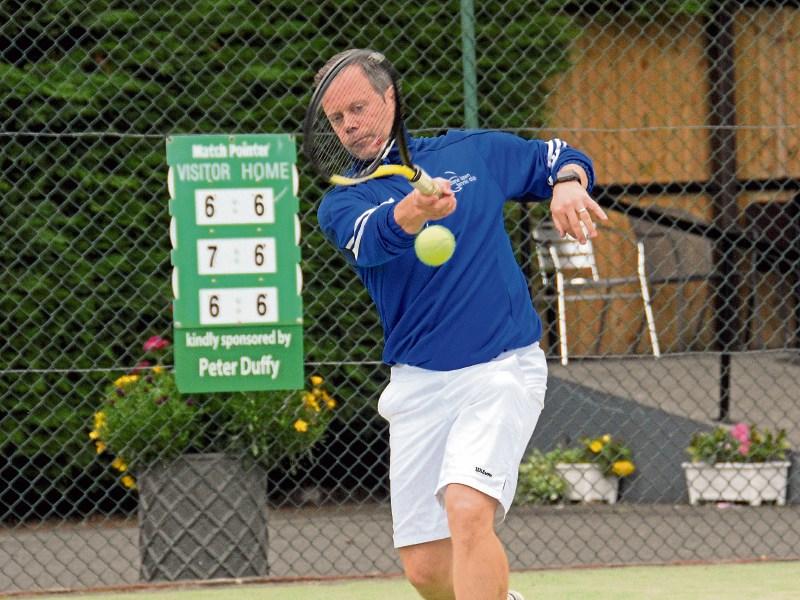 Clane Lawn Tennis Club is in its 45th year but up until now they have never been fortunate enough for anyone to represent the club at a higher level.

That has all changed with news that Clane stalwart Richie Mahony has been chosen to play with Leinster on behalf of the club.

Mahony came to prominence this year when performing excellently for Clane in the Dublin Leagues and as a result he was called to perform in the Duffy Cup with his province recently.

“I got the phone call about this team about three weeks ago now and I was told I had been selected to represent the Dublin Lawn Tennis Council and Tennis Ireland which is effectively Leinster against the Belfast equivalent.

“Its an annual event and apparently it has been going on for 71 years and it’s called the Duff Cup as opposed to the Davis Cup but its my Davis Cup put it that way.

The reason for my selection was because of our results in the Dublin Summer Leagues playing at Class 3 said Mahony when we visited the Clane Club last week.

“I play at number 1 in the Summer League and out of all the matches we would have played, I won all of mine and all these results get posted with the Dublin Lawn Tennis Council and they track it. The League is completely separate but the results are clearly being watched in order for selection for this team.

.”While Mahony has performed very well over recent years, getting the call was still a bit of a surprise as its never something he thought about and he didn’t know it even existed.

“It was a big shock getting the call as I didn’t really know what it was as we never had anybody in it.

“It’s only when you are close to it and get picked on it that you’d know about it.

“Our club has never had anybody represented on the team before whereas the bigger clubs in Dublin like Fitzwilliam, Clontarf and Riverview would know of this event as they have people possibly representing on the team every year because they have more strength in depth,” he said.

It’s a huge honour for the Clane Club to have someone reach this level and Mahony is more than proud to represent them.

“There are four men and four women selected from Class 2 and Class 3 and there is possibly hundreds you could choose from but is based on your recent results and they clearly monitor the database over a number of years and I have been playing in the Dublin Leagues since I was probably 15; I’m 41 now so 26 years later I finally got there.

“It’s a huge thing for the club, we have never represented at that level before so I’m honoured to be wearing the badge.”