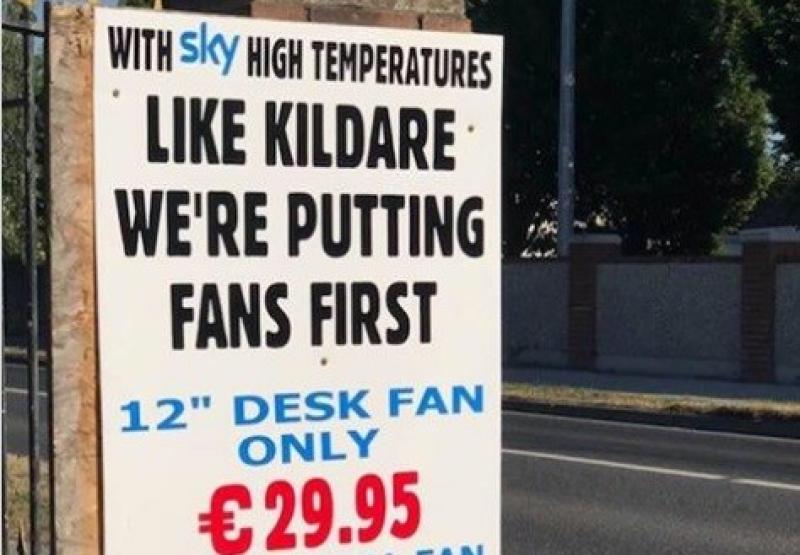 Apart from the serious sporting aspect of Kildare GAA's standoff with Croke Park, the web has been buzzing with funny and quirky tweets.

The famous Hairy Baby T-Shirt company has also got in on the act with lots of orders going in for these Newbridge or Nowhere tops.

Even Maradona was voicing his support

Maradona standing firmly behind #NewbridgeOrNowhere and sends a message to GAA HQ pic.twitter.com/YPGvkgVG9T

Support even came from abroad

Check out this interesting proposal

Can we get a tv camera in a helicopter following the Mayo team bus on Saturday?

Think of the nailbiting drama as they come up towards Enfield.

With the game going ahead at St Conleth's Park, here is something to look forward to

The smell of salt and vinegar chips flowin across the road from Cooks Cabin,
270 men trying to piss in one pot at HT
10,500 packed in like sardines in a tin,
Factor 30, Unreal atmosphere!
Pubs and shops benefit!
Kildare people standing together in unity#NewbridgeOrNowhere

Even the Pope is backing Kildare apparently

The Holy man himself backs @KildareGAA to play in Newbridge on Sat evening. #Newbridgeornowhere pic.twitter.com/9NIrNw9TaG

Newbridge native, 2FM's Keith Walsh is nailing his colours to the mast

Ruby Walsh on #NewbridgeOrNowhere : “In racing, they don’t decide to move a meeting to another course just because a race is looking to be better than they expected at the entries stage. Rules are rules.”

LATEST: Croke Park caves in as Kildare match set for Newbridge on Saturday