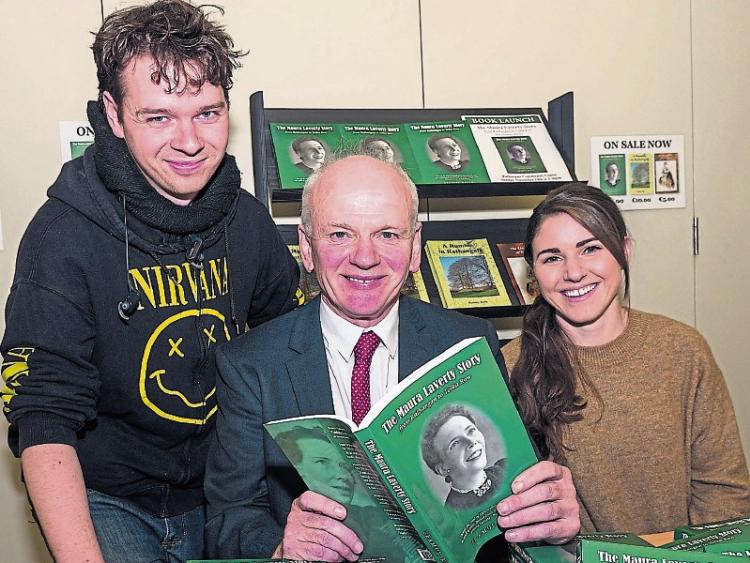 Author, Seamus Kelly, with family at launch of The Maura Laverty Story

Three of the four novels written by Kildare author, Maura Laverty, in the 1940’s were banned by the Censorship of Publications Board, according to Seamus Kelly, who is giving a talk on the writer in Heritage Week.

“There is  quite an amount of confusion  about how many of Maura Laverty  novels written in the 1940s. Nobody has researched in any detail the banning of Maura novels until now,” said Seamus, who said that three of her four novels were banned.

He came across the evidence on the banning of the  books, about which he will give reasons for and talk about  at the lecture, which takes place in Rathangan library on Thursday, August 22 at 6.30pm as part of the town’s contribution to Heritage week.

Seamus came across the banning issue when he was researching his biography of Maura,'The Maura Laverty Story from Rathangan to Tolka Row' which has been reviewed in the Leinster Leader by Liam Kenny. Copies can be ordered from email: james.a.kelly55@gmail.com

He said that today the four novels would be seen to be quite innocent. “At times Maura could have lessened her chances of being banned by being less direct,” he believes.

He told the Leader: “The Catholic press in America  gave Maura's work high praise but this had no impact at home with the censor. The fact that Maura wrote romantic novels and had a direct and at times controversial  and provocative way with words did not help her cause,” he said. He added that her having a foreign publisher even one as famous as Longmans did not help.

He said the Rathangan author was in good company.   Kate O’Brien, Sean O’ Faoláin, Samuel Beckett, Brendan Behan, Walter Macken,  Sean O’ Casey and Benedict Kiely wee among the writers who had works banned by the Irish censor.  So too did Ernest Hemingway, John Steinbeck and H.G Wells to name but a few.

“The year Maura laverty first book,  'Never No More,' about her native Rathangan came out there was a four day debate in the Senate  which castigated banned books like Eric Cross's 'Tailor and Ansty'. So her timing was not great,” he said.

Seamus said the war years were full of censorship  anyway.

“There was no appeal to the censor until 1946.   Several of Maura's books were unbanned eventually.  It took over ten years and more to decide that Maura Laverty's stories were not a threat to the moral welfare of the nation,” he said.

After what turned out to be her last book to be banned, 'Liffey Lane,  Maura turned very successfully to play-writing in the early 1950s.

One of these plays was  also 'Liffey Lane' and another was 'Tolka Row'. None of her plays were banned.

He also said that Maura had to write to the Minister for Justice to import a few copies of one of her Banned Books for her own use. “In retrospect, only,  being banned is nearly seen as "an accolade" - a description used in reference to Maura being banned by both Mary Kenny and Maeve Binchy. We probably owe banned writers like Maura a belated apology for the hurt and damage caused to their reputations by the Censorship Board,” he said.