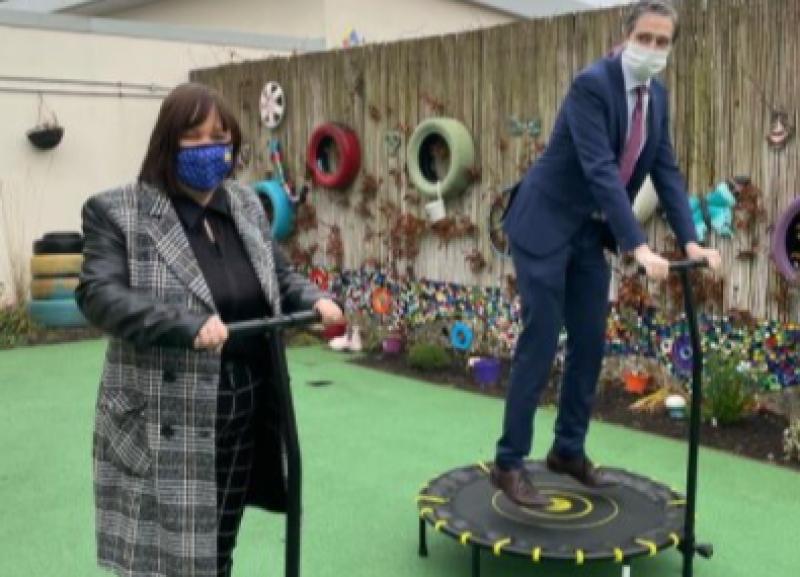 Two politicians from recently joined Minister for  Further and Higher Education, Research, Innovation and Science Simon Harris TD on trip to a school in Kildare.

Senator O' Loughlin added that they talked with David O' Dwyer about the new CAO portal, and also received a tour of the school's Acorn Unit, which is a specially-designed class for students with Autism (AS) which opened in September 2012.

Minister Harris also spoke to Transition year and Sixth year students at KTCS about changes made to the CAO website to enhance visibility of further education and apprenticeships.

Deputy Heydon also took to social media to thank Minister Harris for "engaging with representatives of Irish Horse Racing and Breeding Industry today in the Curragh Racecourse to hear about career pathways in the sector and discussing the potential to develop ambitious educational partnerships for the industry."

He also admitted defeat against Minister Harris in a game of "Robot Football."

Robot Football isn’t as easy as you’d think! Thank you to @NewbridgeYtdc staff & participants for a tour and exhibition of their classes today with @SimonHarrisTD @KWETB https://t.co/Ij6aj6bD0O

Minister Harris also met with fellow FG TD Bernard Durkan, and later went on to jokingly refer to Mr Durkan's call for the lotto to be investigated on Twitter: "Thanks to Bernard Durkan TD for the welcome to Kildare North this afternoon... He still hadn’t found the winning numbers though!"

While in MU, Minister Harris accompanied the university's new President, Professor Eeva Leinonen, for an introductory meeting and campus walk.

They also stopped to view progress on a €57 million Technology, Society, and Innovation Project on MU's North Campus, due for completion early next year.

Speaking on his visit to MU, Minister Simon Harris said: "The world is changing rapidly, but at Maynooth it’s clear the students are being equipped with the tools and skills they need to compete and thrive on the world stage, be it in technology, science, innovation or the arts."

"Maynooth is a university which has grown at an incredible rate since it was established almost 25 years ago, but as its numbers increased its desire to deliver excellence in education has never wavered."

He added: "I look forward to continuing to work with students, staff and the governing body to ensure the university continues to play an integral role in the region."

Prof Leinonen said: "I am delighted to welcome Minister Harris to our campus."

"I hope this meeting will be the first of many collaborative engagements over the coming months as we work together in the interests of educational advancement and societal progress."

She continued: MU is located in one of the fastest growing demographic regions in Ireland.

"Our rapid enrolment growth and the diversity of our student population, combined with academic excellence and impactful research innovation, are strengths that are critical to Ireland’s future.

"MU will continue to play a significant role in preparing for next-generation Ireland," Pro Leinonen concluded.