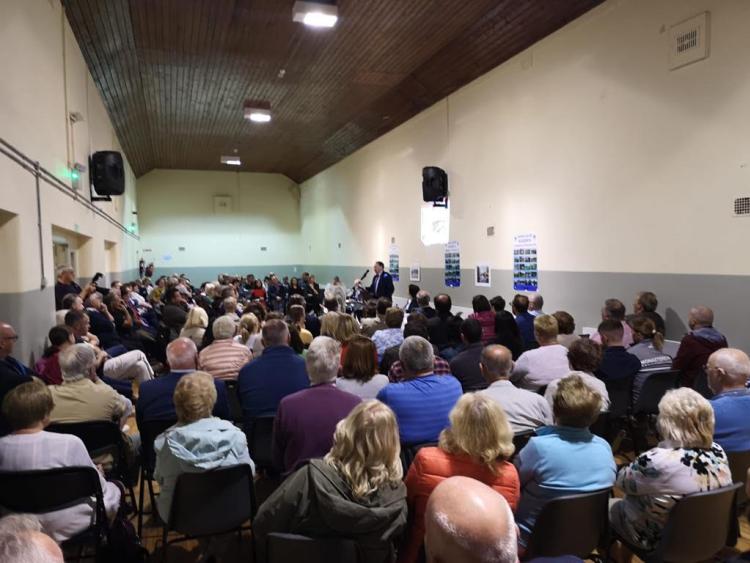 Meeting to discuss the Blueway in Monasterevin last night

A large crowd in attendance at a very positive meeting in Monasterevin last Thursday night, August 29, chaired by Kildare South TD Martin Heydon highlights the huge interest in the potential of the proposed Barrow Blueway.

The proposed Barrow Blueway is a 46km walking and cycling trail along the towpath of the Grand Canal Barrow line from Lowtown in Robertstown through Rathangan, Monasterevin and Athy.

The project received planning permission in April of this year and is now awaiting a funding decision from the Rural Regeneration Fund under Project Ireland 2040.

When completed the Blueway will allow both locals and visitors to travel from Athy to meet the grand canal greenway and onwards to grand canal dock in Dublin.

The large crowd in attendance learned of the experiences of Waterways Ireland in developing other Blueways around the Country from its Director of Development and Marketing John Boyle.

Director of Services from Kildare County Council Joe Boland set out the Councils role as lead partner on the project together with Waterways Ireland and Laois County Council.

Meanwhile Minister with responsibility for Waterways Ireland Josepha Madigan outlined how the Blueway project could be of benefit to the local communities, bringing new energy to areas along the route and helping to retain people in rural Ireland as well as bringing tourists to stay in South Kildare.

Chairman Deputy Heydon concluded that the large crowd in attendance and positive feedback from all communities was a 'great start to the project and that working together all communities could benefit from this exciting project.'