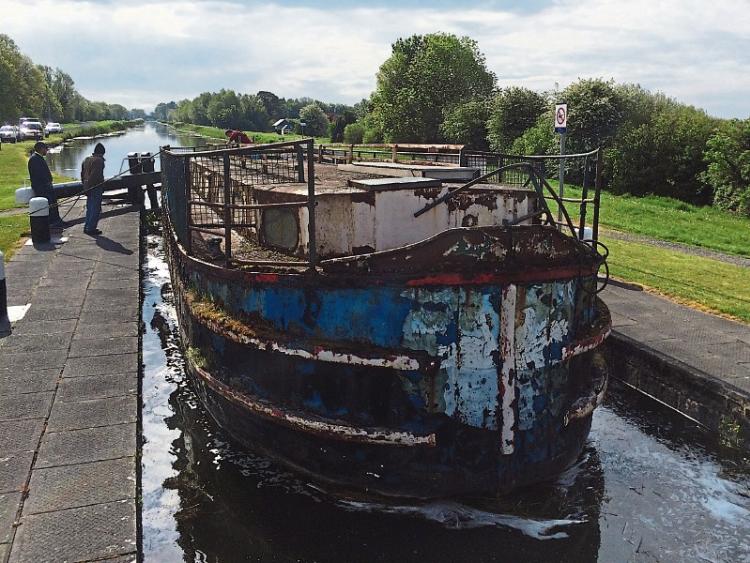 A barge synonymous with Robertstown is currently on its way to Portaneena, a dry dock near Athlone.

The point of the journey is to evaluate the next step in the storied history of the 52M a barge that was originally built by the Grand Canal Company in 1928.

Over the course of its 91 years the 52M has gone through numerous owners, been sunk twice and carried everything from porter, sand, gravel and the Roses of Tralee.

It spent the first half of its life in south of Kildare in Graiguenamagh, Shannon Harbour and Killaloe.

It sank in the Shannon near Parteen in 1942.

In 1959 it was bought by Roadstone where it was used on the Suir to carry sand and gravel.

It sank once again in Mooncoin in Waterford in 1969 and was purchased for €350 by Robertstown Muintir na Tire.

In the early 70's it was relaunched and re-named the Eustace in recognition of Colonel Charles Eustace, a former Chairman of the court of directors of the Grand Canal.

And for several decades after that it was used for days out, weddings, the Rose of Tralee and a film starring Gabriel Byrne.

By the late 1980s the glory days had passed for the 52M's sister boat, the 107B, rescued and brought to Robertstown at the same time. It was severely damaged by fire and lay is a state of disrepair for a number of years.

However, the 107B found its third lease of life when it was eventually transferred to the Offaly Branch of the Inland Waterways Association of Ireland who dutifully restored the vessel for the benefit of various interest groups in the early 2000s.

Unfortunately, during the intervening period, the 52M fell into a state of disrepair and in 2017 the vessel once again found itself sitting on the bed of the inland waterways of Ireland, this time in Lowtown near Robertstown.

Channelling the vision of the late curate of Allen parish, Fr PJ Murphy, that the 52M can be used as a heritage museum and provide guided tours of Kildare’s inland waterways Robertstown Community Amenities Association hopes to provide heritage tours to schoolchildren, members of the public and community groups in the surrounding areas.

It is envisaged that the tours will reflect the tours previously offered by the 52M and will encompass a first taste of cruising along the inland waterways, locks and mooring buoys.

In addition, the group hope to promote the folklore and heritage of the Robertstown community by installing informative museum displays during the restoration.

The barge is now in Portaneena in Westmeath, where it will get a full survey and be restored.

Some funding has been provided from the Drehid Community Funds, and the group is applying for more with the assistance of local county councillor Daragh Fitzpatrick, whose father, the late Michael, was a big advocate for the boat.

The news comes as the canals enter a new era of use in the coming years with the arrival of Greenways which are expected to see thousands of tourists and commuters traversing the canal banks every week.

It is also expected to bring considerable prosperity to canal communities.