A KILDARE MAN IN LONDON: We’ll miss this Cheltenham legend when he retires

Robert Mulhern on the career of one of Kildare’s greatest sportsmen, Ruby Walsh 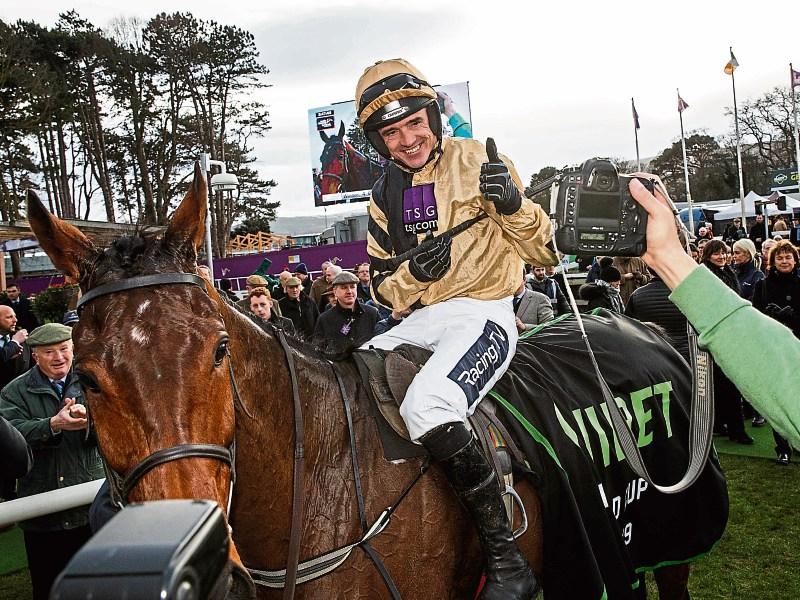 It’s one of the great privileges of this job that you get to attend major sporting events and the Cheltenham Festival is an annual highlight.

Read also: Tributes to retiring Kildare court manager, who was welcomed to Naas by Sean Connery

I’ve done the opening day of 10 of the last 11 festivals, and my standout memory remains the 2013 edition when Ruby Walsh rode a remarkable hat-trick of wins on Champagne Fever, Hurricane Fly and Quevega.

It was the most miserable of afternoons weatherwise but I can’t think of any comparable sporting occasion when I was left so stirred by excitement, so captured by the drama and so appreciative of the talents of the sportsman who helped deliver those feelings.

One, who’s career runs an exhaustive list of such afternoons — Ruby Walsh.

I couldn’t make Cheltenham this year and already I’m feeling nostalgic for Ruby Walsh, so long Cheltenham’s leading man, but for how long more?

I don’t know is the answer to that question, and aged 39, and with a career weighed heavy with injuries behind him, any triumphs this week should be savoured because nothing brings someone’s contribution into focus like idea they may not be around much longer.

And in that sense we enjoy a strange relationship with Ruby Walsh in Kildare where often, his sometimes surly persona is the first point of discussion not the greatness of his career.

On occasion, I too have been guilty of the same charge and I’m really struggling to figure that one out.

Because unlike other counties, Kildare are without an All Ireland in either code for more than 90 years at senior level.

We’ve no great soccer tradition, no Sligo Town, nor a Dundalk. Our successes are modest compared with other counties when it comes to field sports yet we complain loudly when results don’t go our way.

Into this void falls one of greatest jump jockeys the world has ever seen, every ounce a winner, but over time we’ve become less and less impressed.

Someone from Cork once said to me that if Ruby was theirs, they’d erect a statue of him at the top of Patrick’s Street.

But horse racing aside we forge a different sports star in Kildare, typically ones without the kind of grit and resolve needed to dominate at the highest level in the fashion, like, yes — Ruby Walsh.

Ruby has ridden 58 Cheltenham Festival winners at time of writing (prior to last week's festival). And it’s a running total that dates back to Alexander Banquet in 1998.

This was a time when the world was still getting used to push button mobile phones.

His successes have punctuated our sporting lives for two decades and this 21-year tenure at the top has been so long and so consistent, that we’re all very guilty of taking his talents for granted in Ireland and Kildare in particular.

It could be the case that we’re pretty shabby when it comes to celebrating our own prophets.

And ironically that is exactly just how Ruby Walsh is perceived in Britain.

I think now of Kempton Park in 2011 when he rode the famous Kauto Star to a history-making fifth win in the King George VI Chase on Boxing Day, that most English of racing afternoons.

And how afterwards, Ruby cantered back and forth along the Grand Stand for some minutes to receive the adulation of the audience, his audience.

Even watching on TV, the connection between sportsman and sporting public felt tangible.

Of course countless such embraces have followed Ruby’s innumerable flourishes at Cheltenham, but that kind of scene at Kempton always made me feel that Ruby’s persona made a better fit in Britain where he’s consistently elevated for the kind of qualities not celebrated at home.

Uncompromising, steely focused, a born winner with an allergy for bullshit, I have to say I rate people with those qualities, very highly.

But so too can we use words like brusque, curt, dismissive and impatient to describe Ruby Walsh.

Less flattering certainly, but really, irrelevant in the bigger scheme of things.

I’m telling you, we’ll miss him when he’s retired. Because our sporting history is anything to go by the void is going to get a lot darker.