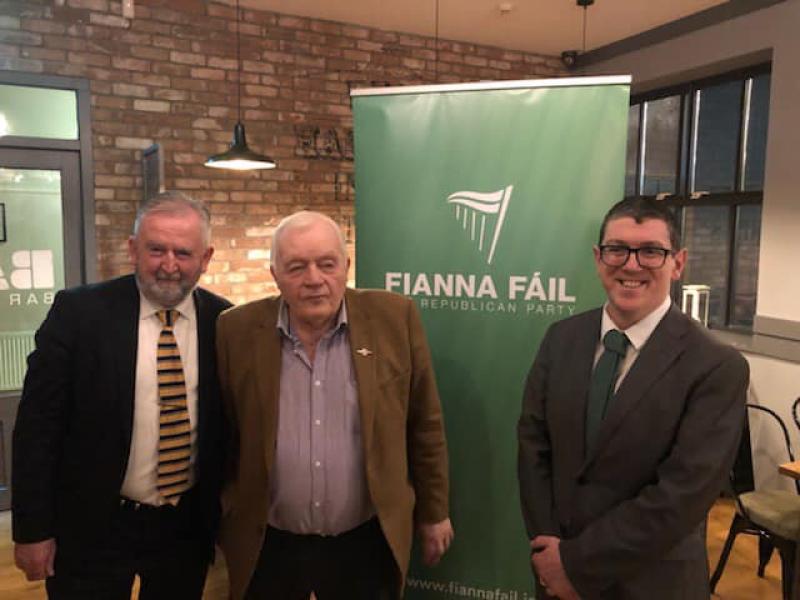 Former garda inspector Patsy Glennon, sitting councillor Cllr Pat Doran and John Mullen who all secured the nomination to run for Fianna Fail at the next local election.

Former Naas Garda inspector Patsy Glennon has been selected to contest the forthcoming local elections for Fianna Fail in Wicklow.

A native of Hollywood, where he still lives to this day, he retired from the Gardai in January of 2018 having served in Blessington, Tinahely, Baltinglass, Bray and Naas.

In more recent years he would have been better known for prosecuting on behalf of the State at the Wednesday sittings of Naas District Court.

Following his retirement he continued his legal studies and qualified as a barrister in October of last year.

He has also pursued his life long passion for Fianna Fail and secured a nomination to contest the local elections, alongside sitting councillor Cllr Pat Doran and John Mullen, in the Baltinglass Municipal District.

He feels west Wicklow has been the poor relation when it comes to getting resources and, if elected, he is determined to redress this imbalance and give an effective voice to the west.

“Planning permission for young people in their own area, and the provision of well planned social and affordable housing in the towns, will be particular priorities,” he explained to the Leinster Leader.

“Another priority will be the need for serious infrastructural investment in the rural economy and villages.  The tourist potential of the whole west Wicklow area needs to be developed in a way that hasn’t happened up to now.”