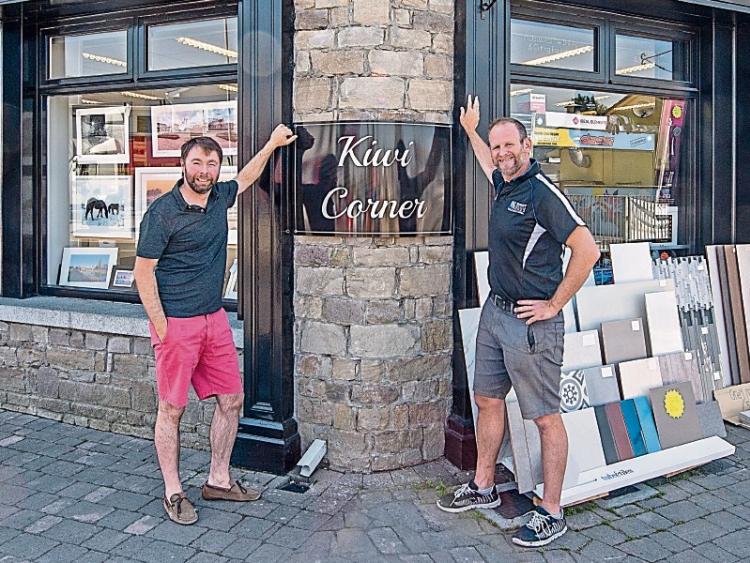 “I had gone across the road to the Spar, and I noticed a gallery had opened up in the shop beside me. There was a small, passport-sized picture in the window, of the man involved, and it said he was Michael Anderton, from New Zealand originally.

Sammy Darragh, from Matamata on New Zealand’s northern island, arrived in Ireland 18 years ago on a deal to play rugby in Monkstown.

He ended up moving to Barnhall rugby club in Leixlip where he played first team rugby for seven years.

At the same time, he was developing his Kiwi Plumbing business, and built his home for himself and his three kids near the Traveller’s Rest Pub, Ballyteague, 10 years ago.

In more recent times he established Kiwi Complete Bathrooms Ltd at Allenwood Cross, which is when, to his great surprise, he found himself next door to another man from his home country, photographer Michael Anderton.

So now the pair have renamed their little bit of Allenwood ‘Kiwi Corner’, complete with a sign.

From a balcony in his house, a beautifully restored old sheriff’s house dating back to the 1890’s, he says he can see much of Kildare and even as far as Offaly.

“I really loved the area. I loved being in the country,” he said.

“It has a lot in common with where I’m from, Matamata, which used to be a sleepy little town, but is now famous for where the Lord of the Rings films were shot.”

As well as the views, he loves canoeing along the canal with his kids and they even have a pony.

Having established himself as a plumber over a number of years, he established Kiwi Complete Bathrooms Ltd which provides bespoke designs.

“Business is good,” he said. And his aim is to create a sense of community in the shop — which is why he carries small general hardware. including items from the Wurth brand.

Mr Anderton, for his part told the Leinster Leader that moving to the West Kildare village inspired him to develop his photography hobby.

As a younger man he lived the charmed life of working on fruit farms (apples and avocados) for the summers while travelling for the winters until he arrived in Ireland and started to earn more driving a lorry than he did at home.

From Hawk’s Bay, on New Zealand’s north island — about 220kms from Sammy’s home town — he explained; “I sold my business in New Zealand and settled down here.”

As well as deciding to settle down, he also decided to buy a proper camera and to get more serious about his photography.

He has travelled the country extensively, taking shots wherever he went — and he says that shots of the Wicklow mountains, in particular Glendalough and the Blessington Lakes always sell well.

But it was when he and his partner bought a house in the Allenwood area that things really took off for him.

He was immediately inspired by what surrounded him, and following great success in a pop-up shop in Clane in the run up to Christmas, 14 months ago he set up his shop in the village.

Notwithstanding the relatively remote location of Allenwood, he says he’s had a steady stream of customers.

“They’re coming from all over — south Dublin, Wicklow and Carlow.”

His website mjanderton.com has proven successful in driving sales for him as well.