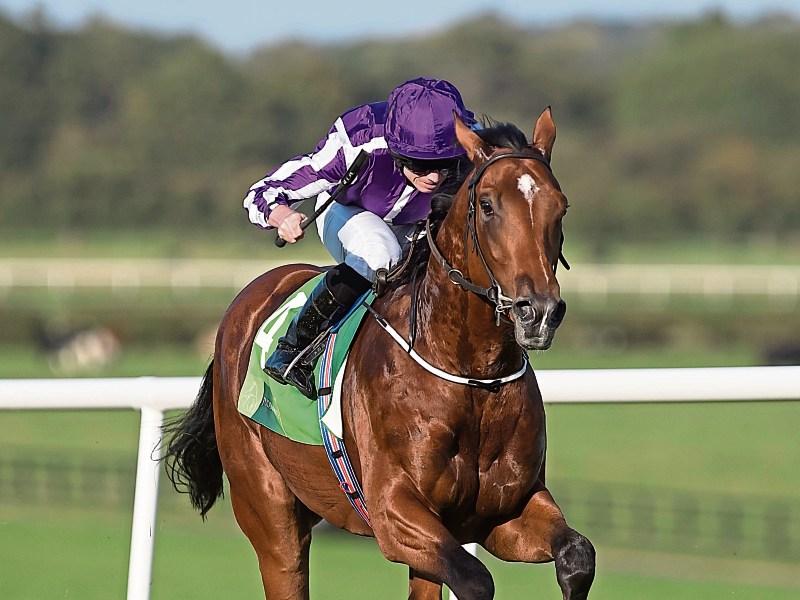 It will be the biggest field in the race since 2006, although the Kildare crowd will miss seeing Epsom Derby winner Masar. Trainer Charlie Appleby said recently that the intention was to run him in the Coral Eclipse Stakes at Sandown on July 7, instead of making the trip to Ireland.

Epsom Derby runner-up Dee Ex Bee could give trainer Mark Johnston his first success in the race and he is joined by strong British representation with Old Persian and Knight To Behold standing their ground at this morning’s declaration stage.

Following victory in the Group 2 King Edward VII Stakes at Royal Ascot last week Charlie Appleby supplemented Old Persian for the Irish Derby on Tuesday morning and William Buick will ride the son of Dubawi as the Newmarket-based trainer looks to complete the English and Irish Derby double for Godolphin.

Frankie Dettori has been booked to ride Knight To Behold for trainer Harry Dunlop who is aiming to emulate his father, John, who won the Irish Derby in 1978 with Shirley Heights and Salsabil in 1990.

Joseph O’Brien, successful in the race as a jockey aboard Cameot and Australia, will have his first runner as a trainer when legging his brother Donnacha up on Latrobe for the €1,500,000 contest.

Mick Halford will have just his second runner in the Irish Derby with Gallinule Stakes winner Platinum Warrior taking up his entry in the race.

Halford, who grew up just miles from the Curragh Racecourse, is looking forward to running the son of Galileo.

“The Dubai Duty Free Irish Derby is a wonderful race and we are all very excited to have a runner in it,” Halford said. “Platinum Warrior’s preparation has gone well and he is a straightforward horse so we’ve had no headaches on that front.

“His homework has been very good and we were pleased with him on the Curragh last Tuesday morning so we are looking forward to the race itself now. He seems to be a colt improving with racing.”

Dermot Weld relies on the unbeaten Bandua as he looks to win another Irish Derby.

“We’ve been fortunate to win the race three times and I would be more hopeful than confident, but I am very happy with Bandua and if there’s going to be an upset I hope it can be him” Weld said.

“It looks a good renewal of the race and it has been strengthened by the horses that have been supplemented.

“He has been so effective on a soft surface; whether he can adapt on a faster surface remains to be seen. The reason I am running him is he is working extremely well.

“He is American bred so you would expect him to handle faster ground but he bends his knee and that is why he was so effective on soft ground. That said, I still think he has a realistic chance of running a big race and if you are not in you can’t win.”

Tipperary-based trainer Fozzy Stack will also have his first runner in the race when impressive Curragh maiden winner Carlo Biraghi takes his chance and the Jim Bolger-trained Theobald completes the line up.

Friday’s first race is off at 5.25pm and the card features the Her.ie Apprentice Derby and the JOE.ie Handicap. At 7.45pm the Jarlath Fahey-trained Sea The Lion will be bidding for a hat-trick of wins this season when topping the weights in the Irish Stallion Farms EBF Ragusa Handicap of €50,000.