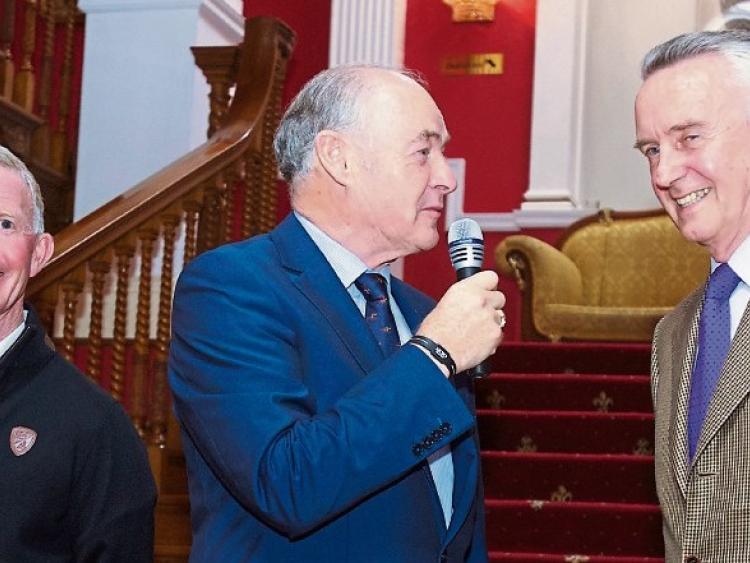 MC Dessie Scahill, chats to Jim Bolger and Mick Kinane at the launch of the Flat Season in 2017. Picture: Tony Keane

Come 5.15pm on Saturday week, Dessie Scahill will commentate of his last ever Dubai Duty Free Irish Derby. Between RTÉ Radio and on the racecourse itself, Dessie hasn’t missed a call on Ireland’s Premier Classic since 1971, the year Irish Ball collected the Curragh contest for France.

A lot of water has gone under the bridge since that summer’s day.

“I don’t remember much about the race but I commentated on the race for RTÉ Radio as Michael O’Hehir had moved to RTÉ television and Tony O’Hehir did the racecourse commentary on the track.

“The winner was a French horse who was trained by Philippe Lallie and ridden by Alfred Gibert. Back then, quite a few French horses won the Irish Derby and that was the first time I commentated on the race. It was by far the biggest race I had ever called at the time,” remembers Dessie about one of the earliest days in his glittering career.

From an early age, Dessie Scahill had the racing bug and his first hands-on experience of working in the industry came when Dermot Weld took him on as an apprentice jockey.

This was at a time when you would have to “wait until the next morning to find out the result of a race”.

He also had a spell with Mick O’Toole before taking up his main profession when going racing was a big part of his life.

“My first memory of the Irish Derby was the year Santa Claus won it in 1964. I was there that day and I remember it well as I knew his jockey Willie Burke, who lived across the road from me in digs.

“He took over from Scobie Breasley, who rode the horse at Epsom, and we were all rooting for him. He would only have 20 rides a year and maybe only rode one winner each season so it was a big deal back then. That wouldn’t happen today.

“We were all delighted for him and there were bonfires for weeks afterwards.”

Dessie’s first ever racecourse commentary came at Leopardstown racecourse in 1971, having ‘called’ so many Cheltenham Gold Cups, Derbies and Grand Nationals on social nights out as his ‘party trick’.

While different fellas were getting up to sing a song, Dessie would commentate on the previous day’s big race.

It took off from there and up until 1981, Shergar’s year, he was calling the Irish Derby for RTÉ Radio.

Then arose the opportunity to take over at the racecourse itself.

“When Tony (O’Hehir) went to the Racing Post full time, I became the number one racecourse commentator and I’ve commentated on the Irish Derby every year since.

“The day of the bomb scare (1987), when the crowd started to filter out from the stands, I thought there were 50,000 people there that day. You just couldn’t believe the amount of people who used to go to the Irish Derby back then.” 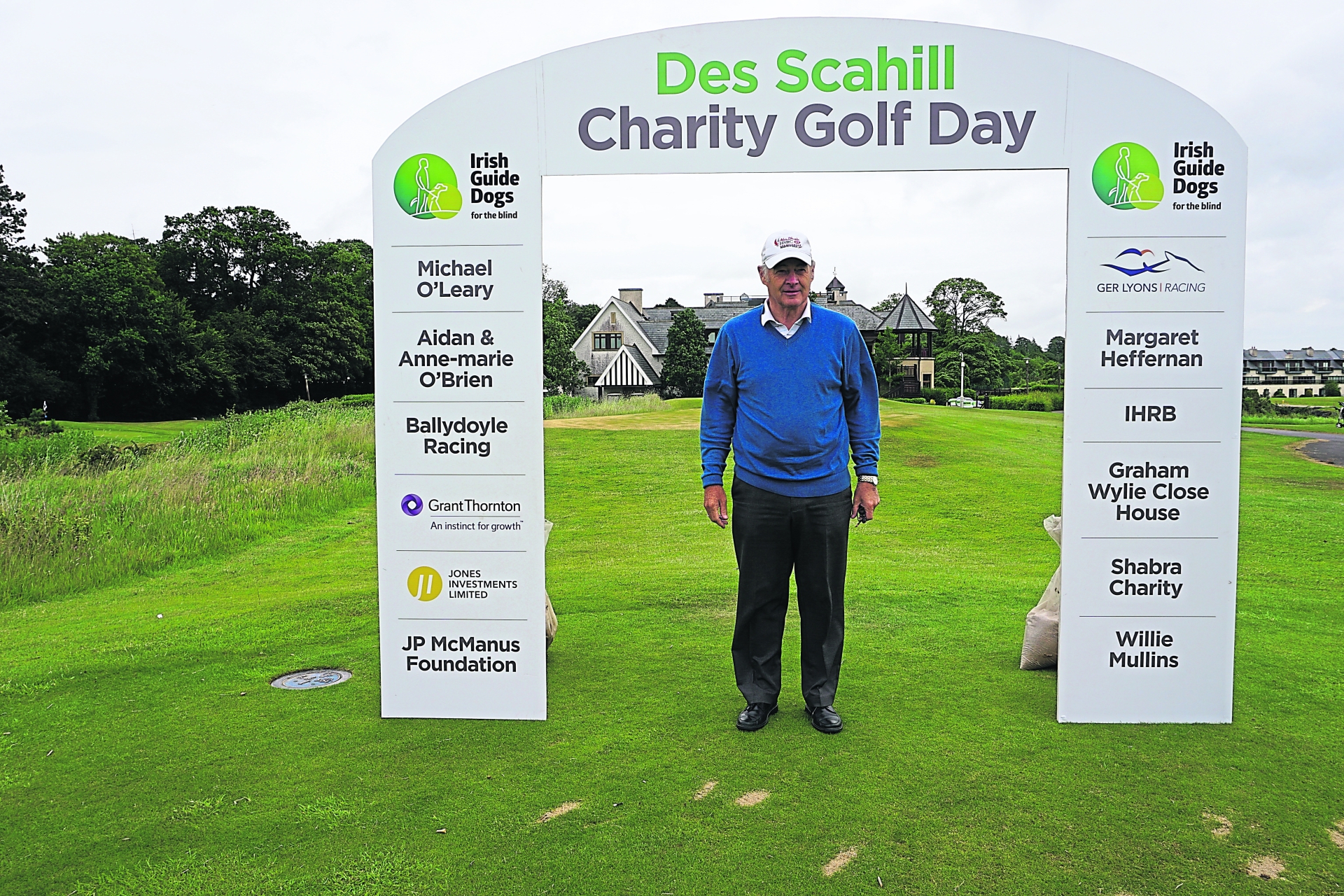 Dessie Scahill, whose charity golf day in aid of the Irish Guide Dogs was held recently at the K Club

Of the 47 Dubai Duty Free Irish Derbies in which Scahill has donned the mic, there are a few which stand out more than most.

“The year St Jovite won the Irish Derby, in 1992, definitely stands out. That race was amazing.

“He went off so fast that you thought when he gets to the straight, this fella is just going to start walking. He can’t keep this up, you were thinking.

“Yet, when he got into the straight, he just went further away. It was no surprise when people started saying that it was a course record because you could easily believe it.

“I was remember calling that race and thinking to myself that I was nearly not believing what I was seeing. It was sensational.

“That has to be one of the greatest Irish Derby wins that I’ve ever witnessed or commentated on,” explains Dessie about that scorching day 26 years ago.

On Saturday week, Aidan O’Brien will bid for an unprecedented 13th Irish Derby triumph. Dessie still remembers the day he captured his first.

“For Aidan, he was already starting to make a name for himself but you wouldn’t have been thinking that he would turn out the trainer he has become today. Back then, he was a name that was building and for him to win the Irish Derby, that was huge.”

Four years later, Aidan trained his second Irish Derby winner and that’s a day which stands out in Scahill’s mind too,

“I remember the year Galileo won it (2001) because Mick Kinane couldn’t ride an Irish Derby winner. Galileo came along and at that time, he was a very good racehorse. That year, it was another Irish Derby for Aidan but it was Mick Kinane’s first. Not long after that year, Aidan won seven Irish Derby winners in a row, but what many won’t know is that from 2000 to 2014, the winners were all ridden by Irish jockeys, which was a big twist from the norm.

“Something else which doesn’t happen these days is that the English and French Derby winners don’t clash at the Curragh like they used to do. Back in the day, especially when I started commentating, it nearly always happened. Even back then, the first four from Epsom nearly always came over to the Curragh and the form would nearly always be turned around. That was the case when Sodium won the Irish Derby (1966) and St Jovite too (1992).

“Maybe Aidan’s domination in the race has taken a bit of the gloss off the Irish Derby. It’s less competitive now because Aidan probably scares off a lot of horses, especially the French.”

Not only is Dessie a fan of Ireland’s most famous Classic but he’s a huge admirer of the Curragh as a racecourse too.

From a racing perspective and the commentary side of things, it ticks all the boxes, according to Scahill.

“The best horse always wins the Irish Derby at the Curragh. There are never any excuses unless there’s a pilot error. As a race to commentate on, it’s probably one of the easier races to call.

“Over 1m4f, there would generally have been only three or four horses in the last couple of furlongs with chances. The majority of the Irish Derbies I’ve commentated on haven’t thrown up many photo finishes.

“In terms of worrying about it beforehand, it was never a big issue. The Curragh was always one of my favourite tracks to commentate at for two reasons. The best horse always wins and it was just up the road.”

Outside the Curragh, Dessie has commentated at some of the world’s best tracks and has contrasting memories to go with them.

“I commentated at Epsom for three English Derbies and it was horrendous. If someone gave you a JCB to flatten a racecourse, you’d pick Epsom.

“I’m most associated with Dawn Run’s Gold Cup win and that’s one I’m proud of. The good horses bring out the best in you and I have fond memories of the days I commentated on Hurricane Fly, Istabraq and Moscow Flyer.

“Of all the races I’ve commentated on, I got great pleasure in calling a few different Irish Champion Stakes at Leopardstown. The year Fantastic Light beat Galileo was a really exciting race and when Sea The Stars won, that was one I got great satisfaction out of, mostly because he was a marvellous racehorse. That was probably my favourite race to call.”

Dessie has no doubt in signalling out Nijinsky as the greatest horse he has ever seen. So it’s perhaps ironic that 12 months after Vincent O’Brien’s superstar galloped to his Curragh crown in 1970, Dessie’s Irish Derby journey began.

All good things in life always see their end and in the coming weeks, after 47 years at the helm, the number one voice of Irish racing will hang up his binoculars for one final time.

So enjoy him while he’s around.