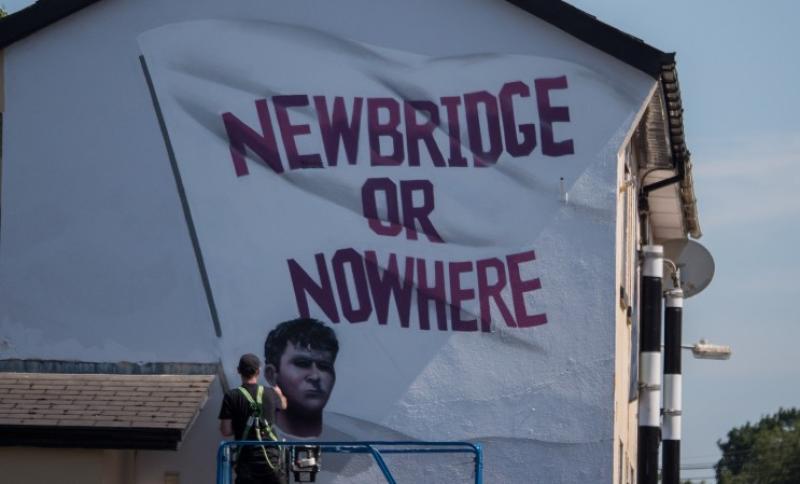 The 'Newbridge or Nowhere' mural being painted outside St Conleth's Park in Newbridge this afternoon. Picture: Tony Keane

Kildare booted Mayo out of this year's All Ireland championship with a thrilling win at Fortress St Conleth's Park this evening.

The Lilywhites have had the backing of their supporters and fans on social media all week as the #NewbridgeOrNowhere campaign gained ground - and the Twitterati didn't disappoint tonight.

Here's a roundup of some of the best:

Great result for the people of Kildare after the board, players and management showed courage all week.

Imagine trying to take this away from GAA, Saturday summer nights in the provinces, home advantage. What a game, people are crying, Kildare delivered tonight. Mayo, one of the most admirable teams ever, went out on their sword. Kildare had energy off the bench a d composure 21-19 pic.twitter.com/T4sdgMdhmm

One of the games of the year.
Take a bow Kildare.
Cian O'Neill the new King of Kildare

It’s a kip but it’s our fucking kip!!! #NewbridgeOrNowhere

Cian O’Neill to get the extra seat in Kildare South constituency. https://t.co/jwfnIvc6OF

A Kildare win and a selfie with @MartyM_RTE What more could ye want on a sunny Saturday! A Clare win tomorrow and we're gold! #NewbridgeOrNowhere #CillDaraAbu #HontheLillies pic.twitter.com/7K16QfCN79

A win for the people today #NewbridgeOrNowhere

As children (& adults) lined up to have their photos taken with @KildareGAA players on the pitch in St. Conleths after the final whistle, it just proved that there is no where else this match should have been played. #CillDaraAbu #GAAQualifiers @TheSundayGame #NewbridgeOrNowhere pic.twitter.com/AyOmthvXaD

Left my mother's anniversary mass to find that Kildare won in Newbridge. She'd be happy. G'wan the Lillies! #NewbridgeOrNowhere

The game is over almost an hour and they still haven’t wiped the scoreboard. It’s almost as if they still can’t quite believe it pic.twitter.com/9SXEHieakp