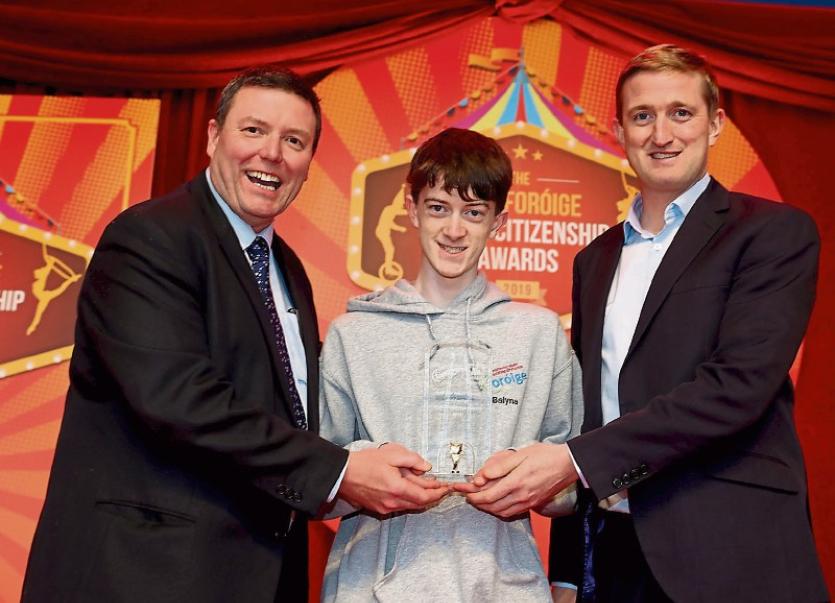 After the demolition of an old historical house in their community, the young people in Balyna became concerned about protecting other local landmarks for the future. They arranged a visit of the Historical Society to their club meeting to learn about the village’s hidden history and decided that the unique stones in the Primary School, that go unnoticed daily, deserved some recognition. They cooperated with other local groups to fund raise, install and have an unveiling event for a plaque at the school. They also decorated storyboards about local history to display in the school. The unveiling event was covered by local media,it was a great success that brought over 120 people from the community together.

‘The Positivity Pages’, from Carrick an Suir, Tipperary was named the overall national winner at the Aldi Foróige Youth Citizenship Awards. Their Citizenship Project, which started a monthly youth newspaper to spread positivity and awareness about minding your mental health was chosen from over 220 social action projects developed by young people to change their communities for the better.

This year is the fiftieth anniversary of the Youth Citizenship Programme, which was first run by Foróige in 1969. 2019 has been the biggest year for the programme ever, with over 14,000 young people taking part.

Other Kildare winners included  Celbridge Youth Café, for A fundraising project for their Youth Café; Narraghmore Foróige Juniors, for An animal welfare awareness project and Making homes for birds to raise money for homeless people;  Rathangan After School Group, DPEI,  for An anti smoking video and Time to Sign Foróige Style, for Sign language summer camps for young people.

SEE ALSO: Nurney estate will not be taken in charge this year