The details of the racing yards taking part in this year's Curragh Thoroughbred Trails have just been announced.

As part of the Longines Champions Weekend raceday at the Curragh Racecourse on Sunday, September 16, punters will get the chance to look behind the scenes at the establishments of several of the county's top racing trainers, stud farms, RACE and the Irish National Stud.

A trail tour costs €20 (or €45 with combined raceday ticket), with buses leaving from the Curragh Racecourse at 9.30am on the morning in question.

Each trail will be accompanied by an expert guide, including former jockeys Warren O’Connor and Gordon Power and former trainers Sandra Hughes and Jim Kavanagh, in addition to Sally Carroll and David Murphy.   Participants will enjoy complimentary breakfast at the Curragh, sponsored by Horse Racing Ireland Ownership.

Derek McGrath, CEO of the Curragh Racecourse, commented: “The Thoroughbred Trail is a fantastic opportunity for visitors to see behind the scenes of the Curragh and to experience areas not normally accessed by the public. We are hugely grateful to the support of the trainers, studs and other facilities who are opening their doors as the Thoroughbred Trail is an integral part of Longines Irish Champions Weekend.”

Book admission to the races and trail online at www.irishchampionsweekend.ie. 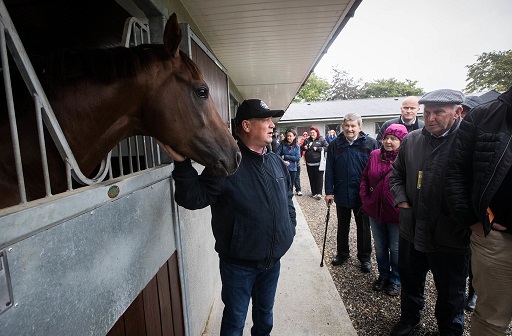