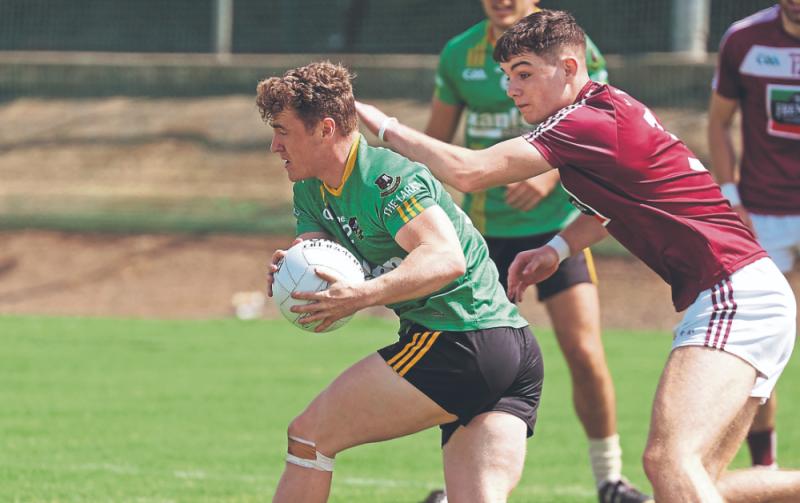 Ballyteague defeated St Kevin’s in their Intermediate Football Championship first round fixture. To call this the Jimmy Hyland show would be disrespectful to the guts and grit Balltegaue showed collectively to get themselves over the line after a first half in which looked second best, despite being level at the break.

But no doubt Hyland spearheaded this victory registering 0-10 in the game and representing everything that was good about his team through his hardwork and determination, qualities that were present all over the pitch for the eventual winners.

St Kevins got this game off to a perfect start and rattled off three scores in double quick time to lead to three points to no score in as many minutes. But it was Ballyteague turning at a triple as they matched their opponents hot streak in reply with three scores of their own.

The sides traded points for most of this half but the key difference in performance was Kevins’ goal chances. The first of which came after 10 minutes when Conor Murray, fresh off a goal the weekend prior, blasted his effort wide from a prime position.

Moments later they were in again but at much greater range this time as midfielder Ciaran Smyth launched a brilliant effort goalwards which produced a save to match from Ballyteague keeper Derrick Mooney.

On the 20 minute mark we got an insight into perhaps the hardest job in Kildare Intermediate football, marking Jimmy Hyland. That honour was bestowed upon Paddy Tyrell on the day and his monumental task was typified as Hyland faced his man up just outside the 21-metre line, faking to shoot with left, then his right, before converting with his weaker left foot.

The team closed out the half level at 0-9 each but it was St Kevins who looked the more dangerous when hunting for goals at various points in the half. You wondered at the break would it be them with the momentum who kicked on to win this game or would they rue those crucial chances missed.

It would be the latter as Ballyteague looked sharper after the restart and got the better of the early second half sparring. Hyland’s scoring in this spell was added to by excellent scores from Fionn Murphy and Cathal Hanafin, with Murphy looking particularly sharp on the ball throughout this game.

From that point forward Ballyteague kept their side of the scoreboard ticking over and Kevins simply did not. The gaps that were exploited in the opening half were no longer there and as the trailing side Kevins’ struggled to create any meaningful second half chances.

There was little in the way of goal threat for the eventual winners also but there was also little necessity or desperation for it either as they took hold of the second half. A great start for Ballyteague in a tough losers group, with Ballymore Eustace and Kilcullen.

Clane edge past Raheens in an instant classic SFC opener