Clane edge past Raheens in an instant classic SFC opener 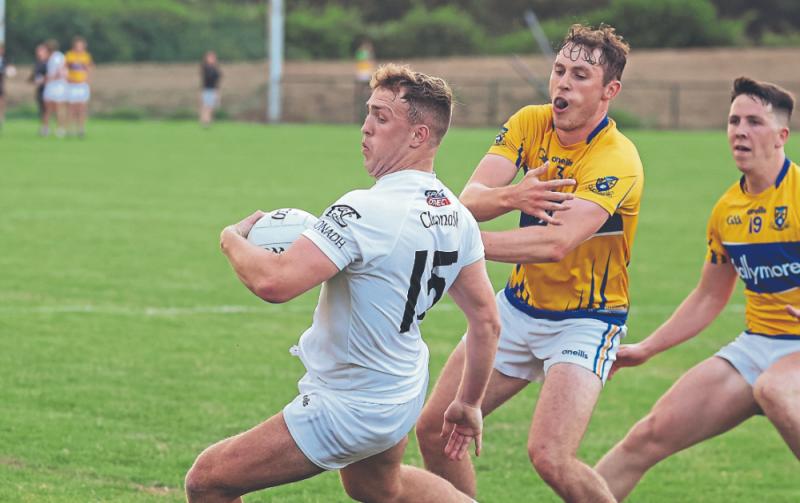 Clane came back to beat Raheens in an instant classic in the first round of the Senior Football Championships group stage. The winning score came exactly on 60 minutes as Shane O’Sullivan took a free-kick and made poor contact on the ball, skewing it high, but as it came back from the heavens it fell between the posts and that is all that will matter for the Clane corner forward and his team.

The winning scored just as we entered additional time but it was by far the last action of this contest as Raheens twice won the ball high up the pitch. The second time the ball found its way to Paddy Woodgate but the forward, just back in the team from injury, lost possession and Clane closed the game out from there.

Clane had a plan in place for Woodgate as corner-back Harry O’Neill was tasked with man-marking the Kildare squad member. O’Neill reduced the forward to no-score from play in the entire game and was excellent on the night. Keeping a key player quiet and winning hugely key turnovers for his side.

One man Clane couldn't keep quiet was Rob Thompson who continued his rich vein of form, scoring 1-4 on the night. Thompson’s goal came as Mikey McGovern hand-passed the ball across the goal for the forward to slap home, excellent play from both men.

The first Raheens green flag night came after just six minutes as Liam Power drove through the Clane backline and finished calmly past Cian Burke in the Clane goal.

Raheens coped excellently with those dangerous Clane forwards in the first half and appeared to have filled the gaps that were evident in the St Laurence’s game.

Raheens defensive solidity which came from simply increasing the numbers of players behind the ball frustrated Clane in the opening half. Clane regularly opted for speculative and wasteful shots as they struggled to break their opposition down. Raheens led 2-7 to 0-8 at the break and appeared to be in control.

Raheens kept early possession of the ball as the second half got under way attempting to take the sting out of whatever energising words were passed onto their opponents at the interval. Rob Thompson popped over a score at the end of it and all appeared to be well as their lead stretched to six points.

But from the second ball of the kickout Clane’s Tadhg Montgomery collected possession and set off on the most incredible of solo runs, slaloming and powering past every man in yellow and blue. The half forward finished past Declan Campbell for a huge goal and if that wouldn't lift a team, nothing would. An incredible piece of play from a man who died with his boots in the game.

From there Clane turned up the pressure even more and clawed their way back to level and even into the lead as the sides continued to trade scores. A Rob Thompson free brought the sides level with two minutes to go but it would be heartbreak for Raheens when Shane O’Sullivan converted that crucial free kick.

Subs: Cormac Vizzard on for Eoin Walsh (Half time), Oisin Tighe on for Jake Devey (51 minutes), Cathal O'Brien on for Tadhg Montgomery (57 minutes).