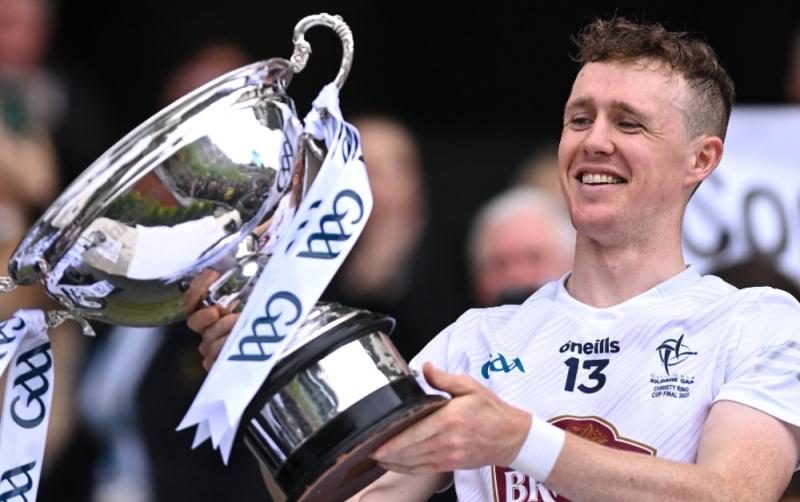 It was easy, comfortable and thoroughly deserved as Kildare notched up their fourth Christy Ring Cup success with a thoroughly desrved sixteen point win over a Mayo side, who in fairness never lied down, but were well and truely out-classed in a game that was all but done and dusted by half-time.

And while Mayo put in a spirited second half display there was never any danger of a shock result as the roaring hot favourites completed the job in a fashion that one had expected before the game.

On top of that there were some really excellent top class displays from Kildare players; none more so than Gerry Keegan who was absolutely outstanding as his ten points from open play testifies to.

James Burke was not far behind him, his tally of eleven white flags that included seven frees, one 65 and three from open play as the big man probably put in the best performance he has ever given in a white shirt.

The half back line of Kevin Whelan, Rian Boran and Conan Boran were soundness personified while Cathal McCabe and team captain Brian Byrne all had top class games, in fairness not one player in a white shirt, including the lads that came off the bench, played below what was expected of them.

Mayo had a fine player in Shane Boland, the Tuairín captain won't want to see Kildare or Naas players for a long while as he suffered two big defeats at the hands of these during the 2021/ 2022 season but his tally of ten points was indeed a top class display from a talented player.

Having said that while Gerry Keegan and Shane Boland exchanged opening points, James Burke and Eoin Delaney had them level at 0-2 apiece on six minutes before Kildare slowly but surely began to turn the screw.

Gerry Keegan and a great Cathal McCabe point opened a two point lead before The Lilies raised the first green flag and it was their captain and leader, Brian Byrne who gave his side the lift on nine minutes.

Mayo keeper, Bobby Douglas denied two Kildare players with brilliant stops before Brian Byrne got his hands on the sliother, turned and fired high to the top hand corner of the Mayo net and Kildare were on their way.

Mayo insisted on hitting puck-outs down the right wing despite Conan Boran and Cathal Derivan clearing up on most occasions.
James Burke (free) and a brilliant individual effort from one of the stars of the season for Kildare, Cathal McCabe, stretched the lead out to seven on 13 minutes.

Shane Boland kept his side reasonably in touch with two points (1 free) before Gerry Keegan was unlucky to see his blistering shot come off the upright (and a free white shirt inside all alone); James Burke added a free and with Shane Ryan and Gerry Keegan raising white flags Kildare led 1-9 to 0-4, 20 minutes on the clock.

Despite Shane Boland converting a free soon after it was obvious Kildare were in total control; better movement; better striking and that ability to make space and find a man was there to be seen time and time again.

One of the features of the game was the free taking of James Burke, the Naas man hit a couple of monstrous frees, some from close to his own 45m line in a brilliant display and four points from the same man saw the lead out to 1-12 to 0-5, 26 minutes on the clock.

Conan Boran hit an inch perfect cross field pass to his captain Brian Byrne who did the rest and after Gerry Keegan landed another, Cathal Dowling gained possession out wide, cut in along the end line, left his marker for dead before batting the ball past Bobby Douglas for a great goal as The Lilies were now leading 2-14 to 0-6 31 minutes gone.

Shane Boland added two points for Mayo before the break but Kildare added three in between, two from Burke and one from Keegan as Kildare led at the break 2-17 to 0-8.

The game was as good as over at that stage, the second half was a bit of a non-event to be perfectly honest and while full credit must go to Mayo who, knowing full well they were fighting a losing battle, they certainly did not lie down.
Kildare did not play as well in the second half but tacking on six points to Mayo's two in the opening 15 minutes of the second half, certainly ensured there would be no dramatic comeback form the boys in green and red.

Over the next 15 minutes or so Mayo actually outscored Kildare seven points to four with scores from Kenneth Feeney, who came on before half time and did well; Shane Boland added two while Keith Higgins, who had a quiet game throughout, did fire over an impressive point after a great sole run while full forward Joseph McManus operating from further out the field also landed two points.

Gerry Keegan added three to his total, Brian Byrne one and a monster free from the stick of James Burke as Kildare led 2-27 to 0-17 with five minutes to go as we edged towards the inevitable conclusion.

The last four points of the game were shared equally with Gerry Keegan getting his tenth, substitute Paul Dolan adding his name to the score sheet while Kenneth Feeney added two for Mayo as the final whistle arrived with Kildare winning handsomely on a final score line of Kildare 2-29 Mayo 0-19.

This one was won in the opening half, once Kildare got into their stride Mayo had no answer for them.
A great win for The Lilies and as manager David Herity said after the game “a great and exciting time for Kildare hurling.”