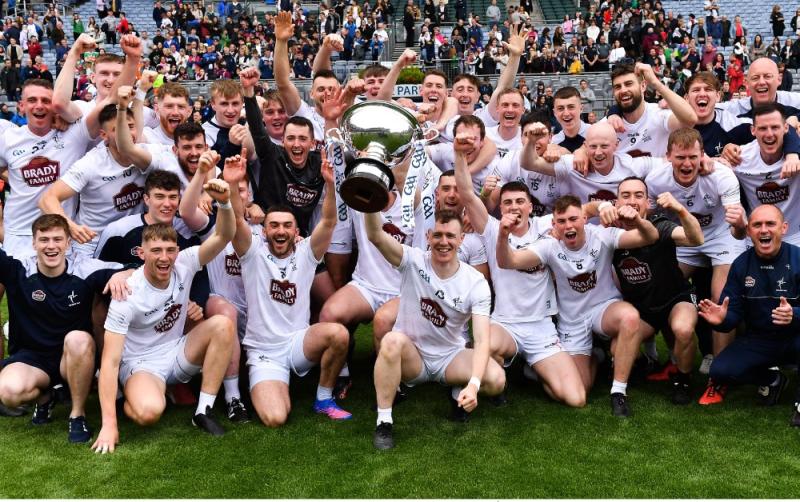 Kildare captain Brian Byrne lifts the cup during the celebrations after his side's victory in the Christy Ring Cup Final match between Kildare and Mayo at Croke Park, Photo by Piaras Ó Mídheach

When manager David Herity spoke after Saturday's game one could sense not just the delight but the relief the former Kilkenny star as he spoke of glowing terms as to where Kildare hurling is today.

“The Christy Ring was the no 1 objective, obviously retaining 2A was vital as the last thing you wanted to be was a yo-yo team going up and down divisions, but now Kildare are facing into 2023 in Division 2A and up in Joe McDonagh, extremely challenging but fierce exciting to have teams in both of these.

“It was a significant victory here today, we had to, for the development of hurling within Kildare, we had to get that victory and go back up.”

The manager admitted that there were some early nerves “we figured that might happen” but added “once Brian (Byrne) got that opening goal it seemed to settle down the whole team and I felt we left a few goals behind us, especially in the second half which is disappointing but you can't really complain after winning.”

Captain Brian Byrne, who lifted the Christy Ring Cup for the third time, said “any time you win silverware in Croke Park is a good day; this one meant a little bit more; we really wanted to get back up to the Joe McDonagh Cup, and if that did not happen this year it was all down to us (players) our fault but we achieved it and very happy.”

It has been a momentous 12 months for hurling in Kildare and in particular for Brian Byrne who also led his club to SHC success, Leinster Club success, All-Ireland success and now the Christy Ring and the team captain added “we will go back to our clubs now for the summer and then regroup in the November or December and go again.”

David Herity insisted that although Kildare were installed as roaring hot favourites to win the Christy Ring “there was never a minute of complacency the whole year, nor when it came to the Christy Ring; we have played a lot of those teams in the past and they have beaten us, so we were never taking anything for granted.”

Herity went out of his way as regards to his management team. “They have been outstanding, they deserved incredible credit, each and everyone and I also think the Co. Board deserve huge credit; some times when you are relegated it is very easy to make cut backs, but we actually added four new faces, changed our team by seven, so the Co. Board deserve huge credit for supporting us all the way.”