Caroline Ryan: a lady in a hurry 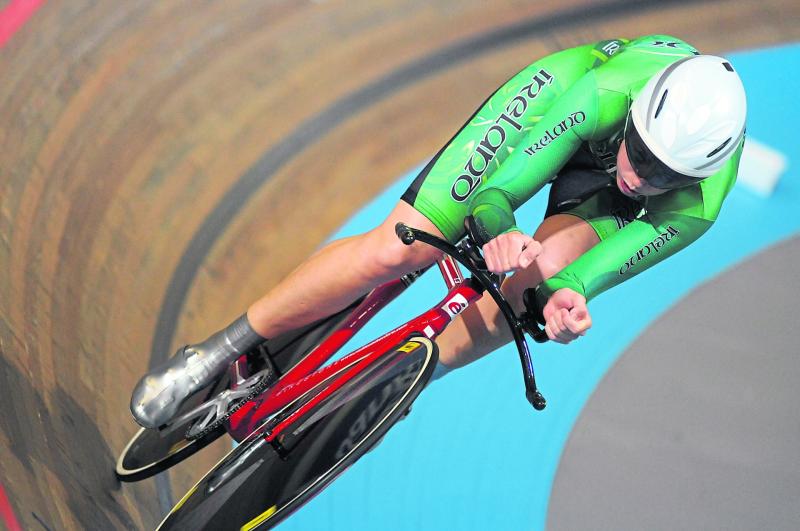 Caroline Ryan in action on the track

When Caroline Ryan wheeled her Cervélo bike up to the start line of the Points Race in Melbourne on Thursday, April 5, if she looked around her at her fellow competitors (including current world champion Giorgia Bronzini), she might have felt a little different.

For one, she was the only one who had paid her own way.

Secondly, she only started cycling four years ago after 10 years at the upper echelons of another sport entirely.

Many, if not most of those on the starting line with her would have been cossetted in their national programmes since they were teenagers, support systems that gave them a decent wage and paid their costs.

She had none of those things. She’s on a very small Sports Council grant, and scrapes by with help from some sponsors, friends and family.

Four years ago, when she was 28, Ryan first saw the high banking at the turns in the wooden track in the velodrome and it scared her. It took a while to get the hang of it, and also to get the hang of racing in a crowd of fellow riders, to get the hang of sitting directly behind another rider, your front wheel milimetres from their back wheel, travelling at 50kmh (30mph).

So where had she been until then, this johnny come lately?

Well, she’s been rowing, a lot. Her dad, Willie Ryan, and his brother Ted were rowers and represented Ireland in the 1976 and 1980 Olympic games.

She got into it in her late teens. Her father felt it necessary to warn her it would involve a lot of work, such was her lack of interest in sports as a child. “I brought her down to athletics in Johnstownbridge,” Willie says.

“Nothing, didn’t bite at all.”

I often ask him why he didn’t push me more when I was younger, she says. Maybe it was for the best. She says now that she had a chance to see a bit of life before getting heavily into sport so that she’d know what she was missing before she gave it up.

Willie says with some pride, that when she took up rowing: “She didn’t miss a training session.”

She excelled and was selected to represent Ireland in the World Rowing Championships at Eton, England in 2006 where she narrowly missed a spot for the Beijing Olympics.

She won five national championships and in 2008 became the first Irish woman to win the Henley Royal Regatta when she won the Princess Royal Challenge Cup. 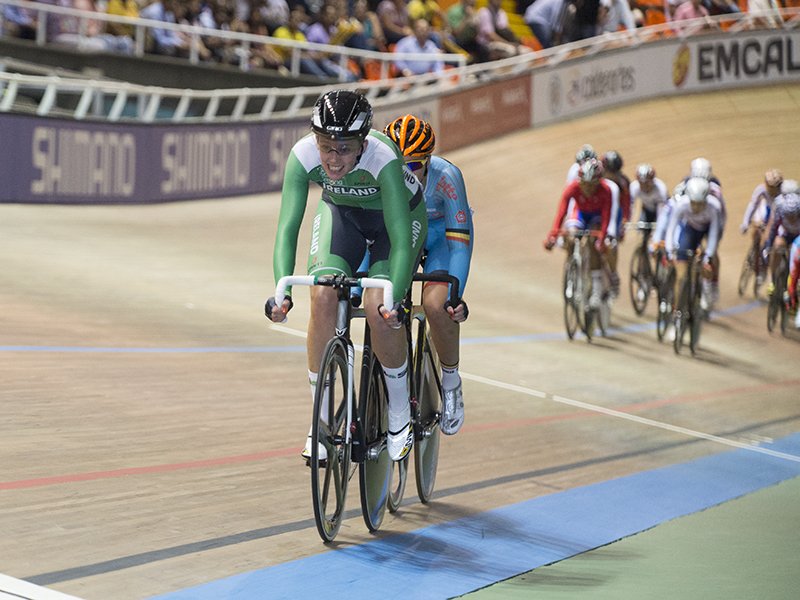 In action on the track for Ireland

In 2008 a new initiative called the Cycling Ireland Talent Transfer and Identification Programme created a buzz in sporting circles. Lady luck smiled on Caroline when a friend of hers had to pull out of a trial and asked her to go in her place. She did well, and her father, who had coached her in rowing had an inkling of what might be and told her: “There’s another 10% in you yet.”

She showed promise in tests and was selected as a pilot on the Irish Para-Cycling Tandem team where she and partially sighted Catherine Walsh won a silver medal and set a new Irish record at the World Cup in Manchester in May 2009. Another silver at the World Paracycling Championships in November 2009 soon followed.

But then rowing was still her first love, and while she loved track cycling, she saw it as good cross training for her rowing.

Physical testing plays a huge role in track cycling. Many cyclists hate it. Imagine sitting on a stationary bike in a lab, hooked up to wires and monitors, pedalling for forever as the resistance is constantly increased until you’re exhausted and can’t maintain your pedalling anymore. 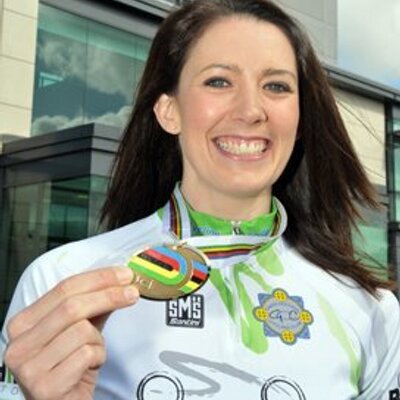 With the famous medal - Ireland's first track medal in over 100 years.

And throughout all this lung busting, sweat-drenched effort, somebody in surgical gloves is squeezing drops of blood out of your ear lobe every few minutes. Highlighting the difference between top athletes and the rest of us, Ryan says she likes it.

“I like it while the numbers continue to go up!”

Those numbers prompted her coach Brian Nugent to sit her down and tell her: “You have something here. You can do something on the track. You can medal, or higher at the Worlds.”

But that she’d have to go at it full time.

Hmmmm. Who’s going to pay the mortgage, or pay for three bikes that could be as much as €5,000 each, or €3,500 power meters or €1,700 training camps or to travel to Switzerland for training, or to Columbia, Kazakstan and Melbourne for com-petitions?

Read more: Kildare cyclists excel on the world stage in 2017

“It can done alright,” she says brightly. She says everything brightly. She is incurably optimistic, personable, likeable and utterly unaffected by the fact that she’s one of the 10 best female cyclists in the world - and Ireland’s most successful track cyclist in over 100 years.

Even though she’s the one doing all the pedalling, she sees it as a triumph for her coaches as much as herself. It’s never “I”. It’s always “we”.

Former US Olympic coach Andy Sparks echoes this: “Caroline works hard and it could not happen to a nicer person. She actually had people from about 10 different countries cheering her on (during the race) it was really cool to see how happy it made these other teams to see her do well.”

She says that the British team were cheering her on and were delighted for her after her win. With a budget of £22 million, you can be sure none of them are searching Ebay for bike parts.

“My father was worried when I said I’d take a career break from the Gardai,” she admits.

“We have no track here in Ireland so training is done abroad in Majorca, Newport in Wales or in Switzerland."

The points race where she won her medal wasn’t even her main goal. “We were mad racing it. It was only going to be an opener, to get some racing into the legs instead of sitting around. I was in really good form, the fittest I’ve ever been.”

Her main event is the individual pursuit where you face off against another competitor for 3kms or 12 laps, which she can do sub 3.35. That’s holding 50.27 kmh or 31.23 mph for more than three and a half minutes. 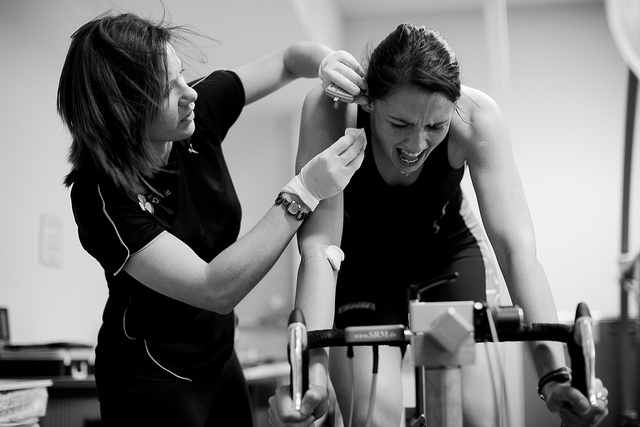 The dreaded ramp test, where blood is taken regularly in the course of an effort to see how much oxygen it is carrying.

“There’s not that many girls doing that,” she notes, adding that she’s improving all the time, a good sign for the future. She came ninth in that in Melbourne and knocked 10 seconds of her own and the Irish record.

“To look at the pursuit, it looks like you’re not working that hard, but there’s massive work. You’ve got to pace yourself around the laps. The last four laps of that are really hard.” As well as all that, she’s picked up six Irish records along the way.

As well as the power, Caroline was born with a love for hard work, or as they say in cycling, “a love of suffering”.

And she loves training camps. “There’s no distractions. You get up, have a bowl of porridge and then out of a ride on the road for two or three hours. Then back to download all the information from the power meter and send it off to Brian.

“Then grab some lunch, get a half an hour snooze, and get back to the track in the evening.”

The power meter, which she paid for herself, (€3,500) measures the power she puts through the pedals in watts.

Nugent can analyse her power output, and when matched up against her heartrate (which it also measures) can tell how much it’s taking out of her. 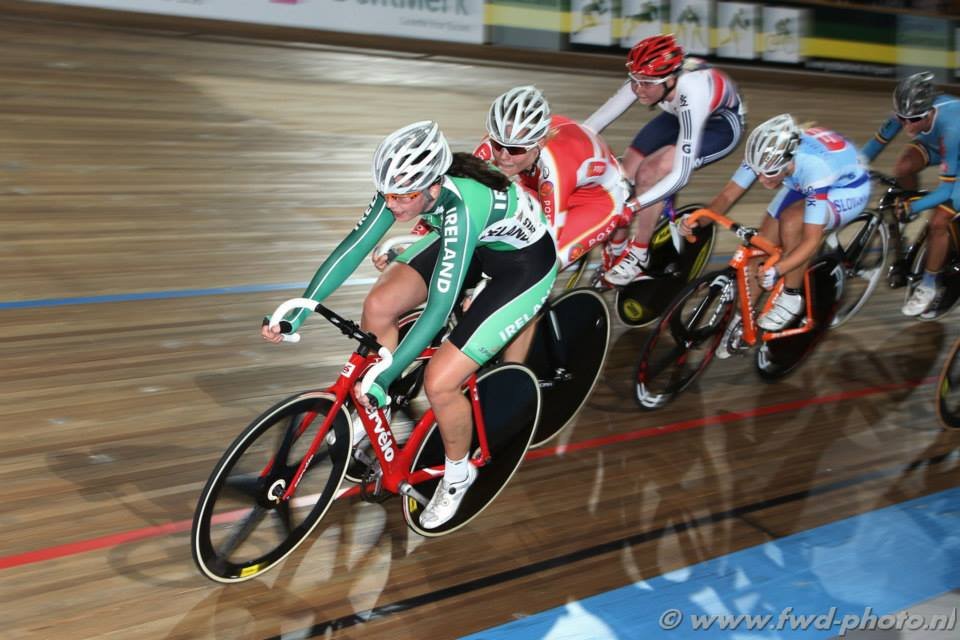 At the head of the pack

When she’s in Ireland, the roads of Kildare are her training grounds, and she can end up anywhere from Blessington to Edenderry. But she also loves going out with her local Leixlip club because she doesn’t have to think about the route.

“They pick a route and change it if the wind changes!”

Food is “pasta, chicken, lots of rice, fish is great and a bowl of porridge in the morning – and coffee. "I really should wean myself off the coffee!” Rest is another important element. “I realised that this year. Rest is as important as the hard work," she says.

Ryan’s next goal is the Olympics. She’s missed out on qualifying for the track, but the road race is still a possibility. In two upcoming races, in Canada and Belfast, in the next six weeks, she must finish in the top 5 to score 30 points. She knows there’s a lot of hard work ahead of her, but thinks it’s very achievable. In the meantime she races with the men to get her speed up.

“Do you beat some of them?” the Leinster Leader asked.

“Ah stop it!” she laughs. “You need that speed. The women’s races just aren’t long enough, fast enough or hard enough. Better off to be hanging in there with the men to get that speed up.”

It’s all a struggle trying to fund herself, but she refuses to get down, or dwell on it. “You’d get very annoyed thinking about all that. It’s worth it. We’re getting there.”

It’s the ‘getting there’ that she likes. After the world championships there was lots of official and media stuff to do. Speaking to her the following Saturday, she was generous with her time, but clearly she was itching to get back to training.

“On Monday it’s back to business with a bang. I’ve a job to do. I just need to focus.” 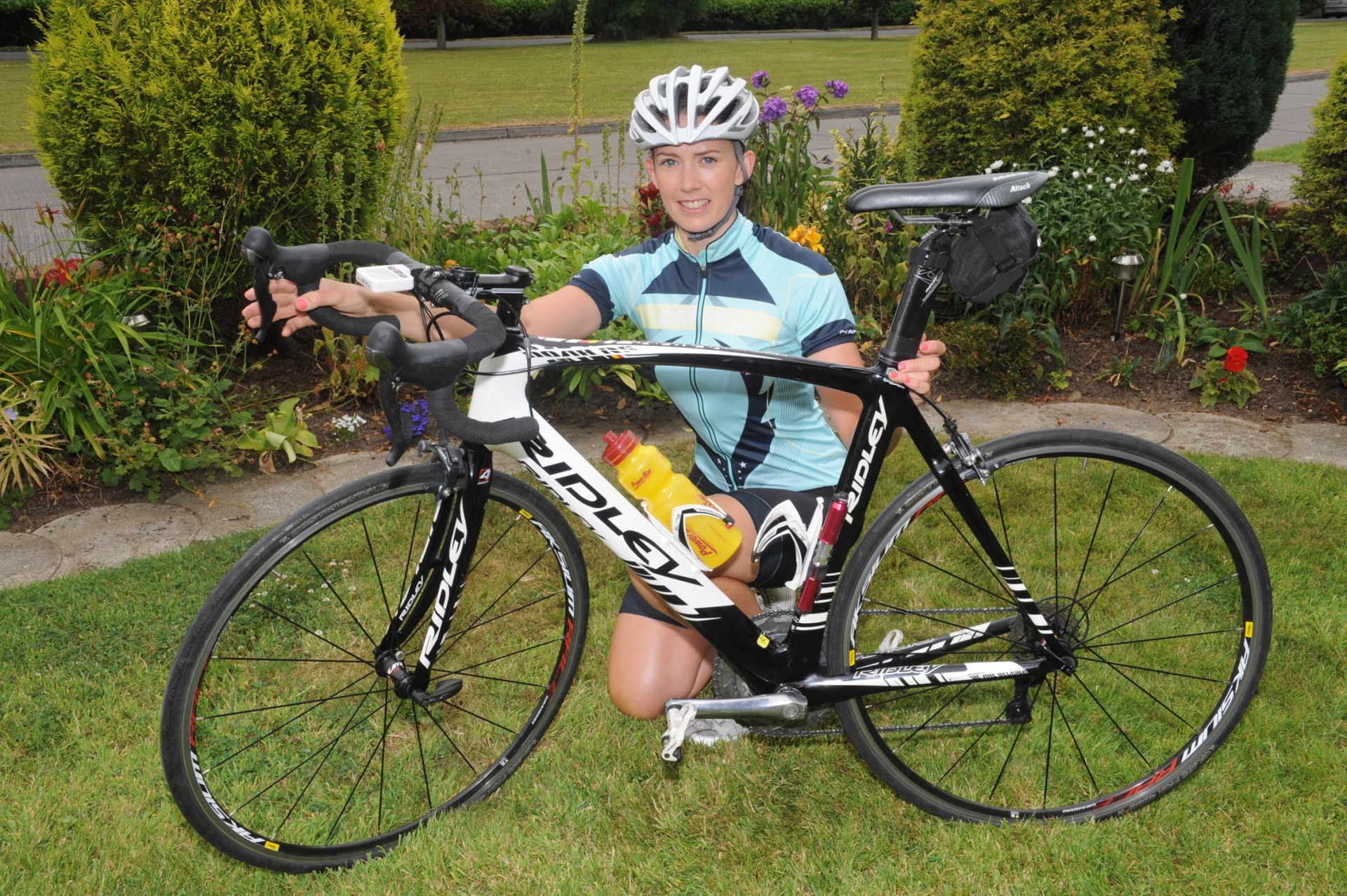