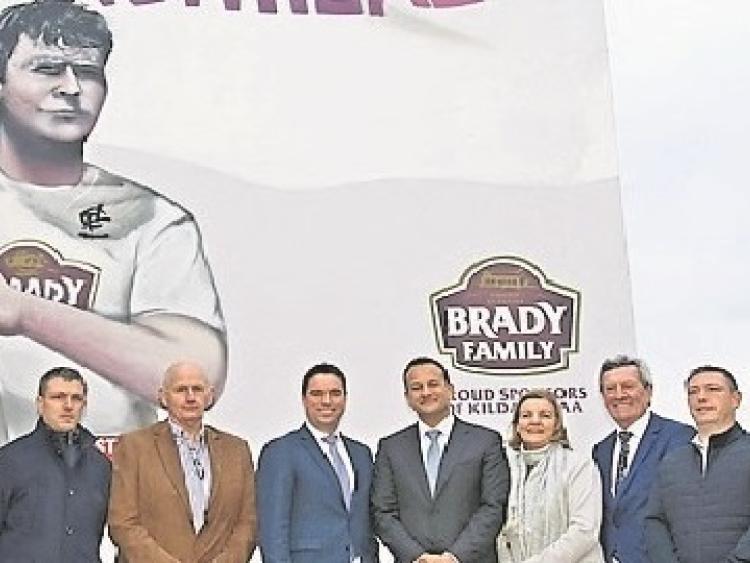 Taoiseach, Leo Varadkar and his entourage, with Co. Board officials when they visited St Conleth's Park last week

The words of a Sean McBride song of long standing, with no Kildare connections I hasten to add, sprang to mind last week when we were honoured by a visit of Leo The Lad (aka Taoiseach Leo Varadkar) to the home of GAA Headquarters in Kildare, aka St Conleth's Park.
The opening words of that well known ditty goes along the lines:
I just dropped in to say hello sure I'll only stay a while,
I want to see how you're gettin' on, I want to see your smile ...
Leo was in Lilywhite Land to attend the funeral of the late Marian Finucane, so having come as far as St Brigid's Church in Kill, he decided to go the extra mile (or two) no doubt on the prompting of one of his right hand men, and make a visit to St Conleth's Park and throw an eye over just why Kildare GAA is in dire need of some state funding to get their revamped stadium reconstruction up and running.
Now the fact that a general election — depending on who you want to believe — is between four weeks and four months around the corner, could hardly be described as a co-incidence, but regardless, to see Leo and his fellow party members lining up for a pic with the Newbridge Or Nowhere mural in the background sent out all the right signals.
Leo arrived with no shortage of back-up with a host of Blue Shirts, (sorry, Fine Gaelers) in tow.
Kildare south TD and FG Parliamentary Party Chairman, Martin Heydon, certainly played a major part in this visit of his boss and there to meet him were Mick Gorman, Kildare Co. Board Chairman; along with executive board members Alan Dunney (Hon Treasurer); Dave Cahill (Hon. Secretary), Colm Farrell (Vice Chairman), and Cormac Kirwan, Operations manager.
The new Kildare boss, no not Jack O'Connor, Mick Gorman, certainly has the inside track these days, he being a close friend and fellow club man (St Laurence's) of the same Mr. Heydon, so it is probably fair to say, even expect, with Leo making an appearance in Lilywhite Land; the St Conleth's Park project getting the full backing of Croke Park (along with similar projects in Meath and Waterford) a positive announcement, prior to polling day, would certainly not come as any great shock or surprise.
Leo and his entourage were given a tour of St Conleth's by the GAA officials, which included Padraig McManus, Project Manager; for a project that includes the knocking of the old stand and replacing it with a modern all-seater jobbie, along with ancillary works, new dressing rooms, flood lights, the lot.

A vast amount of work has already been done by the project committee, and the GAA Board, to get this construction job close to start-up point. Permission has been granted, all the various stakeholders are on board, finance is practically in place, being funded from the Board's own resources, bank loans, along with a bit of a dig-out from Leinster Council, Croke Park and, an expected good dollop of moolah from Leo and his boys and girls.
The state funding aspect of the process lies in the hands of one Shane Peter Nathaniel Ross, Minister for Transport, Tourism and Sport, not forgetting he also holds the portfolio for Stepaside.
Now the Ross Lad has his hands full at the minute, what with sorting out the finances of the FAI, who find themselves in a bit of bother with debts of somewhere in the region of €60m, give or take five or ten big ones. The problems of the soccer folk will be sorted, and rightly so, although there has been concern that in doing so it could impact on what is planned for the centre of Newbridge, although that would be coming from a different pot, if you get me drift.
Minister Ross, is of course, also attempting to sort out the appointment of judges (to his way of thinking) — some would say putting his oar into a department that has nothing to do with him — not to mention his role in road safety, so a busy little buachaill is the Ross Lad.
We have been told that once the funding, loans, grants etc, are put in place, work can begin almost immediately and would take in the region of 12 months, to complete.
The look on Leo The Lad's face when he entered the dressing rooms at St Conleth's Park last week, I am reliably informed, was one that indicated his agreement that upgrading was more than just needed but was a necessity in this day and age.
One way or another we can confirm to the Taoiseach that Mick Gorman and his executive will gladly meet him for another photo op at the Newbridge Or Nowhere mural, once the cash is delivered.
And if Leo is too busy canvassing for you know what, no doubt his Parliamentary Party Chairman, Martin Heydon, will step in to take the plaudits.
And if the bauld Martin is not available, highly unlikely, I'm sure the bearded senator from Kill, would have no problem making himself available for the gig.
And sure all going well and when the job is completed, fingers crossed, Leo (if you are still around) maybe you might just:
Drop in to say hello and only stay a while; to see how we're gettin' on and really see a smile.
And Leo I can tell you if that happens you will see a smile the likes of which you have never seen before.
So let's be having you!

Then on Friday morning the much awaited announcement arrived with the news that a grant of €4.875m has been allocated for the project, that has a total cost of some €10m.
Brilliant news.
Well done to all concerned.
Next up: General Election '20!