Another county final day to savour for Moorefield 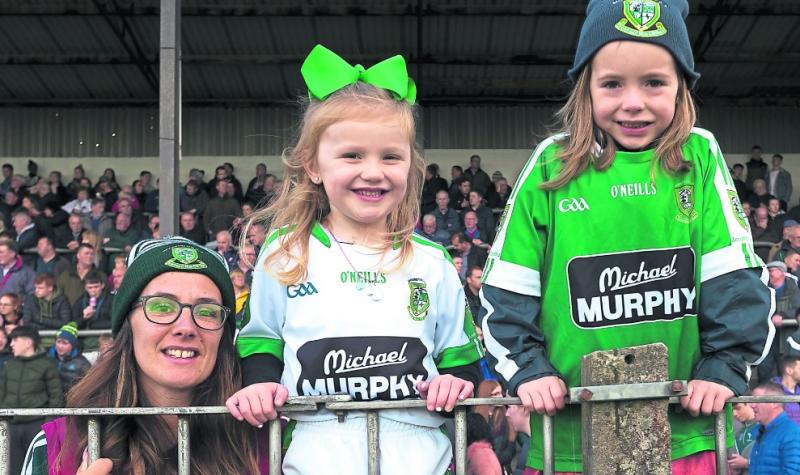 Early on Sunday morning we dropped into St Conleth's as preparations were getting under way for the biggest day in Kildare club football.
The stadium officials were arriving in numbers, while the stewards, the early arrival ones, were spotted checking under the soon to be demolished seating area.

Not sure what exactly they were looking for but all that was missing was a sniffer dog or two.
I enquired from head honcho Johnny Goulding, accompanied by Tom Cross and a few other concerned bib wearing volunteers but there was no response.
Were they checking to see if any overnight traps had been left for Moorefield and/or Athy supporters I wondered to myself.
At the back of the town goal, commonly known on county final days of late as Mooreshill, the 'Long Lad' had been in situ for a few hours, must have called in and decided to stay on his way home from first Mass.
There he was in all his splendour surrounded by green and white flags as he awaited fans of his own persuasion to join him.
The rain had arrived more or less as expected but we were told it would have moved on soon after the minor decider, which was somewhat unfortunate for the players of Naas and Clane.
Time to go and run the pig out of the cabbage before the action got under way I say to myself.
Returning a hour or so later the first one we bumped into was Athy chairman, Marty McEvoy, showing that no job was too menial for a man in his position he was carrying enough footballs that led one to wonder if there was one for everyone in the audience.
The minor boys were warming up watched by their respective managers Mickser Condon of Clane fame, and former Moorefield boss; while Naas manager, Niall Cronin was keeping a watchful eye on his charges warm-up. A man that has a good eye for thoroughbreds is Niall as his day job suggests, him being top racing writer with The Herald.
Naas went into this one as firm favs and looked all but home and hosed at half time but they had to withstand the mother and father of all come backs before eventually pulling clear and taking home the cup to the county town for the second time in three years. Some achievement.

Cian O'Neill was spotted wearing an impressive new top coat with matching scarf, Tammy no doubt after doing a bit of shopping for her man.
Time for the main act.
The warm-ups were, to say the least, more strenuous looking than an evening's training session.
Champions, Moorefield and challengers Athy marched behind the match day band as the fans from both showed their appreciation.
Finally we got under way.
And the flack started.
Moorefield's Sean Healy and Athy's Niall Kelly were making early acquaintances with one another that required some stern words from match official Billy O'Connell, the Dublin native taking charge of his first senior final.
When the corner back and corner forward dusted themselves off; Healy required a change of attire as his shirt looked like it had been in use since the Moores won their first final back in 2000 in this golden era of successes.
Calm restored but soon the Athy fans were up in arms as they roared for a penalty; but the match official, standing close by, refused to budge, much it has to be said, to the amazement of many.
The Moores responded with an attack that ended with Eddie Heavey filling the Athy net.
And it got better, or worse, depending on your allegiance as before the mid-way point Mark McDermott repeated the dose; add to that that the challengers were reduced to fourteen and the cup was all but booked into the top of the town of Newbridge for it's second year on the trot; its third time for two years in a row and incredibly its ninth time since 2000.
Athy did have their moments, two late goals, both from county man Kevin Feely brought late hope and some squeaky bum time for the champions but that was the height of it as the final whistle arrived.
The Moores having successfully defended one trophy, now begin the defence of another this Sunday as they take on Westmeath champions Mullingar Shamrocks.
One week on from winning a county championship and the Leinster champions are back in action.

Without doubt a crazy, crazy fixtures but that is the way fixtures have gone and unless someone stands up and cries halt, it will only continue.

It could have been worse though if last week's match had ended in a draw the replay would have been fixed for Saturday with the winners out within 24 hours in the Leinster Club.

Player welfare how are ye!

And just to show how totally fixtures have gone so far off the wall, both at club, provincial and national level, Kildare seniors are not allowed by Croke Park to return to training until December 8, the same as all teams who had reached the Super 8s this season.

Ironicall Kildare begin their O'Byrne Cup campaign, against Offaly, this year on ... yes you guessed it ... December 8. Crazy or what.

I rest my case!