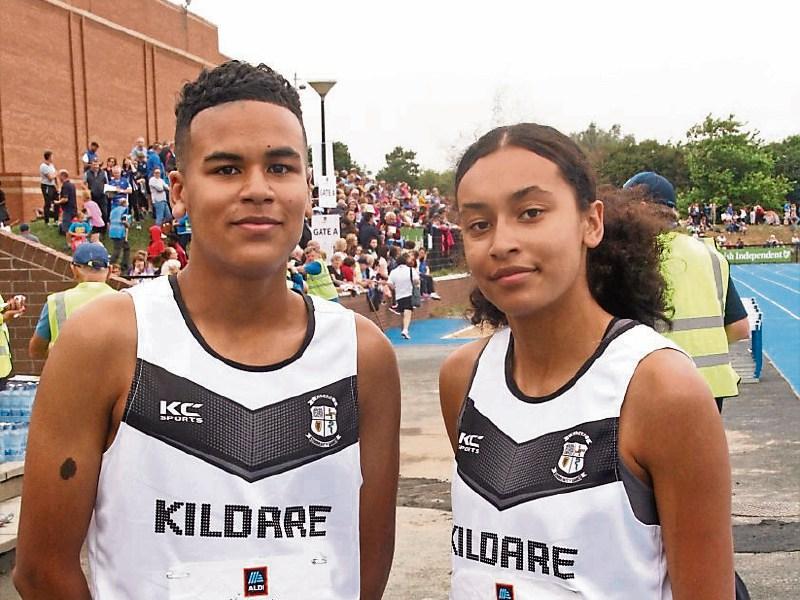 The 2018 Aldi Community Games festival was held in University of Limerick last weekend with children aged 6 to 15 taking part representing their counties in friendly rivalry over two days competition.

The Campus was alive with events taking place all over in outstanding facilities.

The UL Arena hosted the futsal, Spike Ball and Judo while out on the playing fields the Gaelic, Soccer, Rounders and tag Rugby finals were taking place.

Read also:Kildare's Adrian Melia (RIP), and Anne Maher honoured by the FAI for work and dedication


Meanwhile on the newly laid running track athletes were making a name for themselves. Kildare, wearing no 23, competed in all the events collecting 1 gold, 2 silver, 3 bronze and two 4th places medals in track and field.

On the track Runo Ayavoro from Newbridge St Conleth’s powered down the straight to win Gold in U16 100 Metres. Laura Byrne from Eadestown cleared her hurdles to take Silver in U14 80m Hurdles while Bronze Medals went to Peter Hamilton in U16 1500 Metres and to Max Tracey (Monastrevin) in U12 600m.

Doireann Lanigan ran the race of her life to take her first National Medal running on for fourth place in U8 80 metres.

The Field Events produced Medals for Paddy Taylor (Kilcullen) Silver in U14 Javelin, Hannah Wilson (Kildare Town) Bronze in U16 Discus and Lara Prendergast (Suncroft-Curragh) 4th in U14 Javelin.

The Futsal Boys U13 boys beat Ennis St Johns, Co Clare 3-1 in the Semi-Final but lost out to Aughanagh(Sligo) 4-3 after extra time in Final to win Silver.

The Under 11 Tag Rugby team lost out to eventual winners Regional from Limerick by 2 tries but stormed past St Mary’s Sligo 12-6 to win Bronze.