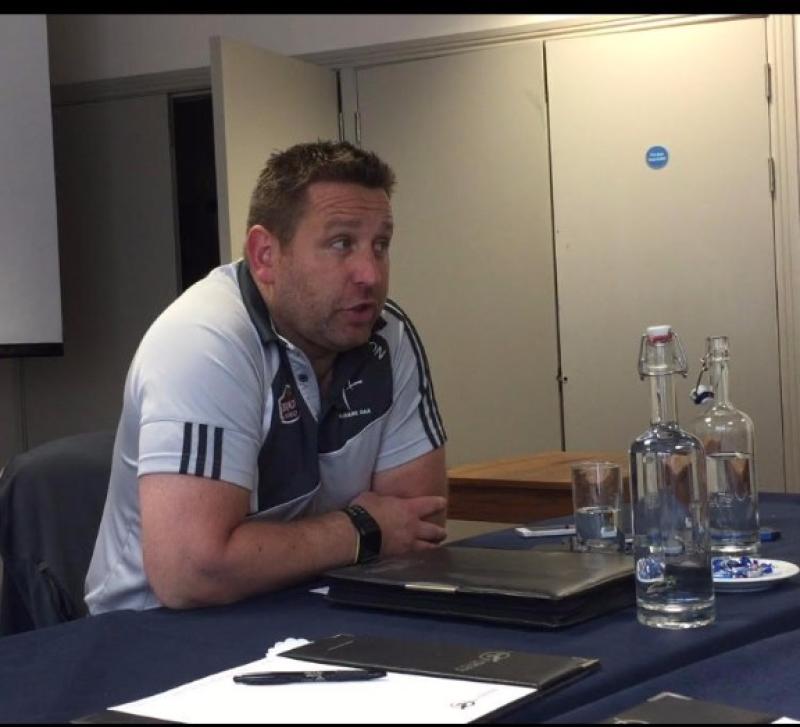 Cian O'Neill speaking at a conference held this morning.

Kildare Senior manager Cian O'Neill has ruled out any major injuries to the team at this point ahead of the Leinster Senior Football Championship Final in Croker on Sunday July 16.

At a Press Conference held this morning, O'Neill said he was impressed by Dublin's performance against Westmeath last Sunday but said by and large Kildare have been fairly happy with how they performed in every match this year.

"I think we've invested a lot of time, energy, hard-work into trying to get our game plan right that suits the players we have, which is a uniquely different squad to what we had last year".

O'Neill added that the team was very disappointed with the performance in the league final against Galway saying the team 'under-performed', but said they have tightened up after it.

"We've had some good wins in Division two but then Galway were the best team we played by some distance in that final and we came up short, so I think that was kinda a reality that dawned on us.

"In fairness to the boys in the last five/six weeks when the real pre-championship phase kicked in they've been absolutely fantastic, and they're working really hard.

"They're a young team, we've got a couple of very experienced players that have been around your 10 year/12 year period, we've a couple of guys who are kinda in there six/seven years but by and large 80% of our team is 24 years and under, and that's a really exciting place to be."

He added that this year the team are a lot more confident and happy with the style of football they're playing but says there are still things to work on ahead of their clash with Dublin, describing them as "one of the best teams in the modern era".

"You could see their movement, speed, the fluidity, timing last week, it really was impressive. You could see a lot of carefully devised moving plans there, so we're trying to tighten that up defensively".

The return of Paddy Brophy has been a huge boost for Kildare, and his club Celbridge.

"He's a brilliant club man as well as a brilliant Kildare man. Every time he was home he always tried to get back in with the club where he could. So he didn't lose touch with the game as such.

"That being said, the transition back in as quickly as he has for me is quite phenomenal.

"He's been brilliant and he carries a lot of respect in the dressing room. He's been a great guy as well as a great footballer, I think there's a lot to be said for that".

The Kildare team held a meet and greet with fans in St. Conleth's Park this afternoon, and are looking forward to the whole county getting behind them in the exciting lead up the Leinster Final.