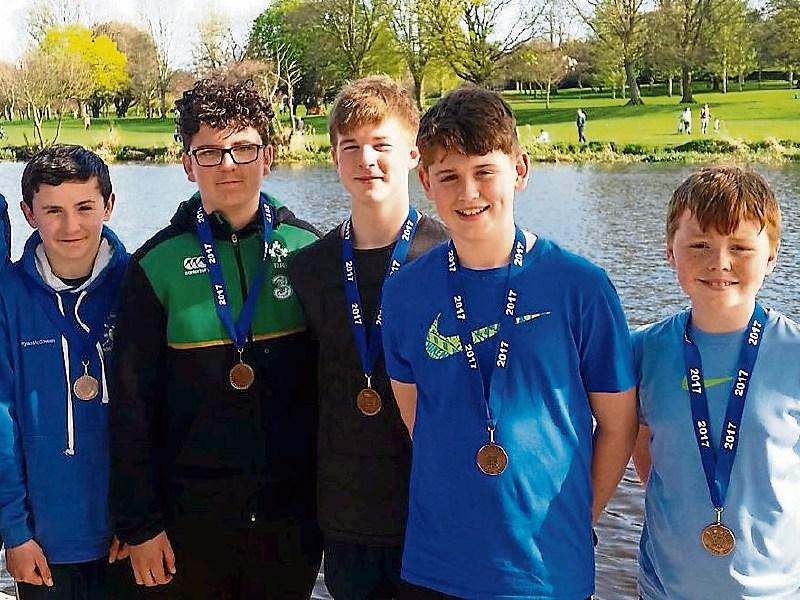 The Carrick-on-Shannon Rowing Club Men's squad pictured at the Commercial Regatta in Dublin.

Carrick on Shannon Rowing club are delighted to announce the second annual Lough Rynn Regatta will be taking place this Saturday May 13, at what is now Ireland’s premier rowing venue.

This massive event for county Leitrim will welcome over 800 crews from over 40 of the country’s rowing clubs.

Racing will take place on eight lane Olympic standard course from 8am right through to late evening with races coming down the course at intervals of approximately five minutes.

This event organised by the Connacht Branch of Rowing Ireland in association with excellent local support from the friends and members of Carrick-on-Shannon Rowing Club.

Any member not taking part will be hard at work supplying food, assisting visiting crews, marshalling, umpiring and ensuring the safe running of the event.

The races will feature some of Ireland’s finest Senior Rowers, up and coming talent right through to junior rowers that are enjoying their first season on our waterways all looking forward to a good day’s racing at the Leitrim venue.

It is a tribute to the vision of club stalwarts Tony Keane and Gabriel Cox who in association with Leitrim County Council brought the idea of this course to fruition that there will be a record entry this year.

The work overseen and developed by Leitrim County Council is ongoing with further infrastructural development this year.

On the local front, the club have enjoyed some very successful regattas in recent months taking away five wins at Commercial Rowing club regatta in Islandbridge Dublin with a further three wins for Carrick man Thomas Earley at Portadown Regatta.

These wins were backed up with some near misses in finals and semi-finals at both regattas.

We are further delighted to report that over 40 Junior Oars represented the Carrick club at these events.

This success is made possible through the work of our small team of dedicated coaches under the leadership of club captain Mr. John Lowe. We hope to add to our recent success with more performances at Lough Rynn Regatta, Athlone Regatta and the National Rowing Championships in July.

The club are also pleased to report on the recent “Service to Irish Rowing Award” received by club chairman Gabriel Cox from incoming President of Rowing Ireland Eamonn Colclough. Gabriel is one of the cornerstones of our club and he has ensured the survival and development of the club through thick and thin.

In his current role as club chair he is spearheading a drive to better the equipment pool available to the club and the purchase of more oars and boats are on his agenda. He is known nationally for his attendance and support of club regattas, most recently in Portadown and his expert eye for technique. Congratulations Gabriel from all your friends and colleagues at the club.

Finally everyone at Carrick Rowing Club wish to express their sympathies with the families and friends of Joe Flynn and Joanna Duignan. The county has lost two exceptional sporting ambassadors and two wonderful people.