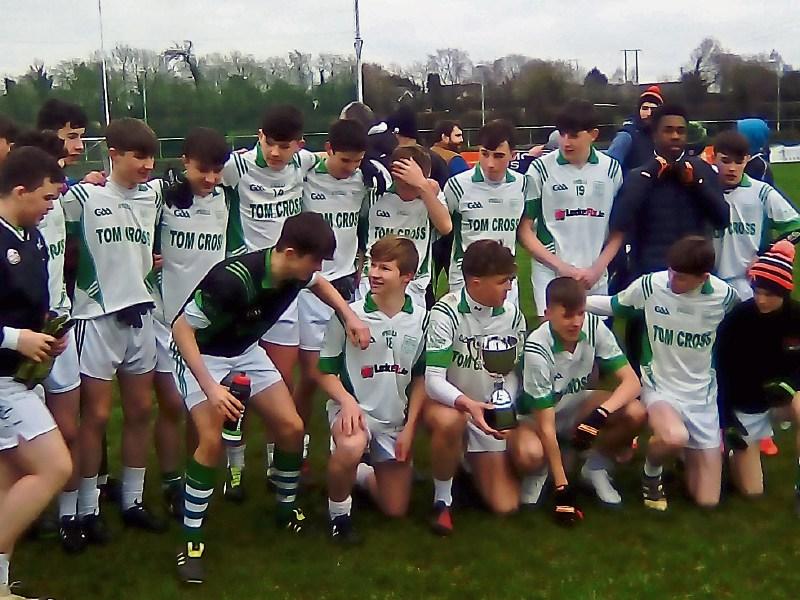 Five red cards  lit up a bitterly cold afternoon in Hawkfield Centre of Excellence, this afternoon (Friday February 10) when Scoil Mhuire, Clane, defeated Maynooth PP in the Kildare Junior Colleges ‘A’ Football final, in a game, despite the multitude of cards could hardly be described as dirty.

In fairness to referee Eoin Murphy, most of the cards were warranted with Maynooth picking up three reds (two double yellows and a straight red) while Clane lads were shown two straight red cards; Maynooth also picked up a black card on the stroke of half time.

Scoil Mhuire, dominated for most of the game, led 1-10 to 0-2 at the break, their handling, score taking and overall general play was far superior to Maynooth’s play who were turned over time and time again throughout the game.

The star of the show was, without question Clane no. 11 Shane O’Sullivan, even apart from his total of 1-7, his overall strength and skill stood out from start to finish. He had excellent support from Eoghan OHehir while James Behan also caught the eye.

Maynooth could have been much closer at the break but two magnificent saves from their custodian, John Ball, kept them at bay.