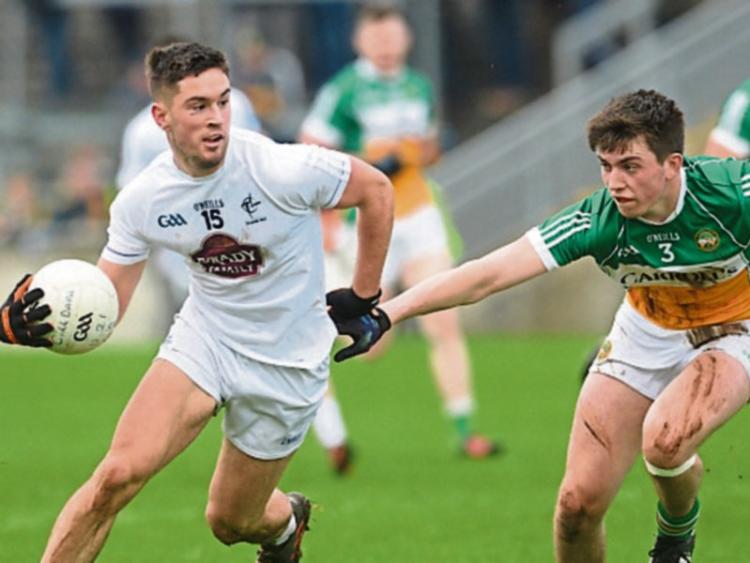 Ben McCormack tries to get around Offaly full back, James Lawlor in this afternoon's O'Byrne Cup

Kildare eased their way into the semi final of the Bord na Mona O’Byrne Cup with a twelve point win over a hapless Offaly side in O’Moore Park, Tullamore, this afternoon.

The game was all but done and dusted after thirteen minutes when referee Patrick Maguire dished out a straight red card to Nigel Dunne of Offaly, a decision that seemed to be taken after talking to the linesman, but one that certainly looked harsh.

At that stage Offaly led by a point but from there to half time Kildare dominated going in at the break leading 2-8 to 0-2, the goals coming from Niall Kelly and Tommy Moolick.

Offaly did improve on the resumption scoring the opening three points and when Kildare’s Shea Ryan was given a straight red, again with the assistance of the same linesman and again deemed harsh by most observers, but a second Tommy Moolick goal on 49 minutes finally put Offaly out of their misery.

Both managers were taken aback by the red cards. Offaly boss, Pat Flanagan, insisted it was extremely harsh while Kildare boss, Cian O’Neill said that after viewing video evidence they will be appealing Shea Ryan's dismissal.

Full report and reaction in this week’s Leinster Leader.