Legendary guitarist was in Athy, Co Kildare, on Friday lunchtime to dedicate 'Made in Athy' plaque 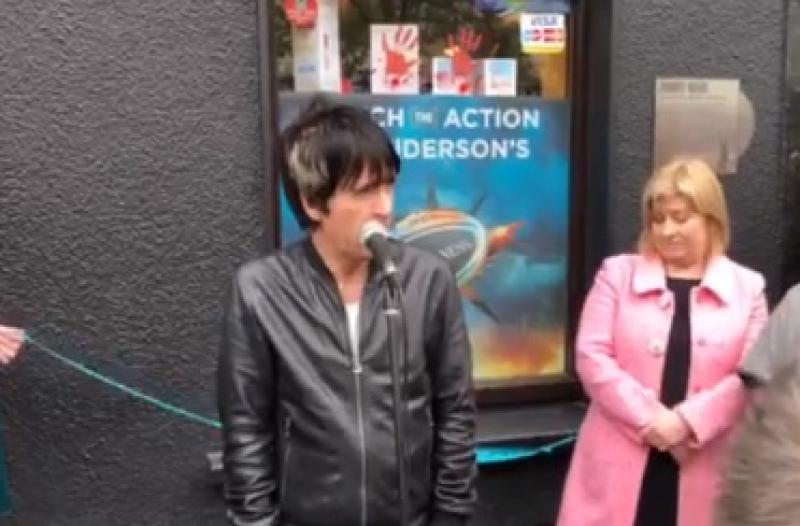 Johnny Marr in Athy on Friday

Legendary guitarist Johnny Marr sent his "thoughts and wishes and prayers to those involved" in the tragedy which has hit Athy over the last 48 hours.

Nurney man David Boland died after being stabbed on Duke Street in the early hours of Thursday morning. Two have been arrested in connection with the incident.

"I was very, very sad to hear about that," said the ex-Smiths guitarist, who was at Anderson's Bar in Emily Square on Friday lunchtime to dedicate a plaque as part of the 'Made of Athy' music trail.

WATCH JOHNNY MARR UNVEIL HIS 'MADE IN ATHY PLAQUE'

The 'Made of Athy' series, which celebrates the music history of the south Kildare town, is the brainchild of local man Colm Walsh. The initiative is supported by Kildare County Council and will be rolled out in coming months.

Johnny Marr was born John Maher in Manchester in 1963 to Frances Doyle, originally from Maganey and John Maher, who was from Nicholastown.

He dedicated the plaque to his parents and "all the Doyles and Mahers everywhere in Kildare."

Read also:  Johnny Marr, guitarist with The Smiths, in Athy this Friday