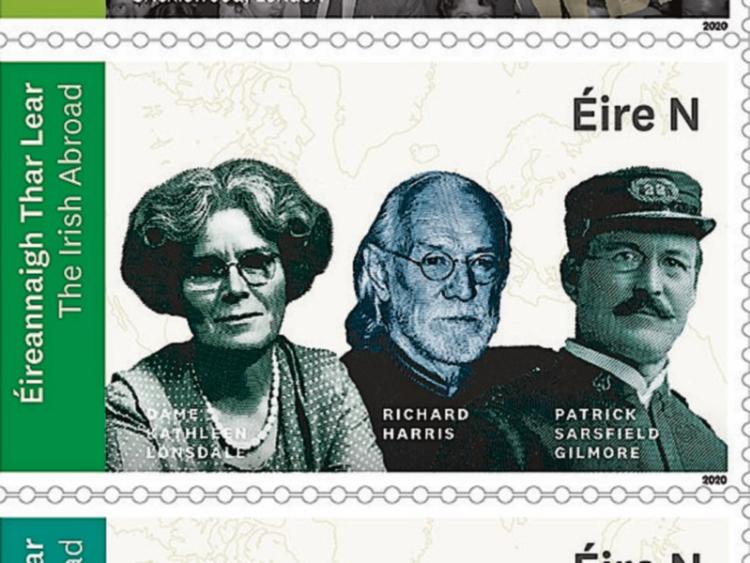 A Kildare woman appears on a new Irish stamp being launched by An Post this week.

Newbridge born scientist, Dame Kathleen Lonsdale, is featured on one of  five stamps issued on the subject of The Irish Abroad, highlighting the shared experiences of Irish people leaving Ireland for economic, cultural and humanitarian reasons.

Designed by Irish company, ZeroG, the new stamps are available in main post offices, at the GPO, Dublin and online at anpost.com/shop.

She appears on a stamp along with actor, Richard Harris, and musician, Patrick Sarsfield Gilmore.

Born in County Kildare in 1903, she was one of the first two women to be admitted as fellows to the Royal Society.  She became a Dame of the British Empire.

In her scientific career she developed several X-ray techniques for the study of crystal structure and the first female Professor of Chemistry and Crystallography at University of London.

She was also an anti-war campaigner, writer, mother, and former inmate of Holloway Prison.

Patrick Sarsfield Gilmore was born in 1829, raised in Galway. He served as a stretcher bearer and musician in the American Civil War and became bandleader, composer and showman who played to millions across America during a forty-year career in the second half of the nineteenth century.

Richard Harris was born in Limerick in 1930.  He studied at the London Academy of Music and Dramatic Art and made his stage debut in 1956. His acting career spans four decades and he received the 1990 Evening Standard Theatre Award for playing Pirandello's Henry IV.

Minister of State for the Diaspora, Ciarán Cannon, said he was delighted to see the launch of this set of stamps which commemorate the Irish emigration experience, and honour the contributions of the global Irish diaspora.

He said it  is appropriate that this collection pays tribute both to the painful aspects of emigration – the separation, and the challenges of staying connected across great distances - but also to the many success stories of the Irish who settled in their new societies and thrived there. “As these stamps travel the world, they will tell the story of the extraordinary resilience of the global Irish who overcame great challenges and flourished in the new homes they made overseas.”

A world premiere show at the Riverbank this month will highlight the life of  Kathleen Lonsdale.

The Lonsdale Project, written and directed by Sian Ní Mhuirí, is a new theatre show for young people from the ages of 11 years plus that connects science with real events and spotlights the  story about the life and work of the pioneering scientist.

They will also open an exhibition in conjunction with the premiere of the play on March 12 to explore a day in the life of the scientist.

Lonsdale was a prominent chemist, crystallographer, anti-war campaigner, writer, mother, and former inmate of Holloway Prison.  She was incredibly renowned in her time.