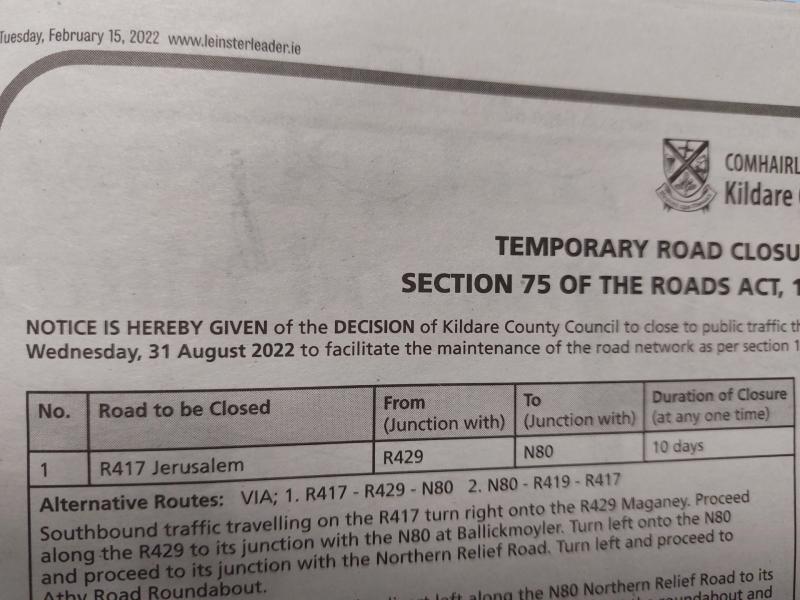 Christ, we’re edgy enough around here without this.

Sleep comes slowly and grudgingly these long nights, if it comes at all.

What with Russian troops and tanks massing on the border with Ukraine, ongoing uncertainty over the ramifications of Brexit and fear of another Covid-19 strain, the last thing we need is another international crisis.

But it seems Kildare County Council has left the reservation, so to speak.

It’s gone and decided to close the road to Jerusalem.

Yep, a public notice to that effect has just appeared in the Leinster Leader.

There’s no by your leave here, no setting up a raft of sub committees or seeking approval from some higher authority.

And neither is the council hanging around.

The closure is taking effect from March 1, which hardly leaves enough time to arm the resistance

And it’s being done up front.

It's not trying to camouflage its intentions.

The Jerusalem road closure is only one of many and no attempt has been made to hide what’s happening.

It’s at the very top of the list, the first of ten closures around the place and it’s there to be seen in black-and-white.

How have we arrived at this point ?

Maybe the council’s nose is out of joint ever since then President Donald Trump decided to recognise Jerusalem as the capital of Israel instead of the more populous Tel Aviv and then to move the US embassy from Tel Aviv to Jerusalem.

Perhaps KCC’s unilateral action is a protest on behalf of the Palestinian people, who claim that the city is also their capital. And after all, some of Jersualem is recognised by the United Nations as Palestinian territory.

It must have to do with Trump or the Palestinian cause.

Because the most noteworthy event to take place in Jerusalem recently was the inaugural conference of the Association for Cognitive Bias Modification, a medical/pharma gig not expected to attract more than a couple of hundred. We've been to livelier funerals.

We may manage a pale smile about this at some future time, but these are the days of being easily spooked.

For now, we’re just trying to make sense of it all.