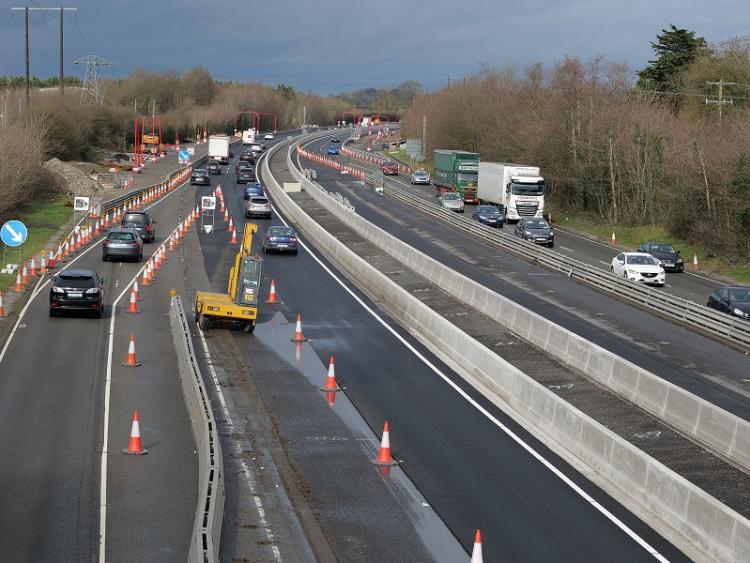 Motorists using the M7 on the outskirts of Naas will continue to experience traffic hold-ups until July.

Expectations that the work might be completed this month have evaporated. However according to Kildare County Council no particular problem has caused the delay.

KCC’s Director of Services Roads, Transportation and Public Safety Niall Morrissey said the mooted April opening was only ever an estimate.

“This is a difficult project which is being delivered in a relatively tight space. There is no single issue that has delayed it, but apart from the road widening there are considerations such as providing 14 kilometres of drainage and 14 kilometres of ducting,” he said. The ducting is needed to house service and utility cables.

While the expected completion is now July, KCC says that a section of the new motorway will open before then from Junction 8 (Johnstown) to Naas South within the next six to eight weeks and will be fully operational with a speed limit of 120kph.

The work is proceeding in tandem with the bypass of Sallins and the construction of an interchange at Osberstown, which will provide a link with Millennium Park.

KCC also says the bypass and interchange are scheduled for completion before the end of this year. The total estimated cost of all three jobs has been put at €110m. The most expensive of the three is the road widening work, which has been estimated at €55m.

It was originally anticipated that all of the new infrastructure would be open by for use by early 2020 — so if everything is completed by the end of this year the work will have been done ahead of plan. The Sallins by-pass will be both dual carriageway and single carriageway and will divert many of the estimated 20,000 vehicles which are currently passing through Sallins every day.

The bypass will be linked to the Sallins town centre by a 1.2km road.