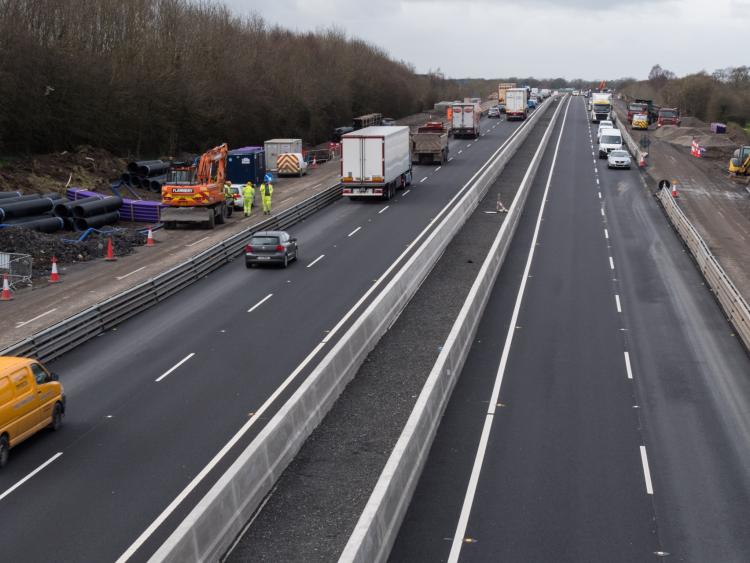 Roadworks on the motorway near Naas. PICTURE: TONY KEANE

The Courts Service is struggling to cope with a huge influx of speeding prosecutions after more than 4,000 people were detected breaking the limit at the N7/M7 roadworks near Naas.

An internal document seen by the Leinster Leader reveals that a large number of those 4,000 have not paid the penalty that was issued in the post, and therefore will be prosecuted before the courts.

Local Courts Service staff believe that if the courts continue to deal with speeding cases at the same rate as they do now, none of those detected during the roadworks, which are set to end in the coming weeks, will be called to court until 2020.

The news comes just a week after the sitting District Court judge for Kildare, Desmond Zaidan, called for a second judge to be appointed to help cover the expanding area and workload of the local Courts Service, a call that was supported by a local solicitor, and by figures which indicate a 40% increase in case numbers in the past five years.

Speaking during Kilcock District Court on March 5, Judge Zaidan said that in 1950, when only one judge served the entire county, they might only deal with 10 cases a week. But in 2019, there are now a thousand cases a week coming through the District Court system.

Read also: 12 cars impounded by gardaí for having no tax, insurance or NCT at Kildare checkpoints

On Wednesday, March 13, before another packed sitting in Naas courthouse, Judge Zaidan expressed his frustration about the huge number of speeding cases coming his way. Two Go Safe speed detection vans were installed at the roadworks on November 26 last year, between Junctions 8 and 11, to clamp down on speeding while works are continuing on the N7/M7. In their first day of operation, more than 100 motorists were detected exceeding the limit.

Up to that point, since the roadworks began in January 2018, gardaí had reported making 500 detections.

Court appearances for those who fail to pay fines issued after detections by Go Safe vans currently take their place on the court lists on the second Thursday of every month.

There are currently 2,952 Go Safe van detected cases listed before the court for this year alone, on average, 369 cases listed for each of those days set aside to hear those cases, with another 338 awaiting scheduling to a court date.

Court Service staff have made a number of suggestions to accommodate the increased numbers, including holding court sittings on Fridays or in those months where there is a fifth week (which currently do not happen); or arranging for a visiting judge to sit in Naas on the second and fourth Thursday of the month.

Alternatively, there is a suggestion that a visiting judge might sit in Athy courthouse on days when the regular court does not occur there.

The roadworks on the M7 began in January 2018 and will widen the road from two to three lanes from the Naas exit to the turnoff for the M9 motorway on the Newbridge side of Naas.

It is an attempt to reduce traffic jams that were building up at the point where the road changes from three to two lane. The works are due to be completed in the coming weeks.