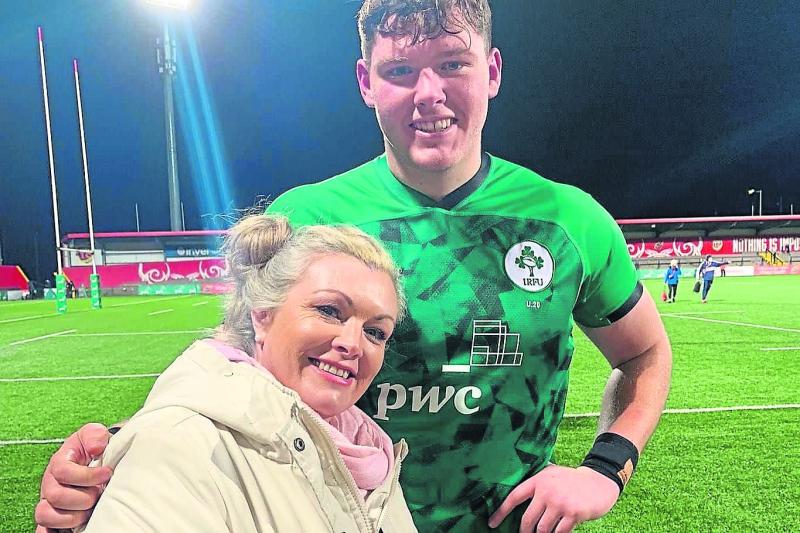 Oisin and his mum, Barbara

Coming off the back of a fantastic Six Nations Grand Slam victory, Ireland U20s player Oisin Michel has signed for the Connacht Academy.

The Newbridge resident didn’t come up through the traditional rugby schools ranks. A product of the club game, he hasn’t forgotten his roots.

“I started playing at U13s at Cill Dara under coach Robbie Doyle. I gave it a go two years before that, but my mother was unhappy because she didn’t want me to get hurt,” said Oisín.

“I was a big lad and someone suggested I give it a go again, so I did.

“The coaching was fantastic. I think small clubs like that need to get the recognition they deserve. They give the players the skills and teach them the basics and then it’s up to the player themselves to take it from there. I wouldn’t be where I am today without them.” Oisín attended the Patrician Brothers Secondary in Newbridge.

While playing with Cill Dara, the loose head prop, who turned 20 last Monday, impressed at trials for Leinster youths and represented the province on several occasions. Having played for the Cill Dara U18s, he then moved on to Lansdowne. However, Oisín wasn’t selected to take part in the first training camp for the Ireland U20s.

“It was disappointing at the time. It was disheartening but there was so much competition. It was great because we pushed each other and made each other better. It made that bond stronger,” he pointed out.

Not to be left out for long, Oisín was drafted in for the second camp and then represented Ireland in the Six Nations campaign, winning, their third ever Under-20 Six Nation Grand Slam in style.

“I was delighted. It was a great experience. I learned a lot from the coaches and I made some really good friends, especially the lads from Ulster,” said Oisín.

He said there is a huge amount of young talent coming up through the ranks.

The Agricutural Science student at UCD was still keen to move on to the next step in his rugby career. Playing with Leinster, he wasn’t offered a contract, so when Connacht came calling, he jumped at the chance to move to the province. When told he would have to repeat his second year in college if he transferred his course to Galway, there was no hesitation. “I just want to play rubgy and if that’s what it takes, that’s fine.”

He hopes to secure a professional contract with Connacht down the line. In the immediate future, he also hopes to retain his place for the U20s summer tournament in Italy in June where they face France, England and South Africa.

Cheered on by his mum Barbara, brother Evan and sister Faye, Oisín has a great support network. He has also benefitted from his time at Leinster.

“Sometimes you get to train with the senior team, like recently with players being in South Africa. It was great. The players are very intense on the field but they are lovely off the field.”

Standing on the pitch representing Ireland for the first time, Oisín thought to himself; “How did I get here? I never thought I would see myself here. When I was young and watching the U20s on the television they looked so big, I never thought it would be me out there,” he said. The Kildare man has his feet firmly planted on the ground. “I could get injured or lose form so I just take it as it comes — like a fresh start every time and keep pushing the standards.”