BREAKING: Two found guilty of assault in which Kildare man lost half of ring finger 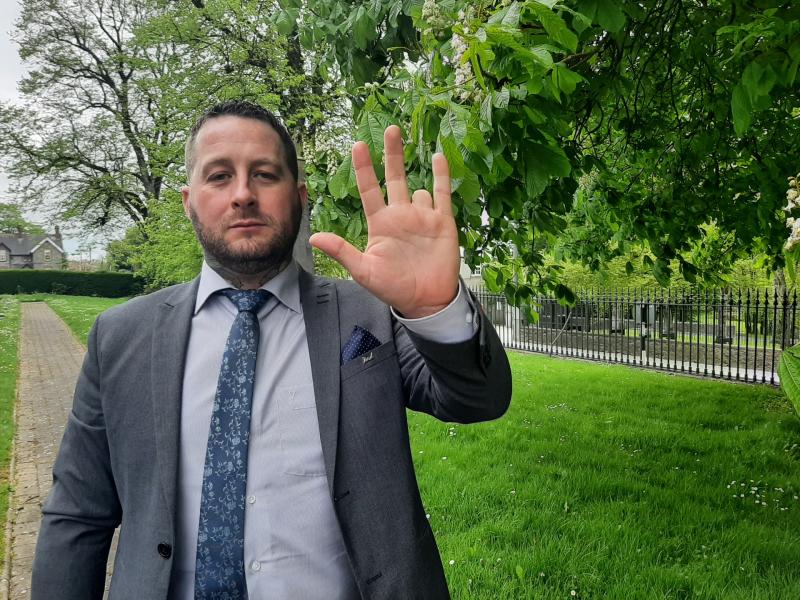 Two men have been found guilty of an assault in Edenderry which resulted in a Kildare man losing half of his ring finger.

Craig Connolly (30), Kinnefad, Edenderry, had denied assaulting Keith Dunne, causing him serious harm, and he had also pleaded not guilty to being in possession of a pull saw at the time of the offence on June 18, 2020.

A co-accused, Sean Dillon (42), St Brigid's Road, Edenderry, denied assaulting Mr Dunne causing him serious harm, and it was the State's case that he acted in common design with Mr Connolly or aided and abetted the other defendant.

A seven-day trial at Tullamore Circuit Court heard that Mr Dunne (36), a construction worker, was holding a barrier at JKL Street, Edenderry to prevent debris from going out onto the road while his employer was breaking concrete on a footpath.

A hooded man who was wearing a face mask came from across the street and struck Mr Dunne on his hard hat with what he thought was a machete.

The blow bounced from the hard hat onto his nose and then another downward strike resulted in fingers on Mr Dunne's left hand being severed.

The ring finger was reattached but after a number of months it had to be amputated at the lower knuckle because of repeated infections.

The blade of a Japanese pull saw, 37cm long and with teeth on both edges, was found at the scene and forensic tests showed that it had a partial palm print which matched Mr Connolly and blood which matched Mr Dunne.

Mr Dunne had told the court he identified the attacker by a unibrow and a scar on his forehead.

Mr Dunne also said he knew Mr Connolly, who was at the time in a relationship with Sophie Judge, the mother of Mr Dunne's child.

In interviews with gardai after his arrest, Mr Connolly denied ever meeting Mr Dunne and said he had been drinking all that day, a Thursday, and continued drinking until Sunday.

Sophie Judge, his partner at the time of the assault and mother of Mr Dunne's young son, gave alibi evidence that Mr Connolly was with her and the child when the offence was committed.

She told the trial she was shocked at Mr Connolly not telling the gardai that and she could not explain why he had said he was out drinking.

The jury heard that Sean Dillon had said he was driving around Edenderry on the day of the assault because he was looking for his mother, who he said was shopping, and he also wished to go to the Credit Union, but realised he had forgotten his book.

Mr Dillon had said in a statement to the gardai that somebody had got into the back of his van that afternoon but he did not know who that person was and he had let the perpetrator of the assault into his vehicle under duress.

The jury viewed CCTV footage recorded from a number of different premises in Edenderry which showed a white van driving around the town centre and the State's case was that it was scouting the location of the assault.

Some of the CCTV footage also showed two individuals walking and running along footpaths in Edenderry and a clip also recorded a figure running across the street to where a digger was being operated, the site of the assault.

That figure was then seeing going back where it came from.

After deliberating for more than three hours, the jury found Mr Connolly guilty of assaulting Mr Dunne, causing him serious harm. He was also found guilty of possession of the pull saw.

They found him not guilty of a charge which alleged he caused Mr Dunne harm.

Mr Connolly has been in custody since June 2020 and he was remanded in custody again for sentencing to July 19 next.

Mr Dillon was remanded in custody for sentencing on the same date after Judge Keenan Johnson refused an application for his bail to be continued so he could make arrangements for the care of his 79-year-old mother.  Judge Johnson ordered a probation report for Mr Dillon.