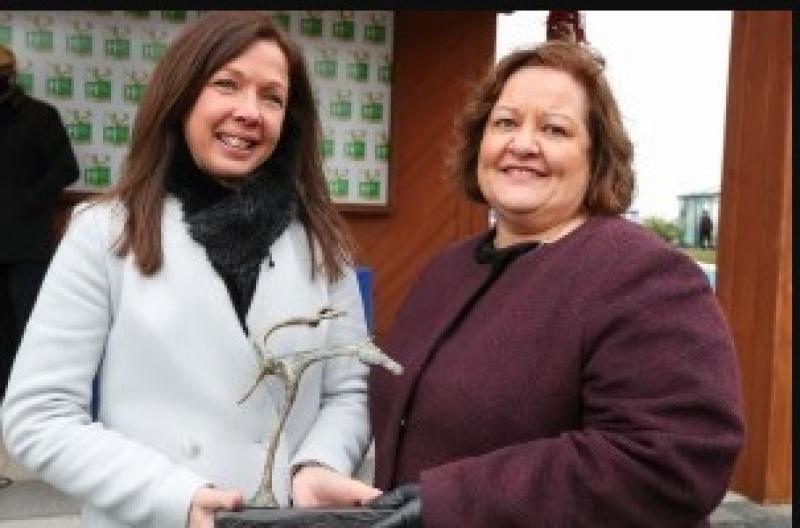 A Kildare doctor has been recognised for her huge contribution to horse racing.

For her tireless work in ensuring that racing continued to run smoothly and safely during the Covid-19 pandemic, Dr Jennifer Pugh, Senior Medical Officer of the IHRB, has been honoured at the 2021 Horse Racing Ireland Awards, which were broadcast last night.

Kilmeague-based Jennifer is the recipient of the Contribution to the Industry Award and she joins Rachael Blackmore and history makers Henry de Bromhead and Colin Keane on this year’s roll of honour.

Horse Racing Ireland Chairman, Nicky Hartery, commented: “It is fitting that those who achieved such great success on the racecourse share our awards’ limelight with Dr Jennifer Pugh. Jennifer went above and beyond all that is expected of her in the role of Senior Medical Office of the IHRB to keep the industry running safely as the Covid-19 pandemic again threatened to disrupt the racing year. I thank her most sincerely for all her work and congratulate each of our winners for their tremendous exploits in 2021.”

Rachael was previously announced as the winner of the Racing Hero Award on the back of her historic achievements at Cheltenham in March and at Aintree the following month.

The 10 winners of the 19th annual HRI awards are:

Henry de Bromhead is the winner of the National Hunt Award. In March, he broke new ground when becoming the first trainer to win the Champion Hurdle, Champion Chase and the Gold Cup at the Cheltenham Festival in the same year. He again rewrote the record books a matter of weeks later when becoming only the second trainer, and the first since 1908, to saddle the first two horses home in the Aintree Grand National.

The Flat Award goes to champion jockey Colin Keane. Colin was the star performer of the 2021 Irish Flat Season, dominating from a jockeys point of view as he captured a third riders’ title. He notched up the fastest century of winners, bettered Joseph O’Brien’s 2013 total of 126 and then set a new record of 141 winners with a final day double at Naas.

The Kenny Alexander-owned Honeysuckle again won all before her and takes the Horse of the Year Award. Easily the most popular horse in training, she topped a remarkable season with success in the Champion Hurdle at the Cheltenham Festival. She rounded off last season when winning the Champion Hurdle at Punchestown at the end of April and made a stunning start to her 2021/2022 campaign with a third successive win in the Grade 1 baroneracing.com Hatton’s Grace Hurdle at Fairyhouse last month.

From Letterkenny, County Donegal, Dylan Browne McMonagle crowns a terrific year with the Emerging Talent Award. He rode an impressive 48 winners to become champion apprentice and his season’s highlights included a first Group race success on Baron Samedi and a first win at Listed level with Mighty Blue, two of the 24 winners he rode during the season for Joseph O'Brien.

Success at both the Dublin Racing Festival and the Cheltenham Festival with Heaven Help Us sees Paul Hennessy win the National Hunt Achievement Award. The mare was one of the star performers at the beginning of the year, racing to victory in the Irish Stallion Farms EBF Paddy Mullins Mares Handicap Hurdle at Leopardstown before winning the Coral Cup by all of nine lengths at Cheltenham. The John Turner-owned seven-year-old was ridden on each occasion by Richie Condon.

John Nallen had three weeks last spring that will last a lifetime and is the winner of the Point-to-Point Award. Two horses that started out with him in the point-to-pointing field went on to win two of the biggest prizes in racing. Minella Indo, which had made a winning debut for the Clonmel hotelier in a five-year-old maiden at Dromahane in March 2018, won the Cheltenham Gold Cup almost three years to the day of his initial success and three weeks later it was the turn of Minella Times to propel John back into the spotlight when racing to Grand National success at Aintree.

Ado McGuinness wins the Flat Achievement Award for his late season success with A Case Of You in the Prix De l’Abbaye. The Lusk-based trainer enjoyed significant premier handicap, Listed and Group race wins in the preceding months but reached a new level as the Gary Devlin-owned three-year-old scored a memorable last-gasp Group 1 victory at ParisLongchamp in October.

The 2021 Ride Of The Year Award was a public vote and coming out on top was Darragh O'Keeffe’s winning effort on A Plus Tard in the Savills Chase at last year’s Leopardstown Christmas Festival. It was Darragh’s first outing in a Grade 1 race and he made the most of the opportunity to land one of the biggest races of the National Hunt season.

Suzanne Eade, Chief Executive of HRI, said: “I am delighted that we can pay tribute to those who achieved so much and made such telling contributions to our wonderful industry in the past 12 months. Jennifer and Rachael have been two of our leading lights and their awards are so well deserved. As we saw at Fairyhouse only a few weeks ago, Honeysuckle is certainly the darling of the racing public and I congratulate her owner Kenny Alexander on her achievement in winning the Horse of the Year Award.”