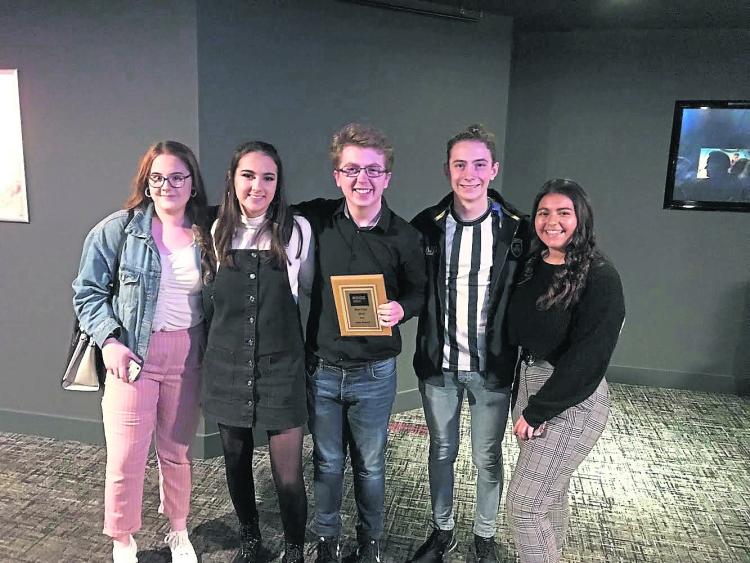 SEE ALSO: Kildare farmers to feature on RTE's Ear to the Ground

NOISE is a film festival for 14-18 year olds, and is an initiative of South Dublin County Council’s Arts Office.

Liam spent months brainstorming for his short film, simply entitled Film. It’s about a young filmmaker’s journey in attempting to overcome her past.

“I always loved the idea of telling stories. I originally wanted to be an author, however when I was 14 I found out about a film club that was right on my doorstep. It was in my local library (Leixlip Library), and ran every Thursday night. They called themselves Kildare Young Filmmakers, ran by visual artist John Conway,” Liam told the Leader.

“Being in the film club has changed my life forever, it made me find my passion for making films. They’ve taught me everything I know about filmmaking, such as how to use a camera, sound recorder, editing software and how to use all these effectively,” he added.

Filming was completed over a three week period during the summer holidays.

“The film included a cast of nine altogether, which was a bigger cast than I had ever worked with in Kildare Young Filmmakers. I pulled together all of my contacts and luckily all the actors I got in touch with were more than happy to work with me on this film.

“I also decided to be the only crew member, that is, director, cinematographer, sound, producer all in one. This was for efficiency, and worked very well in the end.

“It was a wonderful experience as the cast and I became very close. We still keep in touch and they were present when I received the award for best film at NOISE film festival.”

Liam said he knew he had created something special, so decided to enter it into NOISE.

“I had attended it in previous years. One thing I can say is that the standard of films made by young people has increased greatly with each year I have gone.

“This year was no exception, the quality of films I saw was very high. When I first went to it three years ago, I felt that I would never be good enough to ever be in a chance of winning an award.

“However, this year I thankfully proved my younger self wrong. I will never forget the moment that Film was called out for the best film award. To say I was over the moon was an understatement, this was the first award I had ever won. I made the cast come down with me to receive it.”

Liam is encouraging more young people to get into filmmaking, and has advice for those starting off.
“Whatever age you are, it’s never too late. Start writing down ideas, devise a short film that is achievable to make. Keep films short, they’ll be a lot easier to make. Shorter films are often better.

“Pour your heart into the story and watch as many YouTube videos on shot composition and film techniques as you can. Film on your phone and use a free editing software if you have to. Gather your friends or those who would be interested and ask them to act in your film. If this is your passion just start, make your mistakes now and learn the basics.”

If you are interested in joining, you can find out more at Kildare Young Filmmakers on Facebook.