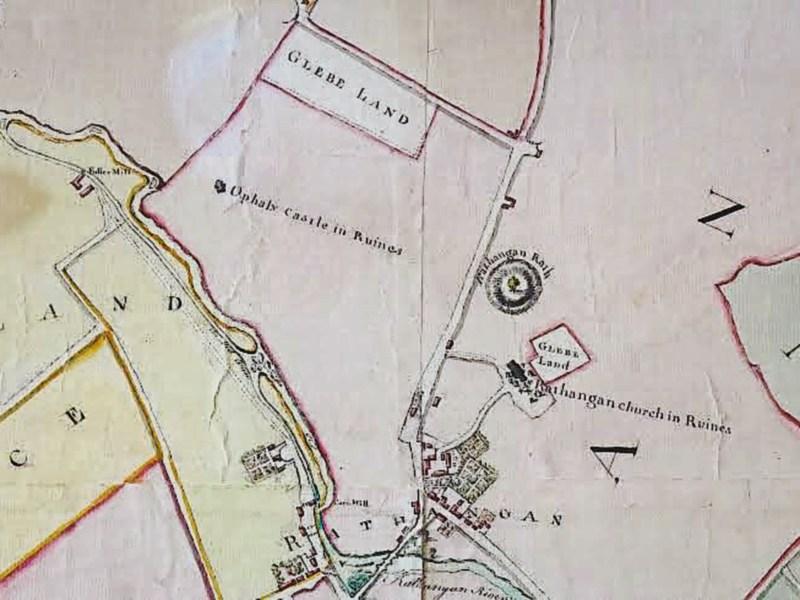 The castle site pictured on Rocque's map of 1760. Courtesy of John Byrne

Kildare County Council has insisted the developer behind a 72-house project in Rathangan carry out a magnetic survey to find medieval castle foundations.

The local authority also asked for details in relation to a pedestrian crossing to the health centre and boys school across the road.

Local historian Seamus Kelly has been campaigning for the castle foundations to be located and protected.

“I very much welcome the archaeological content of the further information request and I would be willing to meet with any archaeologist on site to share the content of my research,” he said.

Jack Kinsella has applied for permission for the development on the Bracknagh Road and has to respond to the council within six months.

An archaeological assessment had been submitted by the applicant in relation to Rathangan Castle. It proposed a conservation architect be hired to monitor topsoil removal and other ground works. It said if any discoveries are made, work should be stopped in the vicinity until various authorities were consulted.

However, Rathangan historian Mr Kelly, who also worked on the Wood Quay project in Dublin, pointed out the exact location of the castle is not known. He stressed he had nothing against the project but called for an architectural exploration followed by an excavation prior to building.

“We need to find the structures, preserve them as ruins and put a proper name plague up and let people go in and see them,” he said.

“It’s as much a part of Rathangan as the Rath and a core element of the Rathangan medieval and early medieval village along with the Church, which was where the Church of Ireland is today,” he added.

Kelly points out his research indicates it was founded in the 1300s and ceased to be lived in after 1598.