'Ray, you will be missed by many' - Newbridge bids farewell to businessman and politician Ray O'Brien 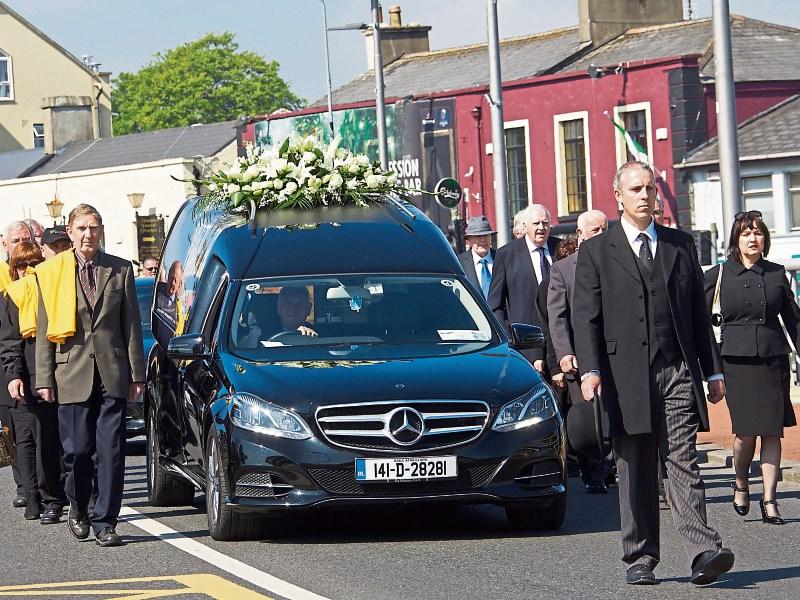 The father of four and car salesman passed away peacefully in the Hermitage Clinic, in Dublin on Friday, May 13 last.

The chief celebrant of the Mass was his brother-in-law, Fr Joseph Calvin, who began the service by remarking that Mr O’Brien enjoyed life and meeting new people. He raised smiles all round when he added ‘if Ray got to know you at all he would try to sell you a car’.

“That was Ray, he had a lovely personality and a certain charm,” Fr Calvin said.

He was remembered as being a great family man to his wife Jacinta and their four grown up children, Aileen, Deirdre, Colin and Shane.

“He put up a great fight thanks to the love and support of his family and very good friends. Ray you will be missed by many people.”

Ray went to the local Patrician Brothers Secondary School and, on leaving school, he became interested in cars. He joined the Junior Chamber of Commerce where he met his wife of 40 years, Jacinta from Westmeath, who was a bank official at the time.

“Both Ray and Jacinta worked hard to provide for their four children. They expanded the business, (Ray O’Brien Motors) and at one time employed 70 people. Then the Celtic Tiger died and sadly a lot of the work Ray and Jacinta did went by the board, yet Ray continued to enjoy life. He did not let it get him down.”

Mourners heard of Mr O’Brien’s deep faith that helped carry him through his struggles of life. He was the second youngest of eight children from the Barracks.

His daughter Aileen also spoke on behalf of the family and praised her late father’s wicked sense of humour, devotion to his grandchildren and his love of racing, politics and religion.

He was laid to rest at St Conleth’s Cemetery.

Tributes paid to the former businessman and Mayor of Newbridge Ray O’Brien recall his passion for the town of Newbridge, the twinning project with Bad Lippspringe in Germany. and his good sense of humour.

Mr O’Brien, who ran Ray O’Brien Motors, sat on several terms of Newbrige Town Council from the 1980s to 2001. He held the first title of Mayor of Newbridge in 2001.

He had a wide political career, leaving Fianna Fail in the 1980s to join the Progressive Democrats.

He later became an independent. He also served as a Town Commissioner.

He ran as an independent in the local elections in 2014 but failed to get reelected to the council.

Deputy Fiona O’Loughlin praised the late Mr O’Brien for his business acumen and the energy he gave Newbridge and the contribution he made to the development of the town as Kildare’s main shopping town.