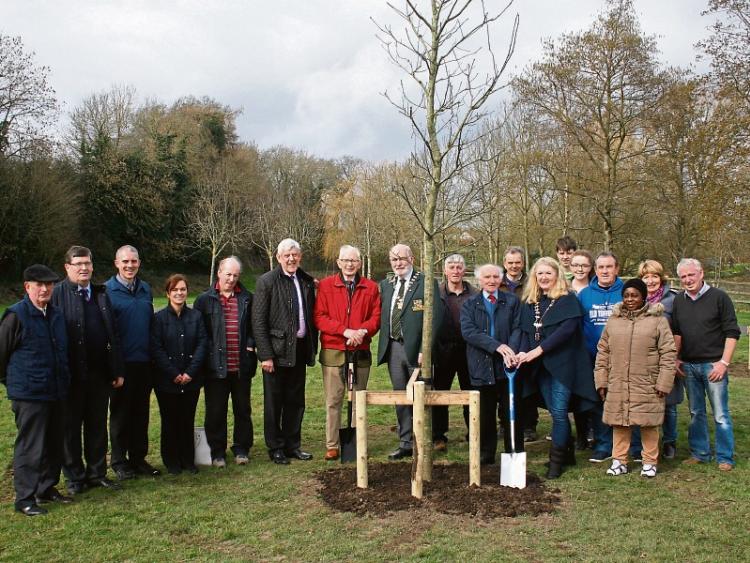 They say from little acorns, grow mighty Oak trees, and that is certainly the case for the Newbridge Kildare Lions Club.

Founded by the late Joe O’Loughlin of Hotel Keadeen, the late Dr. Tom Healy and Sean Keegan in 1976, little did they realise how the club would grow over the years. Current founder members still active in the club include John McLoughlin of McLoughlin Oil and Donal Shannon.

This year the club celebrated 40 years of service to the community by planting three Oak trees.

The three Oak trees, which are Irish red oaks, were selected by tree expert Paddy Gleeson, who informed the group that the Oak trees will grow for 300 years, mature for 300 hundred years, live a further 300 years and make a great contribution to the reduction of carbon emissions.

The tree planting ceremony was held in the Linear Park in Newbridge on Saturday March 12 and was completed with the assistance of Newbridge Tidy Towns Association.

Lions President Paula Keegan said; “There were several reasons for planting the trees, amongst them that all Lions clubs internationally had to complete an environmental project for the Centenary of Lions Club International which takes place in 2017.

So it was considered a great opportunity to do something tangible for the community and honour our founder members.”
A spokesperson added; “The year 2016 has been a good year for the Lions club so far ,as since last Christmas we have distributed over €12,000 worth of hampers and vouchers to families in need community.

“We will also be doing a hamper and voucher distribution for Easter. The Lions Club would like to thank everyone who has supported collections over the last 40 years, it is very much appreciated.”

Since club was founded, over €1.2m has been collected and distributed.  A unique feature about the Lions Club and its charitable work, is that every penny collected is redistributed amongst the community, all club expenses are paid by the members themselves.