20 years ago, Chris Evans' TFI Friday programme was at the centre of British pop culture and the heart of the hit TV show was ‘Andrew the Barman’ from Allen Cross 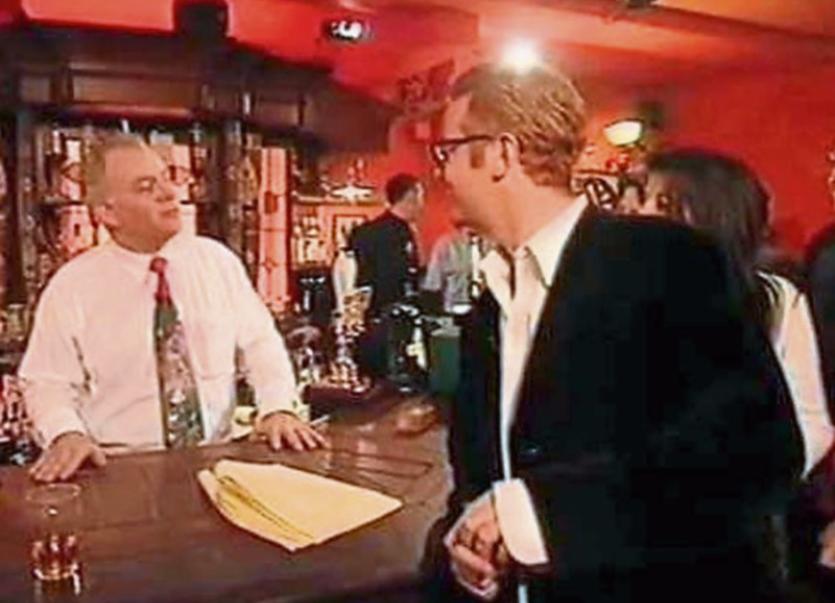 But stood behind the on-set bar that night was Andrew Carey from Allen Cross.

Carey now mischievously jokes that he appeared in more episodes than Evans, having arrived in London’s Euston Station more than 30 years before with “just the change in my pocket and the promise of bar work”.

His rise to win a place at the top table, or top bar counter, of British life was incremental, but in retirement, the Allen man can recount nights out with the Spice Girls, Paul McCartney and bizarre trips to Wembley with Chris Evans to collect a fully-togged-out Paul Gascoigne, after an England international.

So, many years before that night, Andrew Carey arrived in London.

He was 17 when he left Kildare and he recalls the moment of inspiration.

“I didn’t really like farming,” he says. “And I was reading the Irish Independent one day and there was an ad in paper: ‘Barman wanted in London pub, live-in, six pound a week.’

“I thought to myself: ‘hello, there’s a job a roof over my head and a wage in my pocket’ so I phoned the number, and spoke to the lady the other end.

“She was from Kilkenny. She said: ‘when can you start?’ I said: ‘tomorrow morning.’

“I had a suitcase which was about four foot by three foot by two foot, with nothing in it only a few dirty socks, shirts and underwear. I was hoping the customs man wouldn’t ask me to open the case.

“I bought the ticket at Holyhead. It was four pounds and ten shillings one way to Euston. I got on the boat, couldn’t afford to buy a tea or a coffee because I didn’t know if I would have enough money to get to my final destination.

“When got to Holyhead I took the train to Euston in London then handed the taxi-driver a piece of paper which said the Victoria 642 Wandsworth Road SW 8.

“I remember he wouldn’t take the Irish ten bob note. But there was a newsagents next door to the pub, which opened at five in the morning. He changed the five note. So that was it, I started in 1961 with one shilling.”

Carey knuckled down and learned his trade, building a career as a barman, and then a publican, before taking ownership of The Haverstock Arms in Belsize Park on the edge of Hampstead Heath in North London.

The pub became a landmark watering hole and the Haverstock’s gregarious owner unwittingly became the landlord of two then unknown, but rapidly rising stars — Chris Evans and Danny Baker.

“Chris came down from Warrington,” he recalls. “He lived around the corner from here and was getting going at the BBC and Capital Radio. They’d be in here on Saturday mornings when it was quiet, sketching ideas on toilet paper!

“There were quite a few celebrities drinking in the Haverstock then. Chris used to be ear-wigging at the bar from people like Ronnie Frazier, and writing things down.”

Carey didn’t know it then but these doodles on the pubs toilet paper were the roadmap for a new television show that would one day feature many of the best known names in the world of celebrity.

“Chris came up with name TFI Friday,” said Carey. “But they were still putting it together then. He was in the Haverstock one Saturday morning with Danny Baker and he said to me: ‘Andrew I’ve got it, we’ve done it! But there’s one problem.’

Recorded in the famed Riverside Studios in Hammersmith, TFI Friday became an overnight sensation and, while the Allen man was ever present, resplendent in shirt and tie behind the counter, he admits that too often he was left to curse himself after delivering the wrong lines.

“I was notorious for getting them wrong,” he laughs “Chris preferred it when I messed them up. It used to annoy me, but he always said: ‘it’s good for the show’.

If Riverside Studios was something of a playing pitch for the weekly broadcast, then Carey’s Haverstock Arms became something of a training ground and testing ground for Chris Evans and the world of celebrity that orbited North London.

Carey recalls: “I remember the Gallagher brothers from Oasis passing by one night. They heard music and came in. Someone handed one of them a guitar and next thing they were up and playing.”

Another night in the ‘90s, Chris Evan booked a bus from the Haverstock Arms to Wembley where England and Paul Gascoigne were playing a friendly international.

The bus was still parked on Haverstock Hill when the game kicked-off.

Evans pushed back the departure time, favouring pints over punctuality, it seemed, before suddenly rounding up a raiding party, that included Carey, and they arrived at the ground with 20 minutes to go.

And there in the dark of the night, Gascoigne was stood, after allegedly substituting himself at half-time.

With Gazza on board they did an about face on Wembley way and drove the mini-bus back to the Haverstock Arms.

On another occasion, Carey recalls the night Paul McCartney appeared on the show and brought a tie and a set of braces for him to wear behind the bar.

“And after the show, a glass of beer was spilled on the tie he had signed,” he says.

“But there would be an awful lot of good will for the show from a generation of celebrities. “From Bono to the Gallaghers and so on, it was a great time, a wonderful time.”