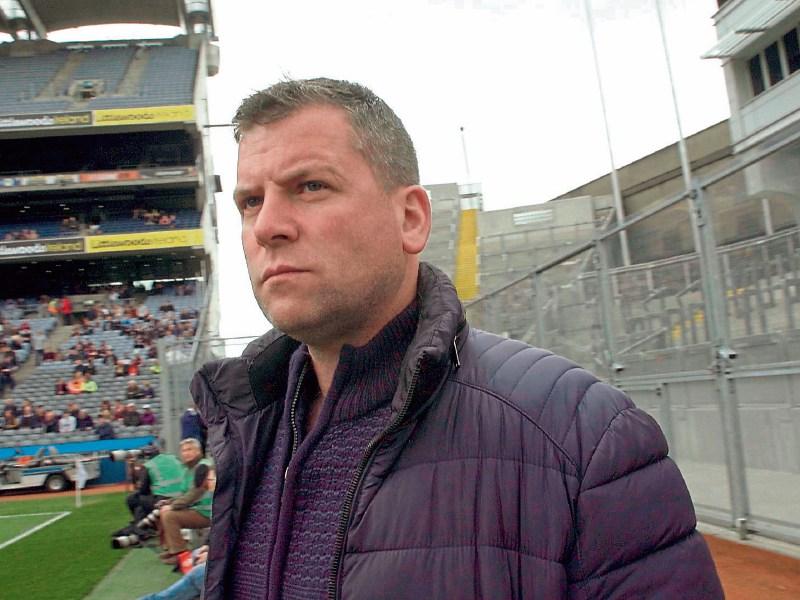 I worked on a radio programme recently about Tom Crean.

We needed to find someone to act out the voice of the famous Kerry explorer and very obviously that someone needed to be from Kerry.

The one-time star of the county’s football team who’s now a broadcaster with Raidió na Gaeltachta.

But it was a little peculiar to hear the ace-scorer perform exploration scenes full of giant waves and ice-bergs, when I knew him as the star forward who arrived in Croke Park in 1998 to terrorise the Kildare defence.

It’s almost 20 years since that never to be forgotten All Ireland semi-final and there’s something very familiar about, not only the Kildare team that took the field that August Sunday, but also the Kerry XV.

Maybe its the legacy of being in the Gaeltacht with the best friend of Mike Frank Russell, whose name he mentioned a zillion times.

Or how, in 1999, I watched a fellow Kildareman take on the Kerry captain Seamus Moynihan, in a tree-climbing contest after a night’s drinking in Sydney.

The degrees of separation are typically so few in Ireland that you’re never more than one step, or one branch in the case of Moynihan, away from the peddlars of great deeds.

But ahead of the semi-final in ’98, a gang us loaded up the car for a trip to Dingle in the Kerry heartland.

On the journey’s final leg we stopped in Falvey’s in Annascaul, a bathroom-sized bar with a white pebble dash exterior and red trim.

“You’ve got the teacher up with ye now,” said the older bar woman, referring to Kildare player Karl O’Dwyer who had made a high profile defection from the Kingdom.

“And do you know what?” she said, standing the drinks on the counter. “Kerry probably have a bit of homework to do alright.”

When we got back from Kerry it was just in time for breakfast. This had become an event in itself that summer.

I can’t remember how it started, but in ever-increasing numbers, people began calling to the house for breakfast on the mornings of Kildare matches.

In the sitting room Bryan Murphy’s winning goal against Meath in the Leinster final ran on loop and in the kitchen, we struggled to find a diplomatic solution to the problem of having too few sausages.

Then we stood on the Hill.

At least that’s what it looked like from the middle of a snowdrift of white jerseys that ran up from the bottom corner of the Hogan Stand, past the Nally and on towards the Cusack.

We’d heard Nuckser Buckley was injured, but in a cruel dupe, he lined up for the photograph and then ran under the stand, never to be seen again.

In his place, the more slightly built Dermot Early started at midfield against future hall of famer Darragh Ó Sé.

I don’t mean the difference in stature. It was more because it didn't feel that long since Early lined out at centre-field for the Patrician College in Newbridge.

I watched through the sun, my hand fixed visor-like above my eyes for the duration.

But I can still see clearly ‘the teacher’ grabbing the ball around midfield and floating this enormous point into the middle of the Hill.

Meanwhile, over in the corner, Brian Lacey wrestled and fought Kerry’s main threat Maurice Fitzgerald in a sideshow that looked completely separate to the game.

If you’ve ever been to a children’s match and seen two substitutes totally oblivious to everything outside their own personal duel on the sideline, then that’s what it looked like.

Read also: Robert Mulhern - the stereotype of England we were raised with doesn't exist any more

They almost certainly missed Eddie McCormack and Martin Lynch sweeping over some super scores, before Lacy did let Fitzgerald off the leash to point.

When the Kerry garda Johnny Crowley rippled Christy Byrne’s net down the Canal End, a huge gasp of oxygen escaped from the Hill.

It felt like shades of Ollie Murphy who had done the same for Meath down the same end, 12 months earlier, but in the rain.

Shortly after, the whistle blew and we poured down from the terraces to the railings, desperate to get on the pitch and so determined not to be denied the stewards decided it was a problem above their pay grade.

They just opened the gates.

But after some hand-shaking and back-slapping, I remember feeling a bit like the dog who’d caught the car.

It was difficult to know what to do next before realising the summer exploration into unchartered waters was about to move onto the final and Galway.

Minus Dara Ó Cinnéide of course.

Naas man Robert Mulhern is a London and Dublin based journalist contracted to RTE's The Documentary on One. To contact him, email mulhernrobert@hotmail.com