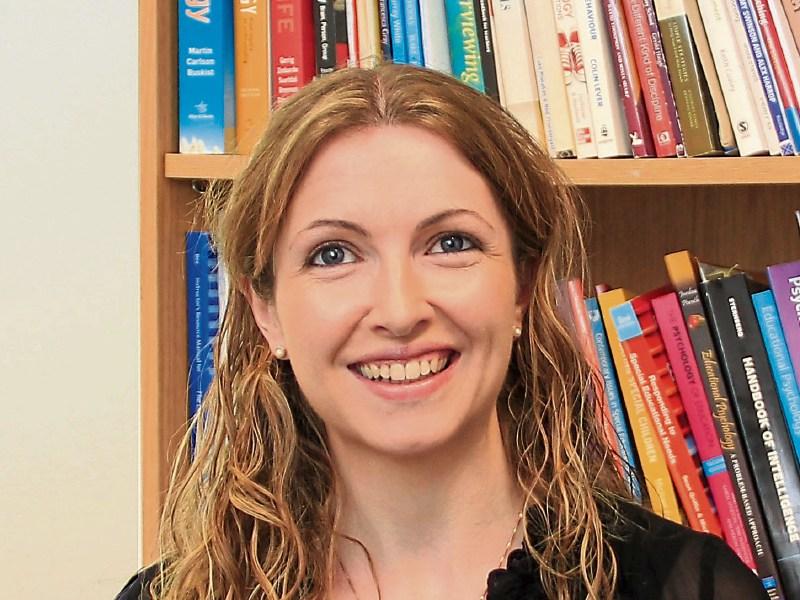 The experience of being at home during the Covid-19 lockdowns of the past two years was like a ‘pressure cooker’ for some children unfortunate enough to experience domestic violence or alcohol abuse in the home.

That is according to Maynooth University (MU) academic researcher Dr Catriona O’ Toole, an expert in the effects of childhood trauma.

Dr O’ Toole, who has a background in psychology and helping troubled youths, recently led a seminar titled ‘Where the Light Enters: Hope And Healing Through Trauma-Informed Education’ at MU.

In the seminar, she pointed to the fact that, internationally, it is estimated that roughly 60 per cent of children have had exposure to some type of traumatic event in their lives.

She added that available data within Ireland also shows that exposure to adversity is “a reality for far too many children”.

Dr O’ Toole recently discussed with the Leinster Leader her knowledge about how trauma can have such a strong hold in a young person’s life; the symptoms of trauma, and the things that adults should keep in mind in order to help young people going through distress.

She explained that there are typically two forms of trauma treatment: trauma specific practice, which refers to the more clinical process of resolving trauma; and trauma informed practice, which is less about healing and instead focuses more on recognising reactions that originate from trauma, such as a child “acting out”.

“While there is no single, definite consensus on the definition of trauma, there are two main forms of trauma.

“The first type would be single incident trauma, which typically occurs after a frightening event (such as a car-crash or a natural disaster).

“The other type is fundamental betrayal, which typically involves a repeated breach of the child’s trust. The latter also usually results in more wide-ranging impacts on the child,” she added.

She added: “Language can make a big difference; it is important that it is carefully selected and is appropriate in order to eliminate stigma.”

Dr O’Toole said that children are usually more prone to flight-or-flight responses, while adults generally have more opportunities to maintain control or at least have greater cognitive recognition of their surroundings.

She elaborated: “Trauma involves the body, not the mind; for example, when my mother died, I remembered the aroma of a bunch of nearby flowers.

“One year later, I was walking down a street and smelled that same aroma, and it took me back to my mother’s funeral... triggers work in the same way.”

In terms of the effects that the pandemic has had on young people, she agreed that, especially in households where domestic violence is present, the home, which was meant to be a sanctuary during lockdown, was instead often the worst place to be for these children.

This was backed up by Alcohol Aware Ireland, which reported that Ireland saw significant rises in the level of home drinking.

In addition, gardai noted a 20 per cent increase in reports of domestic violence, between April and August of 2020.

Dr O’Toole commented that she would compare such volatile situations to being akin to the being inside a “pressure cooker.”

As for what changes she would like to see implemented in Irish society, she said that she would support more “trauma-informed approaches and programmes” in schools.

She pointed to similar systems in Scotland as an example: “Over there, they ensure that all professionals in the civil service are trauma-aware.”

“I would definitely like to see trauma awareness and acknowledgement to be brought in on a government policy level,” she added.

Commenting on what can bring on trauma, Dr O’ Toole said that trauma is more like a broad picture rather than a narrow, one-answer solution: instigating factors can range from discrimination to class to alcohol abuse and societal expectations surrounding, for example, gender or sexual orientation.

Dr O’ Toole pointed to the CDC-Kaiser Permanente ACE (Adverse Childhood Experiences) study from the mid-1990s as an example of this fact.

She stressed that it is also important to realise that children should not be labelled liberally, as “often times, they are reacting in normal ways, given their circumstances”.

“The feeling of being ‘different’ can often also lead to discrimination; in the case of Ireland, we can see that this is so visible in the Irish Travelling community.

“Intergenerational trauma, such as high suicide rates, can also be seen in the Irish Travelling community, who are marginalised.”

As for what parents and guardians can do to recognise signs of trauma, Dr O’ Toole noted a wide variety of symptoms can occur in a distressed child or adolescent.

These can include: bedwetting, nightmares, sleep problems, school refusals or dropouts, intrusive thoughts, neediness, extreme emotional responses, or conversely, an appearance of being numb, or “dissociated”, as sometimes it can be too painful for the child to be in the present.

“For young people, please reach out to a trusted adult, whether they be a parent, a teacher, a guidance counsellor, or a youth group such as Jigsaw or SpunOut.

“As for adults, please don’t be afraid to ‘reach in’ to any child or adolescent you may feel is undergoing something serious.”

She continued: “You don’t have to be a medical expert; a lot of the time, it’s just about listening to the young person and making them feel that they are validated.

“Children usually respond well to common, repeated interactions; these can help create a human connection and let them know that they do matter, and that someone does care about them.

“It is important to challenge the negative beliefs they may have about other people, as well as themselves.”

She concluded: “It’s also important we as a society are trauma-aware, and that we can know where certain behaviours are actually coming from.”