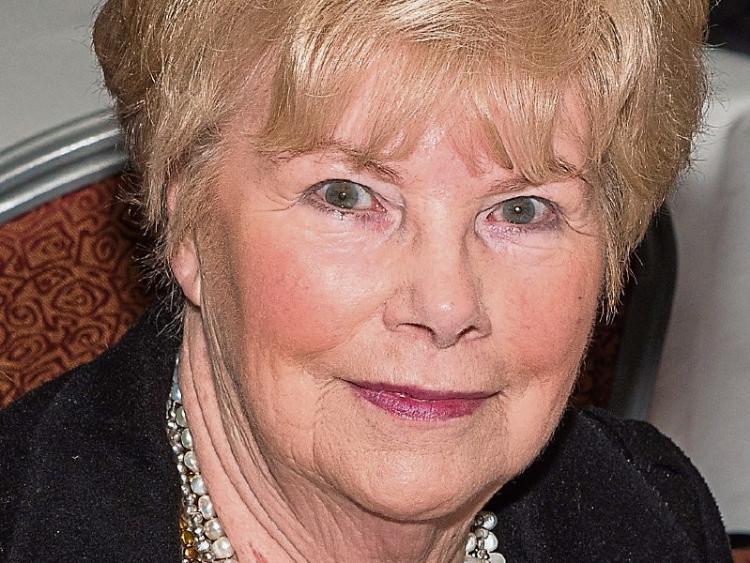 An inspirational lady and a real leader. That was just one of the many descriptions of the late Evelyn McKee, founding member of the Little Way Cancer Support Service, who passed away on March 25 last.

The words from Noel Shannon, former Kfm radio presenter, sum up her character.

Noel recalled working with her in promoting the Robertstown Canal Hotel and the annual fundraising Valentine Balls in the late 2000’s.

Evelyn, who had just turned 80, was instrumental in setting up the Little Way Cancer Support service in Clane. She was laid to rest in Derrinturn.

A well known and much liked figure in Kildare, reflected in many tributes on www.rip.ie, she was nominated for the Kildare Person of the Year Award in 2008 and in 2015 received the Claonadh Award from Clane Community Council for her outstanding work with Little Way.

At her funeral mass in Derrinturn on Sunday, March 28, tributes were paid to her by her friends from the Kildare Irish Countrywomen’s Association, its current president, Nellie Dillon and its current minutes secretary, Norah McDermott.

Evelyn, the daughter of Anna Marie and Andrew Baker, was originally from Whitehall in Dublin.

When she married Michael McKee, a teacher who became principal of Ticknevin primary school, they moved to county Kildare in the early 70s. They lived in Rathcoffey before moving to Carbury in 1979.

Evelyn started her career in Roches Stores but was a lady who had great entrepreneurial spirit and had many strings to her bow that involved her passions; singing, floristry, beautician, village grocery shops, and the one-stop-shop Anna Marie bridal boutique in Edenderry.

She was a freelance beauty consultant and in the late 80s was known for providing the latest beauty tips, doing work with the ICA at its centre An Grianan.

A member of the Derrinturn church choir, she was well known as a singer, taking part in many musicals and appearing at many weddings and funerals across Edenderry and west Kildare but also right across the country. Elaine Page was a favourite singer of Evelyn’s.

She won the M’Lady Eireann competition, honouring women for their local community work, in 1998 and went about establishing her vision of setting up a cancer support centre in Kildare.

One of her first fundraising initiatives was the recording of a CD which was sold far and wide across the country.

Thereafter it was her devotion and determination through her friends and supporters that the Little Way Cancer Support Centre opened its doors in October 2003.

Evelyn became ill and succumbed eventually to cancer herself.

At her funeral mass, Fr John Fitzpatrick, who was accompanied by Fr Paul Boyle, Clane, said there were a huge number of little stories about her. Her care for others extended far and wide. “She gave lots of things to lots of people.”

Fr Fitzpatrick said that she was a great singer who had a love for St Therese of Lisieux, the Little Flower of Jesus.

He described her as Ireland’s Gloria Hunniford.

“In dealing with Evelyn, you knew she always expected the best.

Evelyn was very well cared for in Maynooth Lodge Nursing Home in her final days.

Her son, Anton, recalled that regarding her life and volunteer work: “The tyres of her car were seldom cool. No matter what the weather was like, she would be on the road to her friends.”

He recalled being in the car with her on many trips over Ticknevin Bridge — ‘that damned bridge’ — going like a racing driver on the approach to it, the engine revving and then sputtering and the car rolling backwards towards the canal. “I just knew my ma would stop it in time,” he said.

“She taught us never to give up and have faith in our abilities. We are so proud of you who taught us to try everything and never give up.”

Evelyn’s daughter, Dearbhail, said the family were grateful and thankful for the support from everyone, from the ICA and the Tyrrell family. “Her life and love will be with us all,” she said.

Dearbhail said: “She was a great mother, and her devotion was threefold, her family, her faith and to the community, in particular the Little Way Cancer Support Centre, and it is envisaged her legacy will continue.”

At her funeral mass, Kildare ICA Federation President, Nellie Dillon, said she first met Evelyn 40 odd years ago and had vivid memories of going to her house and seeing loads of little children running around. Today those children are adults and a wonderful legacy.

She was ‘recycled’ many times because she didn’t say no. She had an amazing capacity to give of herself.

Nellie said herself and her dear friend, Norah (McDermott) travelled the country on behalf of the ICA.

Nellie said that around 15 years she was at a painting class in Clane when she got a call from Evelyn, who would not stop talking, basically seeking help to set up the Little Way Cancer Support Service.

“She had a great faith in St Therese and when we were low on funds she would keep calm and say St Therese would provide.”

Nellie said Evelyn was so proud of her family. “As you lay your amazing mother to rest, may her gentle soul rest in peace,” she concluded.

Norah McDermott said she and Evelyn went back well over 30 years.

She also recalled them calling to many cancer care centres as they prepared to set up the Little Way. “I knew I was in for the long haul,” said Nora.

Her idea was to set up a centre in Kildare because there was none. “Evelyn was kind and gentle but very determined. When she got an idea, it happened.”

She recalled the “pink tank” project when a farmer loaned her a rusty tank taken out of a field surrounded by nettles which was then painted pink. “I looked at Evelyn initially and said this is not going to happen. Evelyn said ‘it will’ and I was getting lads to paint it. We had it for a week. The words ‘no’ and ‘can’t’ were not in Evelyn’s vocabulary.”

Norah said so many people went through the Little Way door.

She extended her sympathies to Evelyn’s family on behalf of the Little Way.

Norah concluded: “I have lost a very dear friend. A woman of great faith. I will greatly miss her phone calls. Little did we know that last Monday’s phone call would be our last.”

At Clane Community Council's March meeting council members were saddened to learn of Evelyn's passing. They recalled in glowing terms her wonderful spirit, kindness, and generosity.

Des Drumm, who was chairperson in 2015, said it was the council’s privilege to publicly present Evelyn with the Claonadh Award on behalf of a most grateful community back in 2015, and her name adorns our honour board in the Abbey Community Centre.

Little Way was set up in 4 Woods Way in Clane, operating on a drop-in basis.

They trained volunteers to staff it but also had two therapists and three paid professional counsellors.

She is predeceased by her brother Christy.