Kildare's Wildlife Watch: Have you seen the Marsh Fritillary this year? 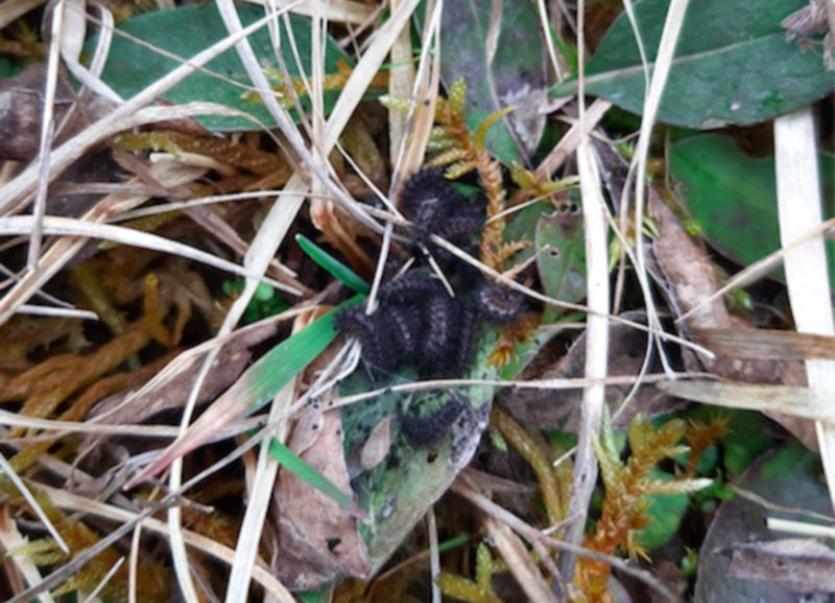 The Marsh Fritillary (Fritileán Réisc as Gaeilge) butterfly is an Annex II species. This means it is one of the few butterfly species in Ireland that is protected. In 2013 a review of the status of this butterfly identified its populations as inadequate and in decline.

Annually, this butterfly can be observed on the wing in flight between May and June each year. However, it is at this time of year we can assess the populations for the coming season as the tiny caterpillars born last autumn that overwintered in a larval web are emerging from their winter hibernation and can be observed feeding on their food plant Devil’s Bit Scabious (odhrach bhallach as Gaeilge).

The caterpillars at this time of year are small, black in colour and have spikes covering their bodies to deter predators. It is believed that the black colour of the caterpillar enables them to absorb solar radiation, allowing them to become active early in the year in relatively cold conditions, as they can attain body temperatures well above ambient values.

During the early spring, the larvae live in small groups. The larvae eventually disperse to live individually, prior to pupation, about the end of April. The pupa is white in colour with orange and black spots while the adult butterfly that emerges is brightly coloured with black, orange and white markings.

Although the populations are considered in decline, many groups and individuals are working to protect the species on this island.

Annually, all around Ireland, citizen scientists would be watching for this tiny caterpillar in their community — however, with travel restrictions in 2021, many cannot complete the spring Marsh Fritillary nest survey.

Their food plant, Devil’s Bit Scabious, is typically found growing in grassland habitat. So as the weather is brighter these days, if you are aware of the Marsh Fritillary in your local area, become a citizen scientist by identifying a spring caterpillar nest and submitting your record to the National Biodiversity Data centre.

If you come across a wildlife species that you would like help identifying I would be happy to help. Contact me at bogs@ipcc.ie.