Kildare history: St David’s Castle has long been at the heart ‘Naas of the Kings’ 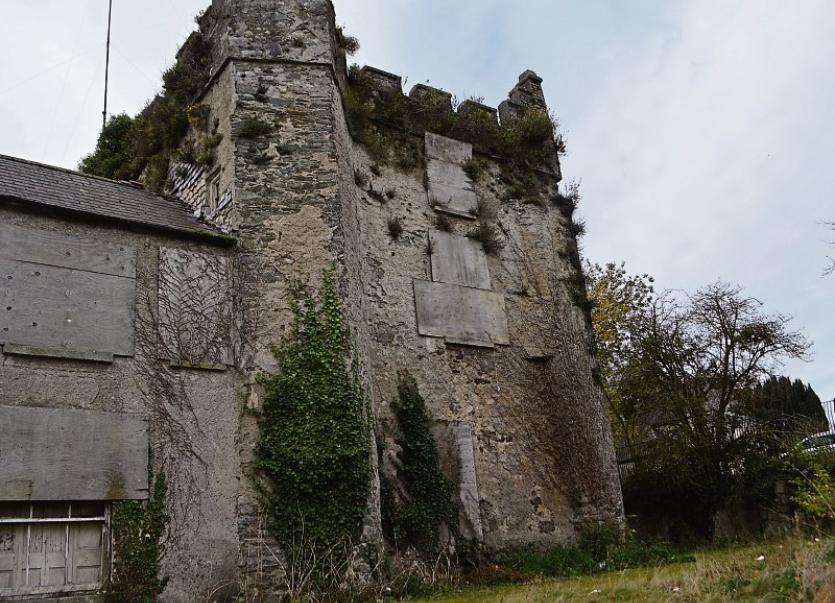 Dubliners, philosophic about long-waits at bus-stops, were wont to quote the old saw “you don’t see a bus for ages, and then a clatter of them comes along at the same time.” It seemed a bit like that in Naas in the third week of November when the fate of two quite distinct town-centre building projects, abandoned for years, changed in a matter of hours.

When your town is highlighted on RTÉ radio’s Morning Ireland it is rarely good news. But nested within the business slot of the national broadcaster’s flagship programme was an announcement heralding the renewal of the Naas Shopping Centre development bounded by the narrow Church Lane.

And then — not seventy-two hours later — news broke that St David’s Castle, just across the same lane from the shopping centre, had been purchased by a new owner following a decade of vacancy and vulnerability to the elements.

After years of bewilderment and frustration, it seemed wonderfully coincidental that breakthroughs should occur within hours of each other for two buildings which, although entirely unconnected, are separated only by the width of a medieval cartway.

As regards the shopping centre, the recollection of the high yellow cranes and their long jibs seeming like the figures of mourners with their arms extended in pathos over the concrete sarcophagus of the Celtic Tiger will remain vivid for a time to come.

While the centre — or whatever ‘mixed use’ development emerges — is the remit of the news department of this journal, the castle story deserves some context for its place in the historic urban fabric at the town’s core.

In truth, the castle is a building project that began at least six hundred years ago and never stopped, with extensions and unfortunate adornments added over the years.

The best dating for the castle’s fabric indicates the mid-1400s when it was one of the castles that emerged to guard the Pale — a name which referred to both a defensive double-ditch and the region of English government extending out about 20 miles from Dublin Castle.

The current castle may incorporate the stone of an earlier tower dating from the visit by King John to Naas in 1210 to hold a parliament. Two centuries later, another English king, Henry V, granted a charter to the new corporation of Naas to charge tolls.

This income was to finance defensive walls and castles for the town — a project which may have included the reconstruction of the old ‘King John’s castle’ into the structure known in modern times as St David’s castle. Annexes in the 18th and 19th centuries to accommodate a squire’s house and a rectory gave the building its current profile.

The castle was not the only fortified dwelling in the town in the later middle ages. And it may not even have been the largest. There is reference to a large stone house, known as White’s Castle, on the site of the Town Hall (soon to be the library returning to its original 1904 home).

This, in turn, was one of eight castles for which there is mention in old records. A fragment of Eustace castle stood on Friary Road just to the east of Lawlor’s Hotel until the early 1970s. Other castles mentioned include Watergate castle, named after the stream once exposed near Poplar Square and Black Castle, close to the current Sherry Fitzgerald O’Reilly premises.

Alas, little or no hard evidence of these buildings has been uncovered despite much excavation in the town centre. The same can be said of the walls and gates which, according to urban archaeologists, encircled the town, although these may have been as much customs barriers and toll gates as robust defensive murals.

It seems that the castles and walls were later obliterated to make way for a new and wider streetscape.

The word ‘castle’ in its early context referred simply to a strong stone house rather than the modern imagery of a fortress with towers and battlements. Ironically, the battlements on St David’s are relatively modern concrete adornments.

While not exceptional in terms of size or fortification, the castle occupied rising ground on a compact hill site and together with St David’s church formed the core of a small settlement. It was prominent among several castles to bolster the Pale defences which, within Co Kildare, were aligned from Kilcock through Clane to Naas, south to Ballymore Eustace, and then turned sharply north towards Rathmore along the line of the Kildare-Wicklow foothills.

Remnants of the Pale, locally named ‘the rampart’, are pointed out west of Clane, while traces of a similar double-ditch were found above Kilteel.

By the time the castle was rebuilt in the 15th century, Naas had lost its commanding status. The lustre of royalty which had put the ‘king’ into ‘Nás na Ríogh’ or ‘Naas of the Kings’ in Celtic times was long gone.

Other than straddling the main road to the south, the town had no more importance than that of a market town. It had long ceded baronial power in the county to Maynooth, where the mighty FitzGeralds ruled from their bastion. Nor was Naas the most populous or prosperous town in Kildare, with Athy rivalling it under both headings — again thanks to the FitzGeralds who had endowed the Barrow-side town.

Perhaps unsurprisingly there is little account of knights and ladies inhabiting the castle’s three stories — if they ever did — nor is there evidence of it being at the centre of battle or siege.

Certainly, by 1577, when raiding Irish chieftains devastated the town, the castle was redundant in offering protection to terrified inhabitants.

Whatever about the absence of record for its earlier occupants, there is no shortage of material available on its latest — to date — resident.

Dr Jack Gibson, Kildare County Surgeon, was its occupant for some two decades prior to his passing in 2005. A brilliant physician — the youngest fellow of the Royal College of Surgeons of Ireland in his day — he was also unconventional, pioneering hypnotism as a therapy for ailments and addictions and preceding the modern devotion to wellness and mindfulness by many years.

He deployed the technology of his time — the tape recorder — to make tapes for counselling and therapy particularly popular with those trying to quit smoking. The dense walls of the lower vaulted room provided ideal sound insulation for his recording enterprises — a use which their original builders could never have imagined.

Dr Gibson was predeceased by his only child Rosemary in 1997. His late daughter had a unique job description — she was the only professional female clown in these islands, performing under the stage name of ‘Rosie Gibb’. The castle was sold on after his death, but it was not reoccupied as a home and it became vulnerable to deterioration.

More than a decade later there is news that it has been purchased for restoration as a residence. Perhaps the best solution to ensuring its preservation is a conscientious owner who appreciates that a castle is not just for Christmas but for a lifetime.

And it would seem that the acquisition came in the nick of time. A report by a conservation specialist following an external survey raised concerns about its condition. Water penetration, tree damage and a failing roof were signalled as threats even if it is possible that the core structure is sound.

It will represent a landmark renewal of the moribund land to the east of the town centre if both the 15th century St David’s Castle and its 21st century neighbour, the ‘shopping centre’, are restored and progressed in tandem over the next couple of years.

One thing is certain, that in the tortuous run of both stories the penultimate week of November 2020, will be remembered as the time when — after years of delay and with extraordinary coincidence — the metaphorical ‘Naas buses’ arrived together in the form of hopeful news for two landmark town-centre buildings.