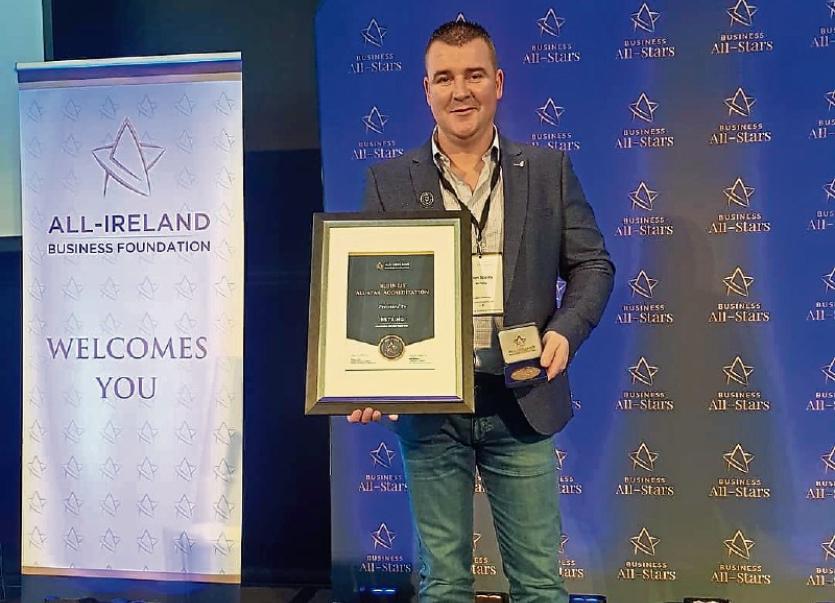 Brian Stacey at Croke Park after receiving his award

Naas entrepreneur Brian Stacey has been honoured for meeting the highest standards of services and trust in his industry.

Contractors BS Tiling is owned by Mr Stacey, who started out in business by himself and now employs 18 people, making him one of the biggest tiling contractors in Ireland . A native of Lacken View, he attended the CBS primary school and St Patrick’s Community College. Mr Stacey set up the business, based at Aylmer Park, in 1999 an d survived the economic collapse. He has worked on many major contracts including at Croke Park, Citywest, the Conrad and Maldron hotels, the redevelopment of the Curragh racecourse and many housing developments.

He also has worked for many well known contractors such as Elliot Group and Sisk Group.

His was one of three local companies to achieve the All-Ireland Business All-Star accreditation, an independently verified standard mark for indigenous businesses, based on rigorous selection criteria.

Two other County Kildare companies were honoured — Clane’s Pop-Up Races, which manages athletic events and Maynooth catering company Cater Waiter. The accreditation is overseen by the All-Ireland Business Foundation, whose judging panel is chaired by Dr Briga Hynes of the Kemmy Business School at the University of Limerick and Kieran Ring, CEO of the Global Institute of Logistics.

Dr Hynes said the accreditation, now held by 300 firms, is needed by small and medium businesses which operate to their own standards and follows a thorough evaluation.