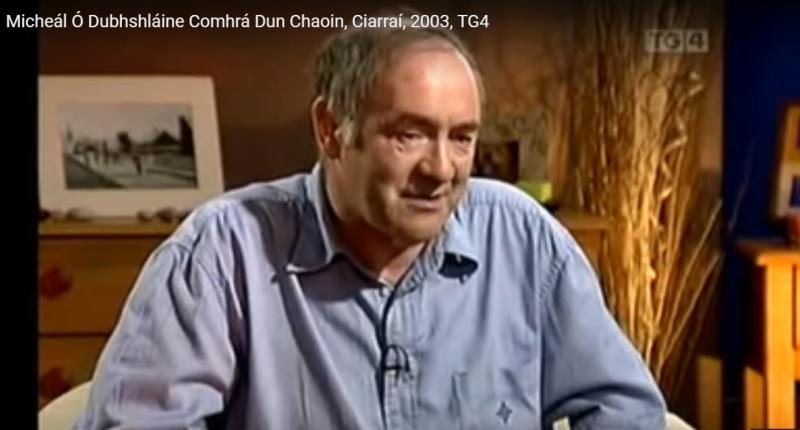 A still of Micheál Ó Dubhshláine (Michael Delaney) taken from a 2003 TG4 documentary.

The latest recipient of a Made of Athy plaque this coming Saturday, March 16 is Micheál Ó Dubhshláine, the town’s most successful writer in the Irish language and one of its great historians.
His song, the Famous Fair Town of Athy, will be particularly celebrated at the 4.30pm unveiling.

In his day he wrote many books ranging in subjects from the Blaskets to a history of Kilkea.
During his life, he became the subject of national headlines when he became embroiled in an argument with the Department of Education over the closure of a rural Irish speaking school.

He was the former principal of Scoil Náisiúnta Naomh Gobnait, Dún Chaoin, and was at the centre of a local controversy that became a national issue.

He began teaching there in an unofficial capacity after the government closed the school in 1970 and moved it to Ballyferriter against the wishes of the community.

The Made of Athy project honours those who have a link to both the music industry and Athy, and has celebrated noted musicians such as Neil Hannon of the Divine Comedy and Johnny Marr from the Smiths.