Made of Athy plaque unveiled on singer's mother's birthday 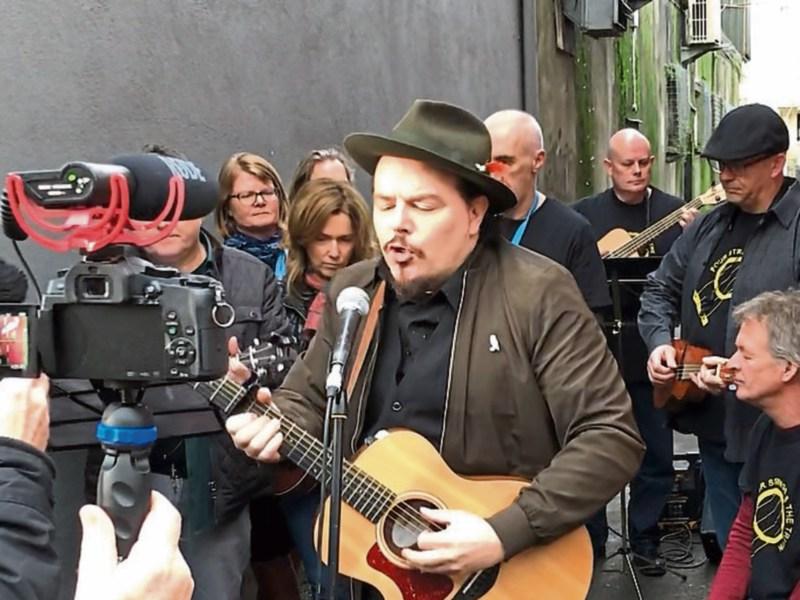 It was an emotional moment from Athy’s  Jack L who was honoured with a plaque in his home town commemorating his local, national and international success as a musical artist.

The plaque was unveiled in the town’s Garter Lane, as part of the Made of Athy project, which seeks to commemorate the town’s links with prominent people in the music industry.

Speaking at the unveiling, which was attended by a large crowd of more than 100, Jack L said it was an honour and a privilege.

“I can’t believe you all  came out here. We’re stopping the traffic in Athy.

“It’s a happy day for me and my family - a great honour.

“I was born in the hospital up the road, so I’m born and bred Athy. My grandfather Jack Keogh drove the ambulances.

He stopped momentarily and noted: “You know, it’s pretty emotional. I’m looking out at all the faces.”

“As an artist you’re open to sensibilities and things,” he joked

He thanked the committee for putting Athy on the map, and for putting all the good things about Athy.

He spoke of Garter Lane and his memories of it as a school boy, and before singing the famous song of the same name, he paid tribute to his parents, Sean and Rose and lead the crowd in a rendition of Happy Birthday for his mother.

“It’s a huge day for the Lukeman family. We’re hear today to celebrate the Jack, but we should also commemorate his father Sean and his brothers and sisters for what they have done for music is the town,” said local councillor Aoife Breslin.

“I’m one or two years older that Jack. I remember him in school up and down the streets. He always had an air about him, an air that he was going to do well.”

And she paid tribute to Iontas Ogra in Athy.

Former recipients of plaques as part of the Made of Athy project have included Johnny Marr of the Smiths, Mani of the Stone Roses and producer Bill Hughes.

It is a small project that has, as  Kildre County Arts Officer Luccina Russel put it, “has really really gathered momentum. “It’s something that has turned into quite an emotional project because it meant an awful lot to people.”