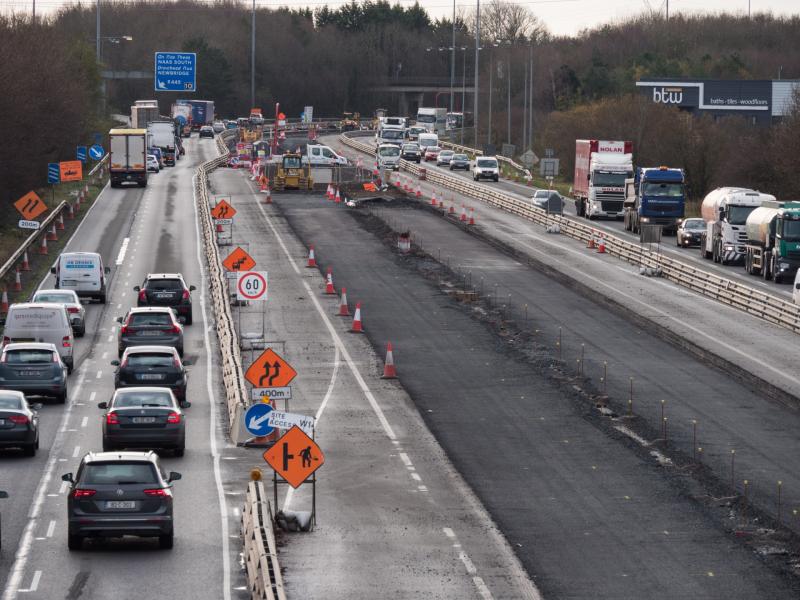 The end is sight for the M7 works but future construction of transport infrastructure must be 24/7, says Kildare Fine Gael Senator, Anthony Lawlor.

Read also:  Pedestrian safety needs to be improved in Ballymore

The roadworks will be finished by April but Sen Lawlor says all future transport projects should be worked on 24/7 to ensure they are completed sooner.

Sen Lawlor says he was pleased to hear confirmation today, Thursday January 10 from Kildare County Council that the project will be completed in the coming months.

Widening the existing M7 motorway – one of the country’s busiest roads - from two lanes to three lanes for 14km, between Junction 9 Naas North and the M7/M9 interchange at Junction 11, began more than 12 months ago.

A strict 60km speed limit is currently in force along the site with speed check vans regularly parked there.

Sen Lawlor says regarding future transport projects, it must be agreed beforehand by those putting tenders together, that such schemes will be completed in the fastest possible time to the ultimate benefit of road users.

“When it comes to planning of major public transport infrastructure projects, a common issue at the tender stage is a failure to identify all relevant costs and benefits," he said.

“Specifically, public transport infrastructure projects should include a cost-benefit of incremental completion dates with a bias towards earlier completion of the project. Thankfully the end game is in sight for the M7 works and the Sallins bypass and it will be completed within the agreed time frame. However we live in an age when construction can be carried out 24 hours a day, seven days a week. This should be the case for all future transport projects where it is permissible.

“The planning of public transport infrastructure must include a greater emphasis on the cost-benefit analysis of shorter construction timeframes,” Sen Lawlor says.

While construction works take place on the M7 during weekdays, they are significantly reduced at weekends.

Sen Lawlor said if roadworks, and the associated effects of noise and traffic do not impact negatively on residential areas or the immediate environment, project managers must look at continuous construction on transport sites.

“The transport network is important in facilitating and supporting economic growth in the national, regional and local economy. Prolonged construction times must be avoided. We need to minimize the economic, social and environmental impacts of major road and rail transport projects during construction," he added.

"While this may negatively impact on construction costs, the social, economic and environmental benefits are potentially huge. For example, the cost of congestion during construction of major road building projects should be considered and should influence the planning and tendering process. The annual cost of time lost on Irish roads due to congestion in 2012 was €358 million (Department of Transport). That annual cost will rise to €2.08 billion in 2033.

“Safety and quality are of course paramount in public infrastructure but the delivery time for projects must inform all stages of the planning, tendering and project management process.  Increasing the productivity of construction sites with contract incentives are part of the solution to earlier completion of major projects."