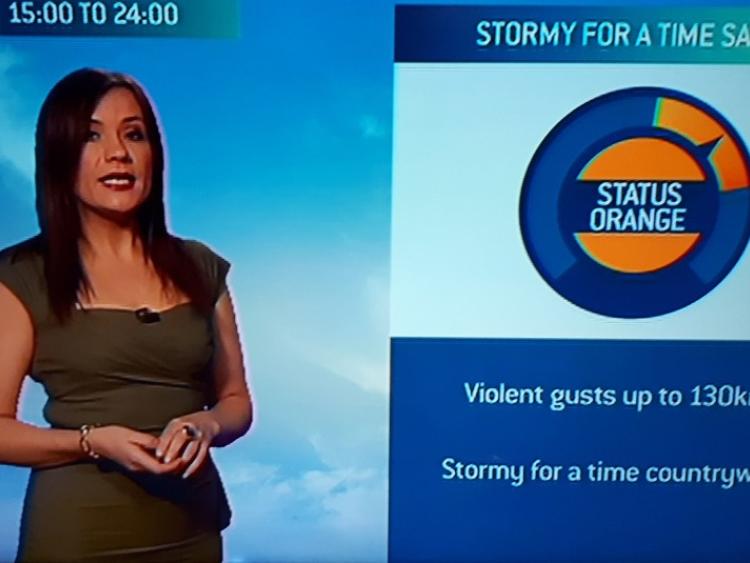 Met Éireann has upgraded its weather alert to Status Orange and announced that Storm Deirdre is to sweep the country this weekend.

After indicating that the alert would be raised, the forecaster tweeted that it had raised its warning level for the entire country late Friday night.

The forecaster says the developing depression (Storm Deirdre) will track northeast over Ireland during Saturday afternoon and evening and will bring wet and windy weather to all areas.

It warns that the west or northwest winds will reach mean speeds of 65km/h with gusts of 100km/h generally, with disruptive and damaging gusts to 130km/h likely for a few hours in western and southern counties in the late afternoon and transferring eastwards during the evening.

The Status Orange warning was issued at 10pm on Friday, December 14. It is valid from 3pm to almost midnight on Saturday, December 15.

A Status Orange wind warning has been issued.

A Status Yellow rainfall warning for Ireland is also in place. Met Éireann is warning of heavy rain during Saturday will lead to accumulations of 30 to 50mm with some mountainous areas exceeding these limits.

This warning is valid from just after midnight Saturday to 11.59pm.

A Status Yellow wind warning is in place for for Dublin, Louth, Wexford, Wicklow, Meath, Donegal, Cork and Waterford. The warning is for southeast winds will reach mean speeds 55 to 65km/h with gusts to 100km/h.

It is valid from 3am to 6pm Saturday.

While conditions are expected to ease on Sunday another bout of heavy rain is on the horizon for Monday.