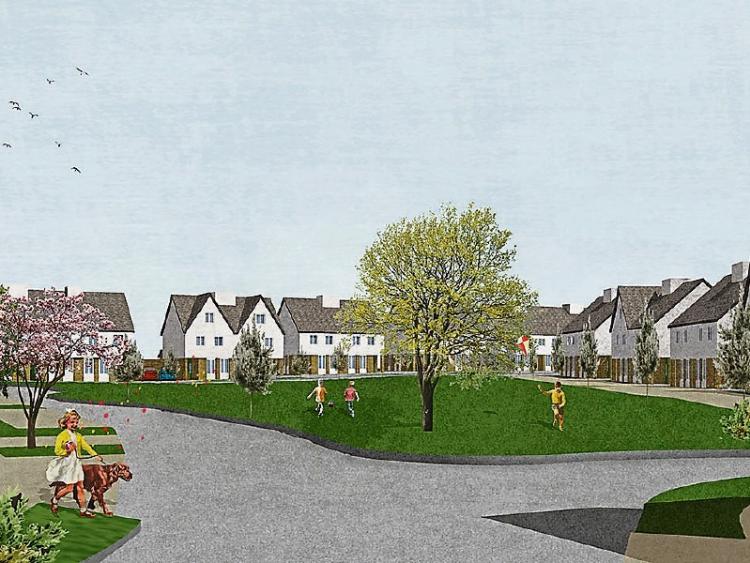 An artists impression of the proposed development at Ballymany, Newbridge

Concerns have been raised over a proposed Strategic Housing Development in Newbridge.

Glan Developments Ltd has plans to build 180 residential units at Ballymany, Newbridge. The application was lodged to An Bord Pleanála on November 2.

The 5.076 hectare site is at the Southern Edge of Newbridge. The application compromises of 145 two, three and four bed dwellings ranging in height from 2 to 2.5 storeys, 35 one, two and 3 bed apartments in a part four storey and part six storey block. The part 5 provision (social housing) includes 18 units, four houses (two and three beds) and 14 apartments.

The entrance comprises of a four to six storey landmark building with 35 apartments.

Concerns from Patricia Conlon, Senior Executive Planner in Kildare County Council centered on where the development links with Ballymany Manor and the landmark entrance building being overscaled for where it is. There were also concerns raised over how the apartments are designed. Ms. Conlon said access to them is a cause for anti-social behaviour.

Cllr Fiona McLoughlin Healy asked how a development of this size could be possible without the construction of a new interceptor sewer, that will connect Newbridge to the Osberstown Wastewater Treatment Plant.

Ms Conlon said the developer deals with Irish Water in this respect. Council official Joe Boland said water schemes are not the statutory role of the Council, and that it is Irish Water’s call.

Cllr Mark Lynch said he had concerns over the height differences of the homes, and plans for the main entrance.

Cllr Morgan McCabe said he had traffic concerns, and said having the landmark building at the entrance of the town would look ‘horrible’. He said visually it would not be attractive and scale-wise it’s too high.

Cllr Joanne Pender said she had concerns for plans to do all of part 5 in one go. Kildare County Council said the Approved Housing Body likes them to be grouped.

Cllr Murty Aspell made reference to the site at the opposite side of the road, which was granted permission for development.

Public submissions to An Bord Pleanála must be made by December 6 and a decision is due on March 1, 2019.